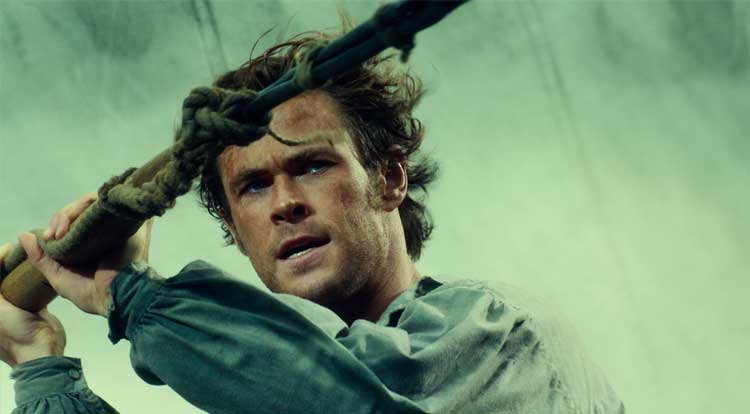 In what could be a risky move, Warner Bros. has pushed Ron Howard’s In The Heart Of The Sea back to December.

Ron Howard is a well known and respected director so when the first trailer was released for the Chris Hemsworth staring In The Heart Of The Sea the Internet took note. In 2013 Howard and Hemsworth worked together on Rush, which was well received and even grabbed two Golden Globe nominations, which continued to raise the level of anticipation for the new film.

A release date for In The Heart Of The Sea was initially set for March, but Warner Bros. announced yesterday that the film would be pushed back till December 11th; a mere one week before Star Wars: The Force Awakens releases. Why would Warner Bros. do this? Two reasons.

December has traditionally been a month when contenders for Oscars and Golden Globes release. Starting in the fall up till December is colloquially referred to as “Oscar Season.” Do potential Best Film pieces release at other times of the year? Sure, just look at The Grand Budapest Hotel from Wes Anderson, a March release. But, a high percentage of the nominated films will release during this time period.

Warner Bros. could, as most likely should, have faith in Ron Howard’s work that they believe In The Heart Of The Sea could be a potential award winner and they want to give the film the best shot by moving the release date back a few months.

With The Hobbit: The Battle of the Five Armies being the last of The Hobbit films, Warner Bros. has lost their big end of the year release from the previous three years. Could In The Heart Of The Sea be the film to bring in $200 million plus the studio has expected from The Hobbit trilogy? That is a hard question to answer.

The Howard/Hemsworth team up on Rush only brought in $26 million in 2013. Howard has another handful of films that have brought in in the range of $18 (Frost/Nixon) to $61 million (Cinderella Man). However, Howard has also made films that have grossed over the $100 million and $200 million dollar mark with films like The Da Vinci Code, A Beautiful Mind and Apollo 13.

The question is though, can Into The Heat Of The Sea make the latter type of money when, most likely, the highest grossing film of 2015 in Star Wars in release the next week? I choose to remain optimistic about it. Hemsworth is a money making actor, especially with Age of Ultron releasing in May, and the story of the film could draw in a different audience than will be going to Star Wars.

Ultimately the reason for the push back of the release wasn’t an either/or decision, but a combination of the two. In The Heart Of The Sea could very well be an award winning film and when the announcements are made it could give a boost to a film that was already making a decent return at the box office. A win/win for everyone involved.

In The Heart Of The Sea releases December 11th.