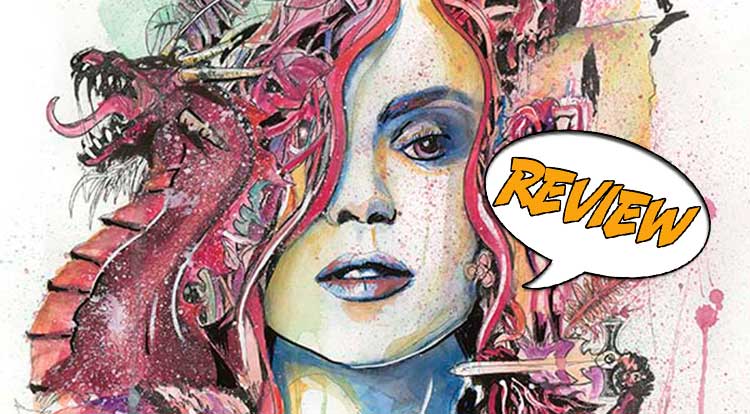 I’ve been reading a lot more Red Sonja lately, and with Gail Simone writing the main title, I couldn’t resist taking a look at Red Sonja #14. Previously in Red Sonja: Hired to rid their town of a despot, the She-Devil With a Sword has been cursed to kill anyone who slights her in the least.

We’ve seen Red Sonja kill with glee, kill for revenge, and kill in defense, but a cursed Red Sonja is one that is beyond anything I’ve seen before. In this issue, Gail Simone shows the warrior at the height of her insanity, and no matter what anyone says or does, forgiveness is not in her heart. Even when the last of the crew that killed her family begs and pleads that his life has changed, Sonja’s rage will not be satiated. It’s a really intense scene and Simone does a great job of showing a hint of remorse in Fellan and the total lack of care in Sonja’s voice.

Though the main story has me intrigued to know what happens next, there are multiple side stories that that are going to build and play out as well. What will the new evil wizard do? What of the apprentice? (They usually die, but this guy is pretty cool, so maybe not). And what will happen to the town who has lost its protector? Simone serves up little bits and pieces that are so well written in this issue, that even if we don’t see the completion of every subplot, I’m satisfied with what we get here.

In addition to the top-notch writing, artist Walter Geovani gives us art that is super creepy. The big bad introduced at the beginning of the issue sends shudders down my spine. The character design intentionally puts me at unease, so when Fallen appears later, he doesn’t seem as scary, even though he has plans to take out Sonja (and I don’t mean on a date). It’s been a while since I’ve read the main series, so I really like that she isn’t wearing a chain mail bikini. I understand iconography when it comes to character identification, but seeing the main character wearing region and class specific clothing is very welcome.

Geovani’s take on the region seems spot on as well. From the first panel to the last, the Norse theme permeates the issue. This gives the artist a chance to add the necessary detail to the villagers in the tavern, the background, and the woods where the big showdown occurs. Adriano Lucas’s colors tie it all together, establishing the proper mood in the bar, and the damp, dank, dark night of the woods.

Though I’m deep into the series, and don’t know exactly what has occurred before, Gail Simone and Walter Geovani’s tale grabs you. The horror of the big bad, the fight scene in the forest, and the final panel cliffhanger are superbly done. Red Sonja #14 is worth picking up when it arrives in stores on January 21, 2015.

Though I'm deep into the series, and don't know exactly what has occurred before, Gail Simone and Walter Geovani's tale grabs you.