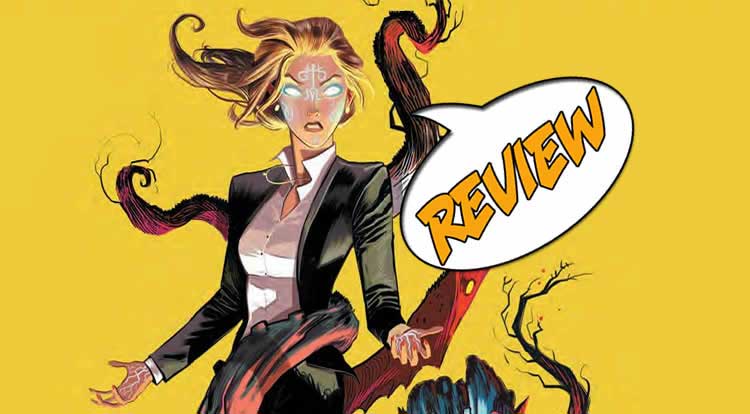 Women and the supernatural. I often find that combination to be a great read.

In BOOM! Studios’ tenth anniversary, they’re giving a lot of quality comics a chance. I always appreciate that. I’m glad that includes Hexed coming back, so it’s been a great Wednesday for me all around!

Previously in HEXED: The start of a brand-new arc, a perfect jumping-on point! The chaos at the gala may be over, but a whole new set of problems emerge for Lucifer as she attempts to recover the stolen artifacts from Val’s demolished gallery and enters into a magical arms race with Madame Cymbaline that’s nigh-unwinnable.

I’m a long-time fan of Michael Alan Nelson’s writing, so I was particularly happy to see Hexed return after its initial run at BOOM!

If you’ve read my reviews and columns, you know that it’s important to me when a scripter can balance action with drama. Mr. Nelson is one of the best, in my opinion, and he brings that clearly to bear in this issue.

It doesn’t take long before Lucifer, the book’s female lead, and her intern are driving at breakneck speeds as they attempt to retrieve a totem. They’re chasing a lady baddie and her male assistant as they try to get away.

I love strong female characters in comics. I don’t think there are nearly enough of them, frankly. I am particularly gratified when I hear Mr. Nelson say it isn’t the gender of the character that matters, but that he or she is an interesting and relatable person.

Lucifer is just such a character. She just happens to be a woman, and that makes her all the more enjoyable to read. I also like that her name is Lucifer, which is much like Jesus in the culture she grew up in.

Things continue at a rapid pace, with some slower sequences to let us catch our breaths. Also, supernatural events are clearly explained and understood, something I wish more comics, not to mention TV shows and movies, did a better job of.

THE ARTWORK MATCHES THE TONE OF THE WRITING

Much like a writer’s ability to keep both drama and action going, an artist needs to be able to show us good facial expressions as well as movements.

Dan Mora does his usual excellent job in both categories. I truly enjoyed one sequence when Lucifer and her co-hort come face to face with a powerful weapon. They instantly shift from glee to terror, nicely done by the artist.

I also liked the stand-off between Lucifer and Banshee with two hostages in the crossfire. Both Mora and Nelson know when to make things move and also when constantly doing that would feel like a video game. Conflict is the essence of drama, not endless fast movement.

There’s also a creative shift from full-page art to a variety of panel layouts, all of which keeps our attention. I always find myself turning the pages quickly to find out just what’s going to happen next. Then the final page makes us wonder just what will happen next, when Lucifer is offered her heart’s desire.

I often complain about how poorly supernatural events in comics are handled. When the writer has painted himself or herself into a corner, the (in)famous “Woo-Woo Ray” appears, something that we’ve never had any indication of seeing suddenly appears and resolves the situation.

Nelson and company NEVER do that, thankfully.

The characters shine, the scripting is powerful and the art is eye-popping. What else could you want from a comic?

To find out more about Hexed, go to my recent interview with Mr. Nelson at this link! I always learn a lot when I chat with him, and I think you will, too!