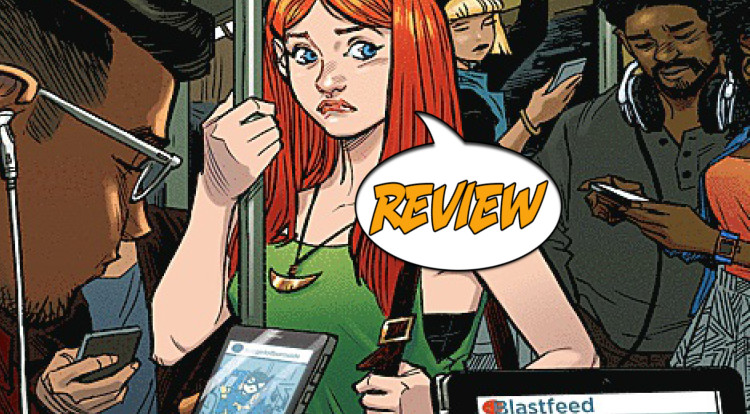 Batgirl #38 has Babs learning the pitfalls of social media and celebrity while she takes down a Justin Bieber analogue. Previously in Batgirl #37: Babs takes down her sparkly nemesis and learns how to take hold of her digital footprint.

I’M OVER THE EASY ANALOGUE

Unsurprisingly, I read a lot of comics in a year and often read a lot with female-centric characters. In the past six months I have probably read ten different Justin Bieber analogue characters and I’m sick of it. They’re all young, rich, jerks and, yes, they are probably apt comparisons given all the press, but he is such an easy target that I’m sick of the Bieber-analogue in comics. Batgirl under the ministrations of the Stewart/Fletcher writing team has been getting better and better and this uninspired move in the choice they’ve made for the villain of Batgirl #38 nearly derails the entire issue.

Throughout this run Babs and Dinah have been living together out of necessity with a lot of tension between them. It seemed in previous issues that they had come to an uneasy truce, but in the opening pages of Batgirl #38 Stewat and Fletcher have Dinah lose her patience with Batgirl’s ever pervasive social media presence. This leads to a greater rift between the former Birds of Prey teammates and also – inexplicably – leads to Dinah joining a band? Yeah, Black Canary as a singer is a cool metaphor and was really neat when the Bombshell covers did it in 2014 – but I worry that the writing team has effectively pigeon-holed Dinah out of a supporting character role in the remainder of the Batgirl series.

The B-plot of Batgirl #38 has Babs making good use of the tinder in-continuity analogue hooq. She is digitally connected to a GCPD officer named Liam who works with her father … so that would seem to cause some tension right off the bat. Liam, for his part, loathes Batgirl and repeated points out the civic irresponsibility that comes with vigilantism to a Barbara who does her best to defend her bat-ly actions while narrowly avoiding giving herself away. They seem like a dangerous pair inherently given their respective occupations and the narrative of Batgirl #38 throws the validity of the match further into question when Babs’ roommate (who either works for or is a founder of hooq), states that weird matches have been popping up lately in the app.

My prediction right here is that: Liam turns out to be a villain or J. Jonah Jameson of this series.

Batgirl #38’s action comes from a chase scene wherein Batgirl tries to stop Barberi (yes, the analogue). The unfortunate thing about the chase is that Barberi earlier bated her into this race, thereby getting exactly what he wanted (the adrenaline rush and publicity), and making Batgirl’s image shift to that of a dangerous vigilante. Not to mention the fact that Stewart and Fletcher have made their female-in-a-leading-role seem not only petty, but weak minded. It’s not an inspired plot point and it plays out about as effectively on the page.

That being said, by the end of Batgirl #38 Barbara is forced to carefully examine her new approach to Batgirl-ing and there is a nice scene around that, saving the issue from being a total wash.

Batgirl #38 is Babs Tarr’s best work on the series to date. Her work has really graduated into a controlled, well-executed style that deserves to be showcased in a popular book. As Batgirl and Barbara Gordon our protagonist is easily the most stunning figure on the page and in her own book she should be! Tarr handles the beautiful fighting girl trope with aplomb and Barbara/Batgirl still looks like a real girl who could be walking around in Burnside today.

Speaking of Burnside, it has been a lot of fun watching this previously unmentioned neighbourhood in Gotham City come to life and Batgirl #38 is the first time it really feels lived in. We even get a chance to see how Batgirl’s actions can have a direct effect on the businesses in the area she patrols.

In Batgirl #38 the art is definitely the star of the issue.

If you are a dedicated reader of this series then Batgirl #38 probably won’t blow your socks off, but it looks good and there are enough nice, small moments to sustain readers who are really invested in Babs and her cohorts.

Unfortunately, not the best issue in this new series. Batgirl #38 relies a lot on easy tropes, but offers some real drama between Dinah and Barbara and forces Babs to take a hard look at her vigilante life.