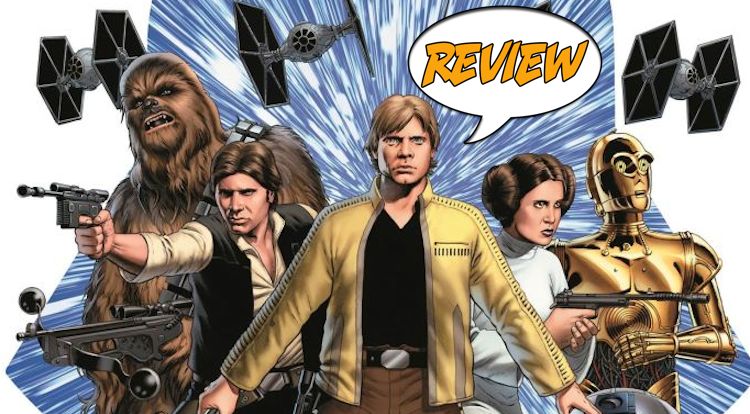 Previously in Star Wars:  The Galactic Empire has suffered a crushing defeat at the hands of the Rebellion, losing their ultimate weapon: The Death Star.  Now the Rebel forces are gathering for another attack as the Empire prepares to make a stand.

I THINK I KNOW HOW THIS ONE ENDS

Star Wars #1 is a huge deal in the comic community.  Marvel reacquired the rights to publish in continuity stories and brings Jason Aaron on to write the main title.  Many were pleased with what Dark Horse did with the franchise so seeing Star Wars back in Marvel’s hands is both exciting and nerve racking.  Will they mess it up or create something completely new and amazing?  Well…

Taking place after Episode IV, the Rebellion is in full swing after recently destroying the Death Star and dealing a devastating blow to the Empire’s plans.  This is very much an introductory issue and while little setup is given (or needed), we see Han Solo acting as Jabba the Hutt’s intermediary between the Empire.  Of course, this is a huge ruse to infiltrate and take out one of the Empire’s operating stations.  Luke and Leia pop up, there is some fighting and Luke finds the station is secretly being used for other, more nefarious means.  Jason Aaron proves that he knows the Star Wars universe very well and is able to write each character distinctively.  It’s near impossible not to hear the character’s voices as you read the dialogue and the issue very much feels part of the movie universe.  That’s problematic though, as it pushes Aaron into a corner.  Characters make strange choices in context because Aaron can’t deviate from the movies.  Why doesn’t Vader Force choke Chewbacca rather than crushing the tower Chewie is sitting in, especially after awesomely using two Stormtroopers as human shields?  The answer: because Chewie can’t die.  And that’s my biggest problem with this book.  We know how the story ends for these characters, so the stakes aren’t high enough to create enough tension or make the reader care.  The cliffhanger promises an altercation between Luke and Vader but is it something I need to see again?  I might like to but I know neither one will get hurt. That doesn’t happen until Episode V.  There are some good moments and humor, my favorite being C-3PO’s concern over the Millennium Falcon constantly being mistaken as trash.  It’s a decent issue and Star Wars fans won’t find much to gripe about but there is no reason to read it, other than to read yet another Star Wars comic.

STAYING TOO FAR INSIDE THE LINES

John Cassaday’s art in this issue suffers from what I call having to “stay too far inside the lines.”  Clearly using photo reference, Cassaday limits and hurts his work by making his character’s faces look exactly like the actors who portrayed them.  This leads to facial expressions and angles that look odd to downright horrible.  If he had allowed himself some more wiggle room, I believe Cassaday would have turned in some much better art, but sticking so close to photo references made the issue suffer more than it should and is not what I expect from a top tier book.  There is little flow to action and figures are stiffly posed, making scenes boring at times.  Cassaday does draw some amazing machinery and space vehicles though.  All the ships and vehicles have an insane level of detail and look exactly like the movie counterparts.  It’s not enough to save the book unfortunately and the art was certainly one of the least enjoyable aspects of the comic.

Chances are if you’re a Star Wars nut, you’ll be buying this regardless what I write.  Hardcore fans are sure to enjoy but I don’t think the average reader or fan will be blown away.  It’s a decent story but its fault lies in the lack of tension or stakes due to taking place in the middle of a story we know the ending to.  We know who lives, dies and is brother and sister, leaving little new territory that Aaron can take us.  The art is extremely poor and not what I expect from a high profile book and creator.  Don’t believe the hype surrounding Star Wars #1 and its selling of a billion, gazillion copies in the direct market.  It pains me to say it but it’s just another mediocre Star Wars story and can be skipped.

Star Wars #1 is a disappointing start. With an average story and bad artwork it fails to live up to the hype.