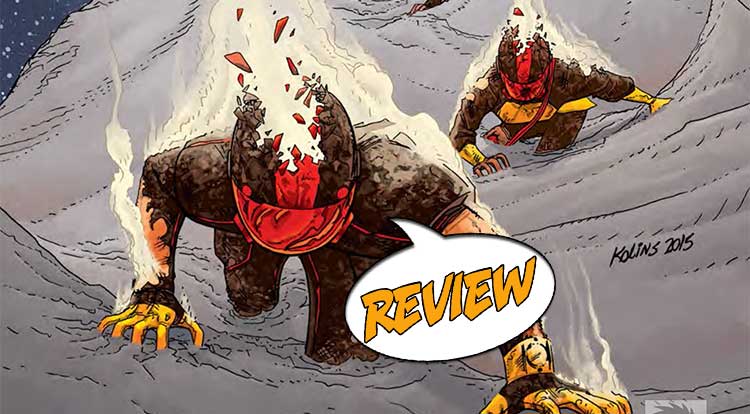 We talk quite often about anthology books, but we review very few. Time to correct that with this look at Dark Horse Presents #3. Previously in Pastaways: Apparently time travel is a big thing, and the time traveling team is off on another mission.

Mind blown? It should be, and with the chronobeacon busted, seeing how this team functions in the crazy times of our present is going to be really interesting.

The art in this story is really cool. Scott Kolins has to fill the page will foliage, rocks, and dirt in order to make us believe the team has landed in the time of the dinosaurs.

Previously in Semiautomagic: Something about video games stealing your soul…

Though I have no idea what has come before, I was instantly on board with the story of Alice Creed sent to New Mexico to try and bring back the psyches of missing children. There is a lot of backstory here that is something that can and should be explored if it hasn’t already, as this world of magic has a lot of rules.  Alice and her sidekick head out to an abandoned base only to discover that the base isn’t abandoned, and that a nuke is about to be tested at the facility. If the nuke goes off, then a great evil will emerge into our world.

I love stories that blends crime drama with magic, and Semiautomagic brings it all together. Add in a strong female protagonist and a spooky dead girl, and this story alone has me looking forward to the next DHP issue.

Jerry Ordway art is always a joy to look at, and he has a way of using the best layout and framing to heighten the terror and suspense that unfolds in this story.

This is the closing chapter of this story that finds our hero wrestling with the biggest and baddest of demons in the ring of death. Thanks to the help of his ghost wife, the hero wins, makes a lot of money, and most importantly, gets his daughter back from whoever was holding her.

This is an okay story that wraps very quickly in the few pages Palmiotti and Gray have been allotted. It’s always good to see the duo working together, but this concluding chapter suffers from not enough information on the characters, and a jump from the end of the fight to the epilogue taking place six months later.

Andy Kuhn brings scary monsters to life, and if you think the big bad looks a lot like a character missing the Right Hand of Doom, then you and I are on the same page. I like thick lines, and colors used in this story, but for some reason I’m somewhat turned off by the relaxed composition. The action and tension seems to decrease because of this.

I have no idea what is going on in this story, but it is a trippy journey between life and death for the main character. The mythology is crazy cool with giant pikes, ravens who represent death, and reeds and roots trying to drown the main character. The art is mind blowing, and love that Simon Roy breaks with conventional layouts and creates a flow that pulls the underwater theme together. This is the first chapter, so I’m sure something even better is coming, but I was generally cool with this story.

Previously in The Mighty: “As the world’s only superhero, Alpha One has become an icon of hope in uncertain times. But while the population is inspired from a distance by their savior, police captain Gabriel Cole has gotten close enough to discover that Alpha One’s plans for a utopia are more radical than anyone suspects!”

Gah… The Mighty was an interesting story when it arrived a few years ago. While we are getting a look at events that occurred years earlier, I just can’t get into this book as we know Alpha One is a terrible person and his every move is that of a serial killer. The creative team did a fine job of telling a story and creating visuals, but I just don’t like the psychotic central “hero”.

What happens when your brother-in-law is a druggy loser, with no hope for redemption? The answer, Dear Reader, is probably one you don’t want to discover, as it turns a dark story into a nightmare. Adding to the dark story is the black and white wash Brian Level brings to the page. I really hope this is not a one-shot story, but the central character continues his crusade to change people’s lives. I want to see him get his comeuppance. Great shocking story, and perfectly placed as the closer for this book.

I have always been a proponent of the anthology series, but the nay-sayers continually point out that you could be paying $5.00 for an eight-page story, with the rest being complete duds. What makes Dark Horse Presents work, is we aren’t getting three stories – six stories pushes the odds that there is going to be more good than bad in the book, and in this issue I really enjoyed four of the six, and feel the money is well spent for those who want fast reads in an collected episodic form. The biggest drawback for this issue is that two of the stories are conclusions, and one drops us in the middle. I’m okay with this for the most part as it is pretty easy to figure out what is going. In other words, the editors and creators know that their stories are going to be broken up and structure the narrative to work in the short burst form.

The good stories outweigh the bad ones, and getting six short stories for $4.99 is worth the price. I'm a fan of the anthology series, and Dark Horse Presents shows how to make it work.