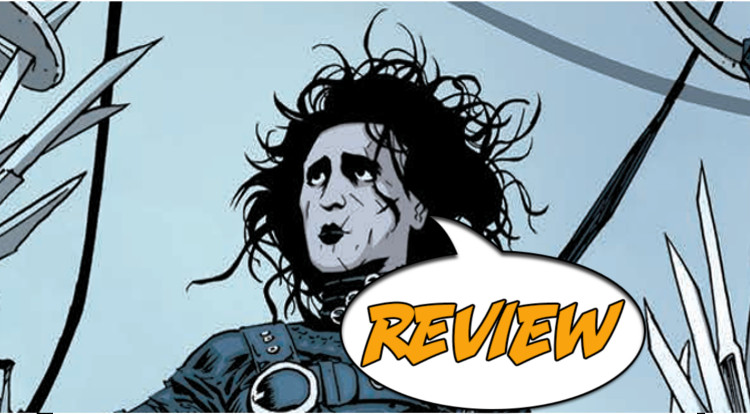 Edward Scissohands #3 has Megs and Edward finally meeting and both of their worlds begin to crumble accordingly. Previously in Edward Scissorhands #2: Megs’ detective work leads her further into the past, as she struggles to uncover the truth about Edward. At the castle, Edward searches for Eli, the unfinished creation with a penchant for taking things apart, unaware that he’s slipped out into the shadows of a sleepy suburban town.

Edward Scissorhands #3 is the very definition of cute with a quirky undertone. Writer Kate Leth is known for collaborating with the Welcome to Night Vale team and brings just the right twist to a story about a granddaughter investigating the legacy of her maternal grandmother. Megs, for being a footnote at the end of the original Edward Scissorhands movie, is a pretty great protagonist. She’s brave and bursting with conviction and just defiant enough of her parents to remind readers of our own past behaviours.

To the plot itself, Edward Scissorhands #3 opens in the iconic mansion with Megs and Edward coming face to face for the first time. Even two generations later Kim has left a lingering impression on Edward, which likely explains why he is so willing to trust Megs right out the gate in spite of the fact that Leth has given readers no evidence to suggest that Edward has been treated well by anybody in the intervening years. For all his solitude and the obvious missteps he’s made in the creation of Eli – who may or may not be a murderer by the end of this issue – Edward is fairly well adjusted.

Megs follows Edward into the mansion, learns about Eli and the potential danger he presents and Leth pens an easy trust between the two protagonists. They understand each other in their overly verbose habits and limited vocabulary respectively and it’s just unfortunate that on page they are ripped apart for the rest of the issue and the story spins its wheels.

From this point moving forward all Edward Scissorhands #3 is is Megs hiding from her parents. Much like Kim, Megs is withdrawn from her parents in order to protect the secret of Edward and his existence. Leth puts this on the page in a very immediate way by having Megs lock herself in her room. It is a little bit anti-climactic – even a face to face altercation would have read as more dramatic – but by having Megs and Edward both experiencing isolation at the same time in separate locations they come across as connected through the mirrored narrative.

Despite the fact that the plot is a touch lacking in drama, Edward Scissorhands #3 is a surprisingly charming read. It is not a comic property that I expected to work, but Leth has peppered in enough mythology from the original film that this story feels like a logical continuation of that same narrative rather than forced in the way that many licensed comics can feel. Megs is sweet and hard-headed, Edward is innocent and lonely and together they appear destined to get up to mischief in the wake of Eli’s wandering about their hometown.

Artist Drew Rausch, like Kate Leth, takes on the monumental task of balancing readers’ aesthetic expectations based on the design elements of the much aforementioned Tim Burton film, whilst preserving his own unique style. Lucky for anybody who picks up Edward Scissorhands #3, Rausch has struck the perfect balance with his art.

Rausch’s work throughout Edward Scissorhands #3 is actually much more akin to Johnen Vasquez than Tim Burton. The characters are all sharp angles, skinny bodies and round eyes. Megs, for her part, look almost perpetually terrified, even when she reaches the point of trusting Edward. Mr. Scissorhands, for his part, comes across as the wide-eyed innocent; this is an interesting paradigm shift given the fact that Edward is the better part of a century older than Megs.

As for their respective character designs, Edward and Megs don’t really recall the actors who played them. They are cute and unique. It would be impossible to mistake them for any other character on the page in a given moment and this definitely speaks to Rausch’s strength as an artist.

The scene work by Rausch in Edward Scissorhands #3 is oppressive. Buildings and trees are skinny and they lean in, reaching down and over any characters on the page as if they were about to be snatched into a great claw machine. It’s executed subtlety, but leaves readers with the overwhelming sense that danger could strike at any moment.

More than anything else, Edward Scissorhands #3 has a very definitive art style that is both fun and intelligent to experience as a reader.

THE BOTTOM LINE: EDWARD AND MEGS ARE DARK DARLINGS

Edward Scissorhands #3 is a much better issue than I expected. It is darlingly unique and handled by a creative team that have managed to differentiate their work from the source material. If you’re into dark fairy tales starring teenaged girls than this is an issue for you.

Edward and Megs finally meet in an issue that starts out very interesting before they are separated and we spend the rest of the time spinning the narrative wheels.