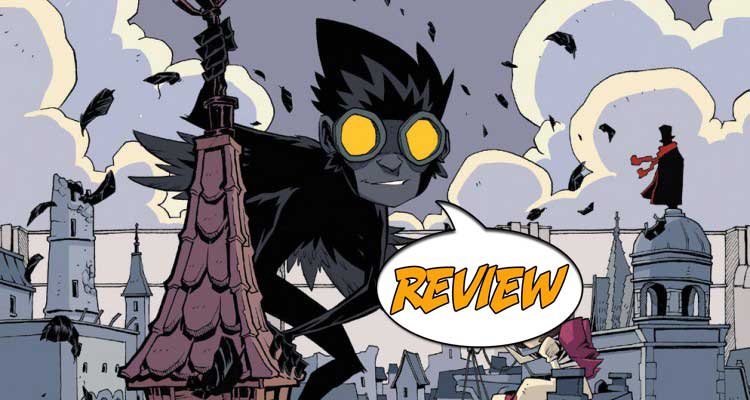 He’s the dark mysterious hero that all villains fear! Batman? No! Darkman? NO! He is Poe, and we breakdown his adventures in this review of Feathers #1. Previously in Feathers: Another first issue, and as things go, we don’t have much to put in this area. That being said, this is a good place to tell you what happened BEFORE the main events of this issue…

A long time ago (eleven years to be exact), in a place far away, two unknown voices have a conversation regarding an old man finding a baby covered in feathers. Will the baby grow up to save all of us, or will something terrible happen to the young lad? And what about that mysterious man in red who seems to be taking children?

The boy has grown up to lurk in the shadows, and those in The Maze refer to him as The Ghost. Bianca lives in the White Walled City and lives a life of comfort. Ya see, The Maze represents the slums and lower class, while the White Walled City represents wealth and good times. Class warfare is certainly a key element of the story, and when you throw in upper class girl with lower class “monster”, Feathers feels very much like Romeo and Juliet meet Beauty and the Beast. It isn’t a terrible way to tell a story, but if anyone goes in thinking this story is anything other than that, they might want to read the story again.

I don’t know if it is a groan worthy moment, or a nice nod, but our fine feathered boy is named Poe… perhaps after Edgar Allen Poe and his story of The Raven? Whatever the etymology of the kids name, I’m willing to roll with it in this issue, especially as we learn more about the character and how he becomes a mysterious hero for the downtrodden and a foil for the evil doers (criminals, soldiers, etc.) that plague the city.

Unfortunately, we won’t find out much about those hero activities as Poe ends up with Bianca and more than likely will be accused of kidnapping her. This will lead to a lot of other complications as the series progresses if I had to put money on it.

From the very first page, Jorge Corna’s art looks very familiar. This is comforting on many levels as there isn’t anything that really requires the mind to try and sort things out. It feels like a cross between Mike Mignola and Royden Lepp with a dash of Skottie Young thrown in. It is really pretty to look at, and is the real star of this issue.

Adding to the lines and composition are the fantastic colors that help to showcase the differences between the classes, and make Poe even more mysterious. I flipped through this issue more than a few times just to see how the color added to the issue.

Overall, Feathers is a nice, kid friendly (8+) story that is a nice flight of fancy for those who want to get their fantasy fix in. The underlying conversation of class may be a bit much for younger readers, but hopefully it can serve as a point of discussion between grownups and children. The art is fantastic and worth the price, just to look at. Feathers #1 is definitely an interesting book, and I’ll check out the next issue just to see if my suspicions of what happens next turn out to be true.

Overall, Feathers is a nice, kid friendly (8+) story that is a nice flight of fancy for those who want to get their fantasy fix in.