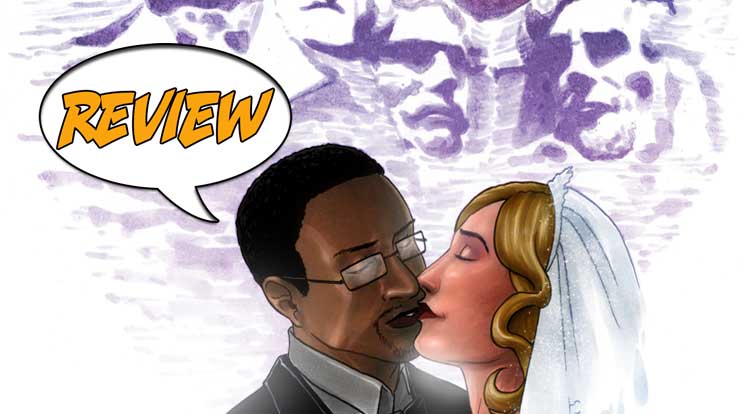 I’ve said it before, but it bears repeating! It’s really encouraging to see a lot of new, up-and-coming comics companies telling great stories. This month, I want to continue to focus on a great group of comics creators!

In episode 154 of my Wayne’s Comics Podcast at this link, I recently chatted with two of the folks behind OSSM (pronounced “awesome”) Comics. I truly like what I’m reading from them, including Monomyth, Thaniel, Foster and Xenoglyphs. That last one was a miniseries leading into the book I’m reviewing this week, Separators.

Previously in SEPARATORS: Twists and turns are ahead as Dom and Jennifer meet with Jen’s family. Steven continues to hunt the Fire Xenoglyph in New York City, putting him face to face with its bearer, Bailey. Will he finally get his hands on it, or will Anubis get to Bailey first?

I often talk about my disdain for magic in comics and other forms of entertainment because so very often, magic is the “woo-woo ray” that ends up resolving every situation. You didn’t read about how magic can defeat super-rabbits? Well, the main character is surrounded by them and, guess what? He or she can whip out a spell that will defeat those durned magical rabbits. I HATE it when that happens.

What’s taking place in Separators (and in Xenoglyphs before it) is a clearly defined premise along with very real characters having to deal with a serious menace.

Omar Spahi did a great job of setting up, then telling us what happens to the people in these books. Each person is his or her own character, and I like that a lot.

Also, the magic in these books is easy to understand. We can figure out just what’s going on, as well as what we want to see happen and what we don’t. The story also explains some historical happenings through the Xenoglyphs prism, and it explains a lot of things I didn’t understand before – in this universe, at least.

The story moves along at a good clip, with important character bits in between. We need those in order to understand them and to care about what they’re going through. Spahi has done an excellent job of knowing who they are and where they’re going.

I want more, and this second issue continues the story from the first. The cover indicates that there’s a wedding taking place, and we do get to see that in this issue! Also, I continue to be impressed by the humanity of the characters. Spahi brings us to important moments in their lives. Even though they have a critical mission to complete, they still are “real” people, and I think that’s often a rare thing to find in comics.

We also find out more about the Fire Xenoglyph, and it may be my favorite one so far!

THE ARTWORK HAS A PAINTED FEEL

Catacutan’s art has a painted feel to it, and it’s very much the opposite of the detail-oriented offerings of, say, a George Perez. I like it because we’re flowing in a magical setting, and we get the right amount of detail to know what’s happening without taking away the story’s mystery.

When the good guys take on the bad guys, the setting is often darker. I like that because it demands my attention.

Also, Separators and Xenoglyphs continue to take place in a lot of foreign locales, and Catacun’s art transports us there quite effectively.

Unfortunately, having less detail can also be a disadvantage. There are a few panels I found harder to figure out what was going on. Still, those were few and far between, so I’m anxious for the next issues!

I’m very excited about what OSSM Comics is doing, and Separators looks to be their flagship title. Good choice!

I like the mystical/supernatural elements of the Xenoglylphs and their impact on history as well as how they influence the characters. I also am impressed with all the possibilities and the relationships among the people and how they’re growing.

To find out more about OSSM Comics including Separators, go to their website at this link! Many of their books are hitting local stores this week, so keep an eye out for them! They’re definitely worth your time, effort and money to find!