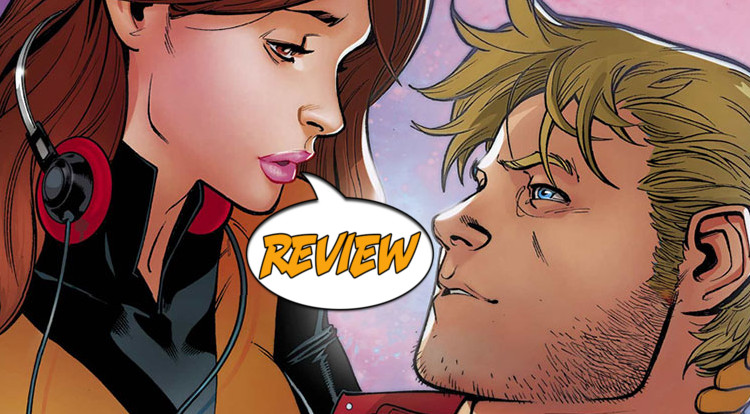 Legendary Star-Lord #7 is a pretty cute issue that allows Kitty Pryde a moment of heroism amidst the development of an intergalactic war. Previously in Legendary Star-Lord #6: Peter desperately attempts to keep a phone date with Kitty while simultaneously getting wrapped up with Mister Knife and his crew!

IT’S KIND OF A CUTE STORY

Legendary Star-Lord #7 isn’t too much about Peter Quill. It’s about a 50/50 split between Peter and his new girlfriend Kitty Pryde. Now that is something that writer Sam Humphries really nails – the colloquial tone of Star-Lord and the light-hearted qualities in his relationship with Kitty. They are dating, but they’re not that serious. At one point in the issue Lydia even asks Kitty if she loves Peter and she replies that she doesn’t want Peter to die, which is not so much a confirmation as far as I’m concerned.

Something readers learn about Kitty Pryde in the pages of Legendary Star-Lord #7 is that she hates spaces. She even references the last time she had a big galactic to-do in space and rode a bullet through the earth (yeah, that story is about as silly as it seems), as the main reason for her reticence, but for whatever you want to think about Kitty Pryde she is a proper heroine and isn’t about to let anything happen to Peter Quill on her watch – least of all at the hands of his father.

So, Legendary Star-Lord #7 opens with Kitty and Lockheed on a rescue mission. In fact, she’s stolen an Avengers spacecraft and may or may not crash it into an asteroid. Thankfully, Lydia is present to do most of the heavy steering.

For his part, the titular Legendary Star-Lord #7 spends the bulk of the issue in is underpants. I’d like to give Sam Humphries (and artist Freddie Williams as well), credit for having their female protagonist fully clothed and capable throughout the issue and their leading male protagonist be the objectified person for a change. J-Son, erstwhile, has declared himself a Czar and gone under the name Mister Knife in order to hunt down Peter. The father/son team largely engaged in emotionally destructive banter under J-Son reveals his plans to brainwash Peter into supporting his reign as Czar.

Fear not, readers! Humphries won’t stand for Peter Quill to undergo too much suffering and Kitty quickly crashes in to save the day. My main criticism of Legendary Star-Lord #7 is that the rescue itself is too easy and too cute. From the first page of the issue readers know that Kitty is going to save the day and in the span of fourteen pages Peter is already back safely on Kitty’s spacecraft. I’m all for female characters saving the day, what I’m not for is narrative structure that is so polished its predictable. Yes, they are cute together and the banter is quick, but ultimately it’s not enough.

In the final moments of Legendary Star-Lord #7 Humphries elects not to focus on the two protagonists, but where exactly J-Son has gotten off to. There is a big reveal on the final splash page that dedicated Marvel readers will recognize and its obvious from this move that Humphries is much more interested in playing in the cosmic Marvel universe than dealing with the cast of the book his is writing.

Overall, Legendary Star-Lord #7 is a quick read, it has some sweet moments, Kitty Pryde kicks butt and there are implications of an ever expanding cosmic horizon. It’s pretty good.

Freddie Williams is on pencils for Legendary Star-Lord #7 and he’s an excellent choice. The spacescapes and alien constructs (buildings, ships et al), are all sleek, aerodynamic and aesthetically very, very pleasing. His design is clean in a way readers have come to expect from in-house Marvel artists and that extends to all aspects of his work within this issue.

Peter Quill and Kitty Pryde are stunningly beautiful characters within the pages of Legendary Star-Lord #7. Williams gives readers a half-page splash of the two characters pressed against each other out in the sparseness of space (in a pose that very much recalls the Star-Lord/Gamora scene from last year’s Guardians of the Galaxy movie), that is just breathtaking. It’s the kind of image that will likely end up on a poster – if not a Hot Topic t-shirt.

Williams is putting out the kind of work in Legendary Star-Lord #7 that could really elevate this book to e something remarkable if the writing were at the same level.

Cute is the best word for me to describe Legendary Star-Lord #7. The story is simple, maybe a little lacking, but the art is stunning and will keep readers on the page. If you love these characters or are into the series so far it’s worth picking up.

The titular Star-Lord is kidnapped by his father and Kitty Pryde takes off into space to save her boyfriend. It's cute, but unfortunately, the issue doesn't get any deeper than that.