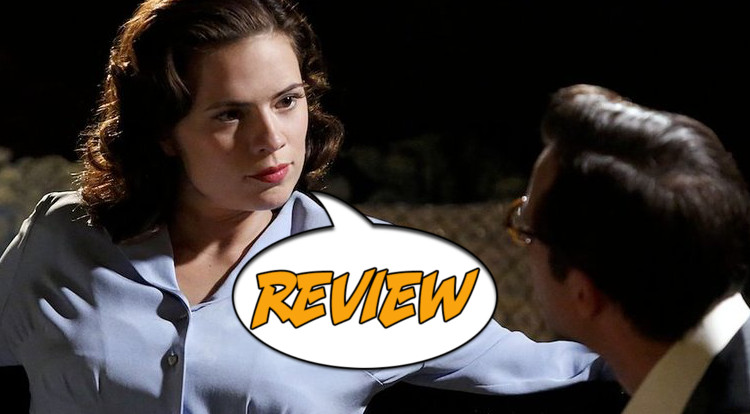 Agent Carter episode 1.2 “Bridge and Tunnel” aired immediately after the pilot on ABC and Peggy continues to punch the patriarchy whilst reluctantly teaming up with Jarvis on the trail to clear Howard’s name. Following in the same vein as the Agent Carter pilot, Agent Carter episode 1.2 “Bridge and Tunnel” spiritually – and in exact air time – furthers Peggy’s quest to clear Howard’s besmirched name and sets down a lot of building blocks for the rest of this first series. It is also worth noting that Bridge and Tunnel was directed by Joseph V. Russo (one of the famous Russo brother who directly Captain America: the Winter Soldier), and also deals with more espionage than the previous episode … and I’m assuming this was very much by design.

The crux of Bridge and Tunnel is Edwin Jarvis played outstandingly by James D’Arcy. Following his performance in the Agent Carter pilot I didn’t think I could enjoy watching D’Arcy anymore, but when Peggy (the outstanding Hayley Atwell), is determined to recover Howard’s stolen intellectual property that has recently become recognized and insists that Jarvis merely drive her there and then return home to safety, he disobeys! It’s a nice move on the part of writer Eric Pearson to have Peggy in the position of power and forcing Jarvis into flights of creativity in order to prove his worth as a team member (and it should be lost on nobody that this is the same thing Peggy must do in order to prove her worth to the men at S.S.R.) – and Jarvis is really, really useful!

If it was obvious from the pilot, Bridge and Tunnel cements the fact that Peggy (with the notable addition of Alfred … I mean, Jarvis), will be operating to clear Howard’s name outside of her capacity as an S.S.R. agent. Initially, this doesn’t seem like it is going to be much of a problem because Roger Dooley (Shea Whigham), sends her away anytime something hairy is about to go down and Krzeminski (Kyle Bornheimer), just being a terrible misogynist all over the place. Much to the credit of Pearson, he’s a better writer than that and it doesn’t take long before an S.S.R. task force is on Peggy’s tail – though they definitely don’t know who they are chasing.

Peggy, to her credit, takes less than the span of Bridge and Tunnel to realize that Jarvis may be an asset to her crusade after all … even if she can’t bring herself to say it out loud just yet. For her part, Hayley Atwell’s performance is wonderful and the limited combat she gets to perform on screen she executes with aplomb – even when standing in high heels. We also get a nice little peek into Peggy’s personal life. Following the loss (which I won’t spoil), from the pilot Peggy is still looking for a new place to live and although she is reticent to get closer to Angela (played by the adorable Lyndsy Fonseca), it is as rewarding to see her open up to a female peer as it is to see Peggy accept Jarvis into her life.

Writer Pearson really ups the ante with the mystery in Bridge and Tunnel. Clover Dairy yields up little answers to Peggy badass lady detecting and Brannis, when he’s finally cornered and it is all she can do to keep from being discovered by the S.S.R. herself. A small revelation was gained in the course of Bridge and Tunnel and a small piece of the mystery was chipped away. It feels sufficiently satisfying without the creative team feeling like they’ve run away with the plot too much.

Lastly, it bears mentioning, the Captain America radio show! Whether or not you are a fan of Ralph Garman and whether his position as the host of the radio show is a little forced, it’s a really clever little addition to the Peggy Carter mythos. Throughout Bridge and Tunnel we see the actors recording in the studio and hear the audio drama play over some of Peggy’s altercations. Not only is a nice nod to where Captain America and Gold Age Comics came from, but it’s also a nice callback to Captain America: the First Avenger which was Peggy’s first theatrical appearance in the contemporary MCU.

THE BOTTOM LINE: WHY AREN’T YOU WATCHING THIS

Agent Carter episode 1.2 Bridge and Tunnel has Peggy punching the patriarchy, a fun story and a self-awareness sorely lacking in many other tv shows. You should check it out. You know you want to.

Agent Carter episode 1.2 "Bridge and Tunnel" proves to Peggy that she needs Jarvis, gives her a new home and brings her a tiny step closer to clearing Howard Stark's name. Who are you kidding, you know you want to watch it!