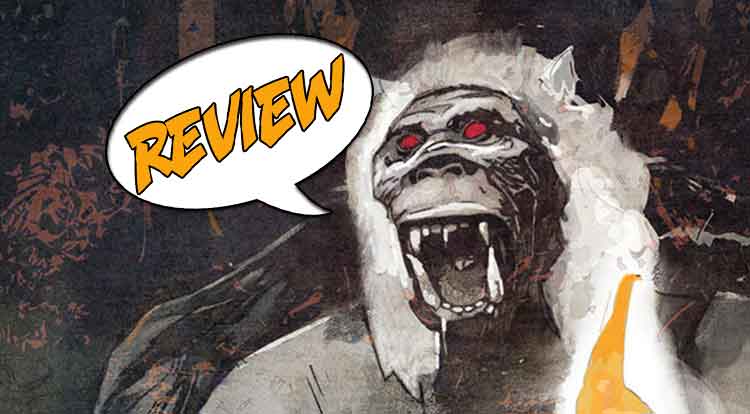 By Stephen Schleicher on January 7, 2015 0 Comments

It’s 1952, and strange things are afoot in a small village in Brazil. Professor Bruttenholm has dispatched his B.P.R.D. team to investigate, and he’s also asked them to take Hellboy with them. Brilliant move or trouble for all? Let’s find out how things play out in Hellboy and the B.P.R.D. 1952 #2! Previously in Hellboy: “In 1944, Professor Trevor Bruttenholm witnessed the arrival of a strange creature in a crumbling Scottish church. He named the creature Hellboy, and made a home for him at the newly founded Bureau for Paranormal Research and Defense.” Eight years later, and Hellboy is about to embark on his first mission to find out who is killing the villagers in a small town in Brazil. To make matters worse, someone on the team is looking to “take Hellboy out”.

Open a comic with a priest and an alter boy reciting Latin while trying to rid the town of demons and you have me hooked. The deal is sealed when the priest bites it and the monster looks like a demon ape, and I “pray” that Hellboy can save the day. I just hope he can save himself first.

The second issue of this series has me remembering everything I loved about Mike MIgnola’s run on Hellboy. An unknown creature, a shifty villain who may tangentially connected to the goings on, and Hellboy completely out of his element make for a story that draws me in. Though the ape monster looks more like an escaped animal act from the local movie production company looking to ease his pain instead of a demon from beyond, that weird WTF moment of seeing something that just doesn’t make sense turns out to be so much more interesting than a giant Lovecraftian tentacle emerging from a crater in the ground. Likewise, seeing Hellboy on his first mission without a clue how to act or react to the situation makes the series and character seem fresh. when Hellboy finally kicks it into gear that moment is going to be epic. Of course that may not happen here. Hellboy may simply be serving as a witness to the events, leading to a heady conversation with Professor Bruttenholm and lots and lots of reflection before being sent off to save the day again.

Mignola and Arcudi have really given each character a unique voice, even when those characters don’t say a single thing in the issue. On the flip side, this does cause a few story telling problems that left me scratching my head – what happened when Susan Xiang touched the cross? And who is that one guy again? The first question can be left to adding suspense that will be revealed later, but the second is a bit more of a problem. When there is a month between issues, asking me to remember the names of characters is a big task. Adding a editor note or cast page at the beginning of the issue would certainly help jolt my memory, and save me the work of digging through a hundred comics looking for the last issue.

Other than those nitpicks, the story is a good one. There’s just enough mystery and suspense to make me ask the all important question, “What happens next?”

Alex Maleev provides the art for this issue, and as someone who has only done one other Hellboy story, his take on the characters and setting are welcome. If you asked me if I would read a Hellboy story that wasn’t done in the Mignola style my first reaction would be, “No” but two issues in, and I’m okay without seeing squared off fingers and angular designs in every page. It still looks like a Hellboy story, as Maleev creates scenes that are very dark and contrasty. Helping with that dark look is Dave Stewart on colors. Have I mentioned how much I like Dave Stewart’s coloring? Stewart is always able to find just the right palette for the story being told, and here is is dark and brooding with just a flash of bright color (reds and oranges) when it is really needed.

BOTTOM LINE: BEST HELLBOY SERIES IN A WHILE

With just two issues released, I can’t help but think this is the best Hellboy series we’ve had in a while. A really spooky story, the murderer in the shadows, and a cliffhanger that is going to cause this newly formed team to fall apart is so much better than the gates of hell opening up consuming the Earth. Hellboy and the BPRD 1952 is a story set in the early days, and those early adventures are going to focus on what the characters don’t know and how they grow to be a major force to be reckoned with.   Hellboy and the BPRD 1952 #2 is worth the time, and is a very enjoyable read.