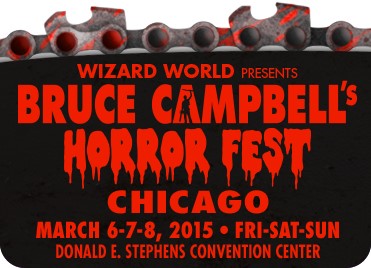 Bell will attend on Friday and Saturday; Snider and Tudyk will attend on Saturday and Sunday; the others are scheduled for all three days of the event.

In addition, all full-price Bruce Campbell’s Horror Fest attendees will receive a limited edition exclusive variant cover “The Walking Dead” comic, drawn by one of Wizard World’s talented artist guests (to be announced shortly). Comics will be issued at registration while supplies last and VIP attendees will receive an additional black & white sketch version.

Wizard World Presents Bruce Campbell’s Horror Fest is also the place for cosplay, with fans young and old showing off their best costumes throughout the event. Fans dressed as every imaginable character – and some never before dreamed – will roam the convention floor and participate in the famed Wizard World Costume Contest on Saturday night.