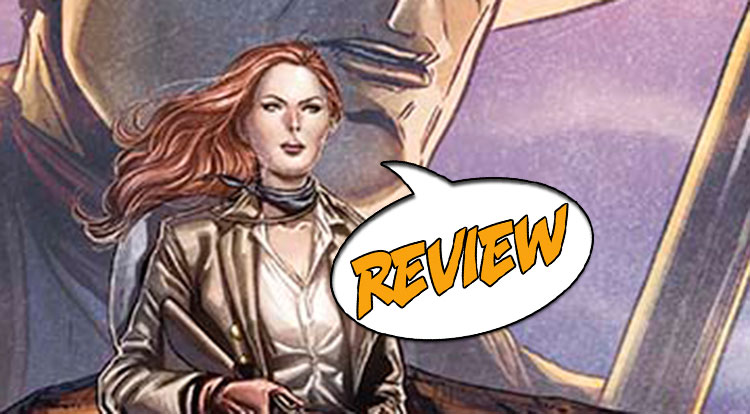 Previously in Lone Ranger: Vindicated: The citizens of Red River are frustrated that their money is constantly being stolen by a band of rogues, and hire the Lone Ranger and Tonto to help them out. Many in the town aren’t too happy to see the duo arrive, and those who are committing the crime are even less pleased. Then there is the matter of love and a sidekick who was ambushed in the streets…

THE CIRCUS IS IN TOWN

I respect that the Lone Ranger and Tonto are able to track criminals, and suss out the motives of the villain as they deliver justice to the wild west. But they aren’t detectives, and for “The Myst’ry of the Missin’ Money” these two are going to need a little help (no pun intended). Justin Gray plants the keys to solving the mystery in a way that us natural to the story, and gives us a future setting for the big show down between the Lone Ranger and the bad guys that want to rob the town of its money. I like that Gray sets up the villains as a trio with a recurring scheme, and the rogue element that screws up everyone’s plans. In a tale like the Lone Ranger, the villains need to be crazy and over the top, and Justin Gray gives us one of the craziest in the form of Westbrook.

This issue also continues the Ranger’s stumbling and fumbling with a woman he clearly has interest in. Gray isn’t afraid to point out that John is relatively unfamiliar in the ways of love and interacting with someone of the opposite sex. The Ranger doesn’t make out with women often, and we have certainly never seen him wake up on the morning after, so this exchange continues to add a bit of needed humor in a tale that is generally quite gruesome. We’ve had enough foreshadowing that something is going to ruin the relationship, and I can’t wait to see how Gray wraps this story next issue.

ART OF THE WEST

Rey Villegas captures the human form (both male and female) perfectly. Characters are not from the cookie cutter manual of comic book characters, as each has their own unique and distinct characteristics that make them stand out. Be it a giant mustache or curvy figure, or even the grungy teeth of Westbrook, there is never any confusion over who is talking on panel. Even the circus folk are unique, and the background on the fairground is filled with people whose occupations you will instantly recognize.

Adding to the feeling of the olde timey, Morgan Hickman uses colors to bring life to the region that at times can be quite dry and dusty with sparse areas of foliage. I particularly like the interior of the Mayor’s house. It’s mostly browns due to the unpainted walls, and the the clothing is also dark in nature, yet the combination of artist and color keep everything from turning into a muddy mess of brown and rust.

BOTTOM LINE: GRAB THIS ONE

The Lone Ranger: Vindicated #3 is the penultimate issue in the series, and it sets up everything the reader needs to know going into the finale. Justin Gray writes so well in this issue, that there is enough information revealed, that you may not even need to read the previous two issues (though you should). On top of that, this is some of the best art found in recent Dynamite Comics, that it is worth grabbing this week. It isn’t capes and tights, but it has everything you see in superhero comics today; the hero, his sidekick, explosions, a love interest, and a troop of baddies with a scheme to steal a lot of money. I really enjoyed this book, and think you will, too.

It isn't capes and tights, but it has everything you see in superhero comics today; the hero, his sidekick, explosions, a love interest, and a troop of baddies with a scheme to steal a lot of money.