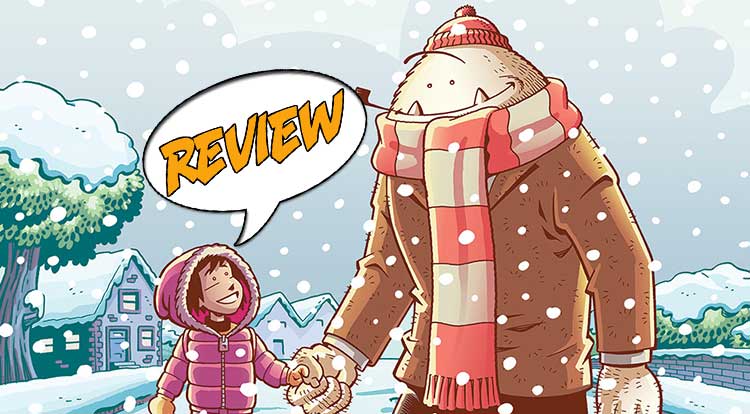 Abigail and The Snowman #1 Review

There are very few books that arrived this week, but one that we took note of instantly was KaBOOM!’s Abigail and The Snowman #1 from Roger Langridge. Previously in Abigail and The Snowman: This is the first issue of Abigail and The Snowman, so don’t expect to see a lot of information in this space. That being said, Roger Langridge has created a lot of buzz on The Muppet Show, Snarked!, and Thor: The Mighty Avenger, which means we are more than happy to give this book a look.

A “monster” turns up in a small town, meets a young child, and they become friends. We’ve seen this type of story a million times before in everything from E.T.: The Extra-Terrestrial to Hero Bear and the Kid, and now in Abigail and The Snowman. In the first issue, Abigail turns up in Shipton-on-Sea as a new student, and doesn’t make friends. Roger Langridge sets Abigail up as the “odd” girl as she shows up to her first day of school without a uniform, and has a super active imagination that turns the other kids off because she’s a “weirdo”. To make matters worse, her dad just lost his job and the two can’t do anything for her birthday. The odd-child/single parent without a job/missed my birthday are tropes we’ve seen many times before, but for a four issue series, we can’t spend an entire issue focusing on thought balloons and detailed descriptions on why Abigail is the outcast, or the frustration she has regarding her dad, so explaining Abigail’s situation in a single page works perfectly here.

Of course all of this leads to the big meet up between a girl with an active imagination and a monster who shouldn’t be able to be seen, and it is a wonderful exchange as the two argue the subtle differences between a Bigfoot and a Yeti. We eventually find out what is going on with Specimen 486, giving us the launching point to turn on the “mismatched friends on the run” element that I like very much.

There needs to be more all-ages comics out there. Abigail and The Snowman is an excellent example of what works when it comes to telling a smart story for everyone. While I look at the book from the viewpoint of an adult, and appreciate what the father figure is going through, the young boys in the house can get on board the pure fantasy element and fun the seeps through every page in this book. Yes, the story points are instantly recognizable, but it is how the author uses them to move the story along effectively that works here.

DOING IT ALL YOURSELF (KINDA)

I have to give a huge tip of the hat to Mr. Langridge. Not only does he tackle writing the series, but he is also the illustrator and inker. I enjoy Langridge’s style a great deal. It has an energy in it that screams, “PAY MORE ATTENTION TO THIS GUY!” Though the characters are portrayed in a simple cartoony style, Langridge fills the page with detail. In my first skim through, the issue evoked memories of Calvin and Hobbes, without directly imitating the style. It conveys fond memories and creates a happy feeling knowing seeing the expressions on the characters faces and the feeling of life in each panel.

One thing that I complain a great deal about when it comes to art is how artists suddenly shift from detailed panel to medium or close-up against a blank background. That does happen a few times in this issue, but fortunately, colorist Fred Stresing uses the color palette to give us something more. When Abigail is in class and having a rough time, the background is a dark pink, the next panel shifts to red when she gets hit in the head by a wad of paper, and then shifts back to dark pink as she reacts. Stresing does this a few more times in the issue, and I like it a lot. If only more colorists and artists could do this, it would lessen my hate for the one color background.

BOTTOM LINE: PICK IT UP IF YOU LOVE FUN

I knew going in to Abigail and The Snowman that I was going to get story using fairly familiar situations, but I wasn’t prepared to enjoy it as much as I did – and it is all Roger Langridge’s fault. The creator continues to impress me with his work that brings the fun and imagination back to comics and that is something we haven’t seen in a while. The art is fresh and every panel has a life to it. Kids and adults alike will enjoy this book, and if you are looking for a way to kick of 2015 on an up note, Abigail and The Snowman #1 from KaBOOM! is really great way to do it.

ABIGAIL AND THE SNOWMAN #1

Pick it up if you love fun!

It’s like E.T. met Calvin and Hobbes and had a baby. Fun and imaginative, this is the book you want to read to start 2015 off right!