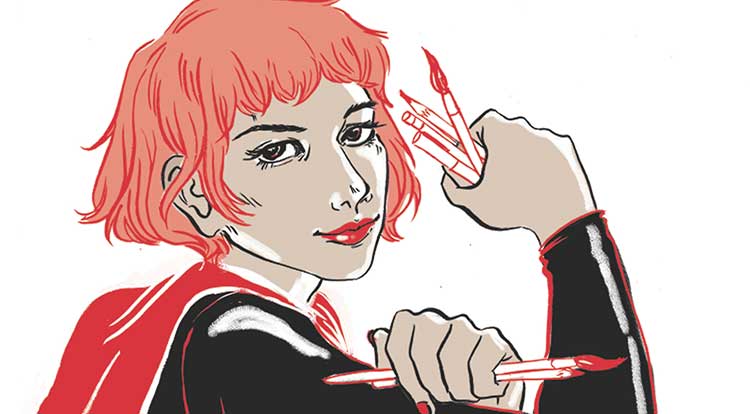 SHE MAKES COMICS is Out on DVD!

Sequart Organization and Respect! Films are proud to announce the DVD release of their latest documentary, She Makes Comics, a film spanning the history of women in comics as creators, fans, and everything in between.

She Makes Comics tells the little-known story of women in comics, highlighting the contributions they have made to the medium since the turn of the 20th century. It features interviews with such prominent figures as historian Trina Robbins, underground comics creator Joyce Farmer, former DC Comics publisher Jenette Kahn, DC / Vertigo founder Karen Berger, Elfquest creator Wendi Pini, Captain Marvel writer Kelly Sue DeConnick, and dozens of others.

The documentary is available to order on DVD and as a digital download at SheMakesComics.com. Here’s what the critics are already saying:

“Entertaining, informative, and inspiring. Plant[s]a flag in the ground to let everyone know that things are, thankfully, changing. The real success of the film is not simply describing or complaining about the problem, but addressing it head on and reinforcing the dedication with which they view comics; that comics are worth fighting this battle for. Drips with passion for the comic book medium and for the fight against the sad realities that have plagued women in the industry for decades.” — Cliff Wheatley, IGN

“I can’t stress enough how important it is that you see this film, and more than that, that you take its message with you after the credits roll. She Makes Comics lets any woman watching know that she too is accepted, that she is welcome here. A moving, poignant film that reveals a hidden history of comics… 10/10.” — Timothy Merritt, Coming Up Comics

“An uplifting and informative celebration of women in comics.” — Hugh Armitage, Digital Spy

“I was so inspired and impressed by all of those amazing women.” — Shona O’Flaherty, Is It A Bicycle?

The film is directed by Marisa Stotter and produced by Patrick Meaney and Jordan Rennert of Respect! Films. It is executive produced by Sequart’s Julian Darius and Mike Phillips and Columbia University comics librarian Karen Green.