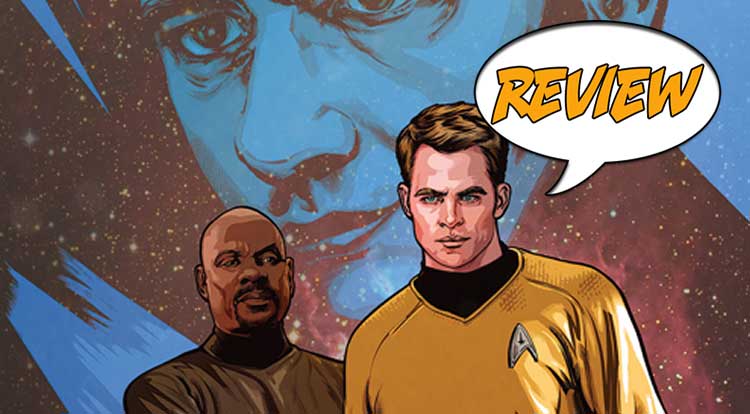 Before you read the rest of my review of Star Trek Ongoing #39, it’s important that you know that I’ve been a fan of Star Trek for many years. I’ve loved its ability to explore human nature and tell science-fiction stories like few other franchises have been able to do.

However, even more than that, I’m a Niner, which means I love Star Trek: Deep Space Nine the most of all the show’s incarnations. “Classic” or “Original” Trek falls in place right behind DS9.

With a new series of movies as well as comics from IDW Publishing based on the films, I had been hoping for something I hadn’t seen before. That’s why the latest Trek film was something of a disappointment to me. They’ve re-told Trek tales, and not always done in a way that intrigued me. For example, when the comic revisited “Where No Man Has Gone Before,” Spock was able to nerve-pinch a god-like friend of Kirk’s to save the day. What??? I found that hard to take.

Recently, I came across a new six-part storyline that’ll is nearly complete as of this Wednesday in your local comics shops. It’s called “The Q Gambit,” and it features the challenging and nearly omnipotent alien portrayed in Star Trek: The Next Generation, DS9 and Voyager by John de Lancie.

Imagine my surprise and my delight to see, at the end of the first chapter (issue #35), Terok Nor, the station that would later be renamed Deep Space Nine.

Previously in STAR TREK ONGOING: “It’s the penultimate chapter of the ‘The Q Gambit!’ Captains Kirk and Sisko must work together to fight back against the forces of the Dominion! Meanwhile, Spock attempts to free the Enterprise and her crew from the clutches of the nefarious Dukat! And just what is Q planning for everyone involved? The fate of the galaxy hangs in the balance in this all-new story produced in association with Star Trek writer/producer Roberto Orci!”

When I found out that it was Q encountering the Enterprise, I figured that the new crew would meet the folks from The Next Generation.

Turns out Q has discovered that the multiple timelines exist, and he’s taking on the new Captain Kirk and his Enterprise by sending them to a possible future to meet Benjamin Sisko and his “Federation” of rebels out to free what’s left of humanity from Klingon domination.

Five installments in, we’ve seen several DS9 “regulars,” including the aforementioned Sisko, Kira, Quark, Doctor Bashir and Worf along with his brother Kurn. We even see theDefiant again, my very favorite Trek starship! It’s like a family reunion for me!

Of course, with this being an alternate timeline, anything can really happen just as it did in the Mirror Universe on Deep Space Nine. The Ferengi were dropping like flies there, you may recall!

We’re into issue #39, and the Enterprise crew has been divided into two groups, both meeting DS9 characters.

Mike Johnson’s story pacing is quick, and his scripting is keeping me on the edge of my seat. After all, I haven’t been here before! I want to know what’s going to happen next!

I really have to give the artists a lot of credit in getting the likenesses down so well, and that includes everyone from the new movies to Next Gen to DS9. That’s always a challenge for Trek artists, and Shasteen and company really deliver!

BOTTOM LINE: Where No Trek Has Gone Before

Let’s be real – with literally decades of stories under its franchise belt, Star Trek has been struggling to come up with something at least different. (I’m always unhappy when the novels return to planets the shows and movies have already been to. If there was a good reason to go back there, I’m sure Trek would have done that on the big or small screens.)

With this event, Johnson and company have treated us to something we haven’t yet encountered – the crew of DS9 in a universe where the bad guys have won and the new movie characters. And not all of Sisko’s team survives, either!

I’ve been on the edge of my seat with each issue, which is a big change from the first ten or so I read, then abandoned the series.

If you want to see Trek that you haven’t read previously, I encourage you to pick up this event. It’s been such a pleasure to go “where no Trek has gone before,” if you’ll pardon the expression!

If you can’t find copies of previous issues, I encourage you to download digital copies to get on board before the big finale hits next month!