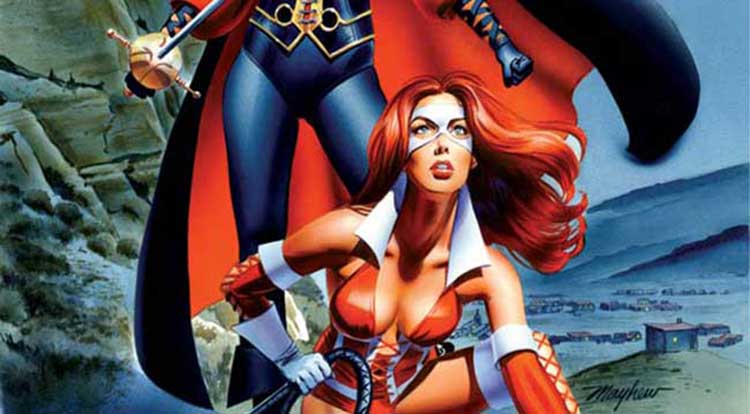 In Lady Rawhide / Lady Zorro #1, the two female vigilantes must live up to the legend of Zorro after the inspirational hero is murdered! When brutal slavers descend upon a village and steal away all its adolescent girls, Lady Zorro and Lady Rawhide – who would sooner ride alone than ride together – must put aside their ideological and methodical differences to free the missing girls from a fate worse than death.

Writer Shannon Eric Denton says, “Women were a huge part in the settlement of the Old West but are often overlooked in the historical context. With characters like Lady Rawhide and Lady Zorro, they don’t let you overlook them. They’re two powerful characters with equally powerful personalities that tamed what is now Southern California. As a current Los Angeleno, I couldn’t be happier to contribute to their mythology and the mythology of this part of California.”

Lady Rawhide (along with her alter-ego Anita Santiago) was introduced into the Zorro mythos by writer Don McGregor and artist Mike Mayhew in 1994, a masked vigilante skilled with swords, guns, and her signature bullwhip. Driven to avenge her brother’s suffering at the hands of a crooked government, she first had an antagonistic relationship with Zorro, but eventually became his confidante and staunch ally. Lady Rawhide’s popularity as a Zorro regular grew, leading to her headlining several Lady Rawhide comic series.

Lady Zorro is a more recent addition to the Zorro mythos, created in 2012 as a strong supporting cast member of the Zorro Rides Again series by Matt Wagner and John K Snyder III. Seeking vengeance after her husband was murdered by corrupt government officials, Lady Zorro cut a bloody swath across the countryside until the elder swordfighter calmed her rage. The character appeared in a successful 2014 self-titled series by Alex De Campi and Rey Villegas.

The violent origins of the fictional heroines very much reflects the history of the region, which will be incorporated into the new series. Denton says, “There was so much hardship and adventure in the Old West, even when you aren’t dealing with heroes like Lady Zorro and Lady Rawhide, so adding them to the mix really sets the stage for truly captivating story. I’m trying to tell a good story first, and trying to be as true to the history of the period as I can without being beholden to it.”

Regarding his contribution to the overall Zorro mythos, Denton says, “I’m honored and thrilled. Outside of growing up loving the comics and TV shows, my life has intersected with the character several times. I’ve lived in places where they filmed Zorro like Cerrillos, NM, and my current home in Los Angeles. I currently live near frequent movie site Vasquez Rocks, which is named after notorious bandit Tiburcio Vasquez, the inspiration for Don Diego de la Vega (Zorro). Zorro roamed what is now Los Angeles, so I’m surrounded by his mythology all the time. Being able to contribute to characters within Zorro’s mythology, like Lady Rawhide and Lady Zorro, is incredibly rewarding!”

“The folks here at Dynamite love two-fisted, gun-blazing, whip-cracking action, and that’s exactly what Lady Rawhide / Lady Zorro delivers,” says Nick Barrucci, CEO and Publisher. “With his flair for pulp action, Shannon is a perfect choice to take up the reins on the new miniseries. And there’s no one better suited for bringing these two pistoleras together than Rey Villegas, whose supreme skill brought both characters to life in their respective solo series. Buckle up, comic fans – it’s going to be a wild ride!”