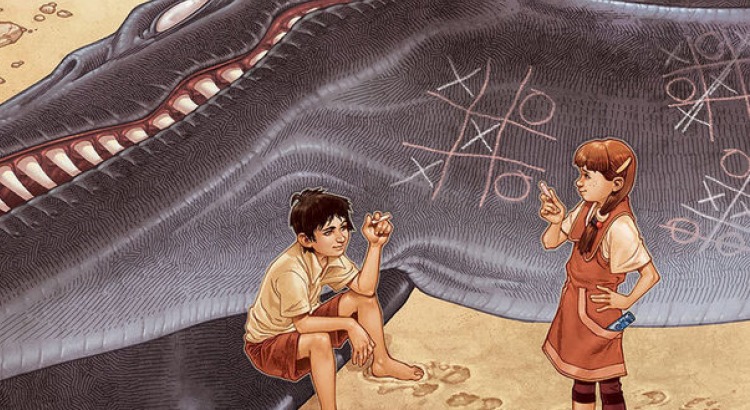 It’s a celebration of the writings of Ray Bradbury and first up is Joe Hill’s By the Silver Water of Lake Champlain. What lives in Lake Champlain? How will it change the lives of friends Gail and Joel? Here, have a review! Previously in Shadow Show: Nothing! New series! Though, for this issue, it helps if you’ve read Joe Hill’s short story By the Silver Water of Lake Champlain.

BY THE SILVER WATER OF LAKE FEELS

This issue of Shadow Show is focused on the story of Gail and Joel, two children living with their families along Lake Champlain. One day, after being sent out to play by mother, Gail finds her friend Joel atop the carcass of a deceased Plesiosaur—which they name the Gailosaurus. The two contemplate what they’re going to do with all the money and fame their going to get from finding the dinosaur. In order to assert their claim on the carcass, Joel carves their names into it. As Gail goes to get her father to show him the find, the dinosaur’s mate returns. Years later, Gail contemplates what happens on the water of Lake Champlain and contemplates all that could have been.

While not one hundred percent following Joe Hill’s short story, it is still a very good adaptation of the original, and rightly so since this isn’t the first time Jason Ciaramella has adapted one of Hill’s stories, having previously taken the reins with The Cape. It doesn’t quite have the oomph that the short story did but, then again, Ciaramella is working within the constraints of having a page limit and does still manage to maintain that sense of awe and childlike wonder that the original did. However, the comic would have been much more powerful if they nixed the bits about present-day Gail and instead kept to Gail’s memories of childhood, thereby allowing for more substance from the original story. Not much, but a little.

Despite all that, the book is a really wonderful ode to Bradbury in comic form. Bradbury—himself an avid comic fan—had a lovely on scifi and this comic keeps with that tradition, putting something fantastical into what could potentially be an everyday boring setting. The focus on the children is particularly striking as children are notoriously unreliable narrators. This story could well have happened in Gail’s mind as easily as it could have happened right before her eyes. It’s very much in tune with Bradbury’s short stories, in particular his collection of short stories in the Illustrated Man.

It’s also important to note that this is considerably “lighter” than some of Joe Hill’s other works, like Locke & Key. While it’s not completely all sunshine and rainbows, it’s also not as dark as some of his other works.

Charles Paul Wilson III and Jeremy Mohler take point on art for this issue and manage to capture the innocence of the story itself. The artwork feels a little like old school newspaper comics in their cartoon-esque overly rounded heads and over-indulgent lining. The coloring is carried out in watercolor style, which fits the nature of the story itself—water being the ever-present force in the background. The innocence of the story is fully embodied during Gail and Joel’s wonderings about what they’ll do with their fame and fortune, the two children providing the frame for each panel depicting a different desire—painting in New York, discovering other archaeological finds, living in Paris, buying a motorcycle, and so on and so forth.

One has to really credit the authors for their choices during the final few panels. When the monster emerges from the mists, it could have really been carried out in a gory and over-the-top fashion, but they instead chose to play it out much in the same way it did in the short story, even clearing up some the confusion one may have had while reading the short story itself. In fact, the artists instead used panels that first focused on Joel and then on Gail, using her facial expressions to give the reader all they needed to know about what just transpired, only switching back to Joel once the event had transpired. It was a really classy and tactful way of showing what happened without actually showing what happened.

Despite it not being a completely true, one hundred percent adaptation of Joe Hill’s original story, Jason Ciaramella has stayed as true as he can to the original, allowing not only Hill’s work but his own to act as an opening ode to Ray Bradbury. Wilson and Mohler also give the reader a child-like insight into the story, much as the story itself did via narration. While there are some things that could have been cut, this is a good first entry into a series that acts as a love-story to Ray Bradbury’s work. It’s a must get if one is a Bradbury or Hill fan.