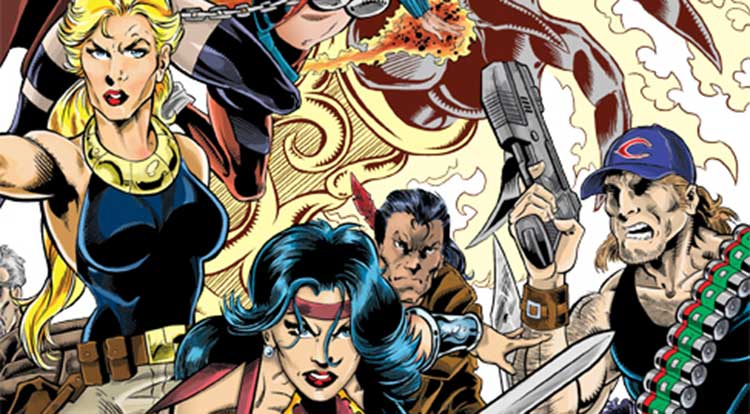 StormQuest creators come together at Cavalcade of Comics Convention

On Saturday November, 22nd, 2014 Bill Nichols, Willie Peppers and Robert W. Hickey part of the creative team from the STORMQUEST Graphic Novel and SKYSTORM ORIGINS #1 will be together for the final time this year.

The 1st annual Cavalcade of Comics Convention in Louisville, KY offers the creators a chance to unite and display the collected volume of STORMQUEST. “The STORMQUEST Graphic Novel is the starting point for the SkyStorm Universe.” replied Robert W. Hickey, “From this story everything changes for our characters and we get to show the readers within the pages of SKYSTORM ORIGINS which ships March, 2015 exactly what changes and what’s on the horizon.” finished Robert.

But you don’t have to wait until 2015 to see the artwork and see what SkyStorm and its publisher Afterburn has coming out to stores. Bill, Willie and Robert will have pages from the SKYSTORM ORIGINS #1 story on display along with a few copies of STORMQUEST Graphic Novels Kickstarter volume for sale.

Don’t miss this great opportunity to get in on the ground floor. About AFTERBURN:
With over 25+ years of manufacturing and publishing history, Robert W. Hickey, along with his brother Mike and co-creator Bill Nichols, has started AFTERBURN, a publishing arm that offers comics books, graphic novels and special items to stores in print and digital formats.

Robert is the co-founder of Blue Line Art, the original manufacturer of professional comic book art boards. Blue Line has supplied thousands of artists over the years with quality art boards and supplies. Blue Line was the first to package and offer art boards to retail outlets with over 40 different products that support comic creators.
Creating Sketch Magazine Robert along with Bill Nichols as the current senior editor, offering comic creators their own magazine to learn and share tips and creative techniques of the industry.

The founding force for his SkyStorm Studio where Robert has created comics for over 25 years. Within that time he has created top-selling comic for distribution into mainstream outlets such as Wal-Mart, Toys R Us and comic shops around the world.