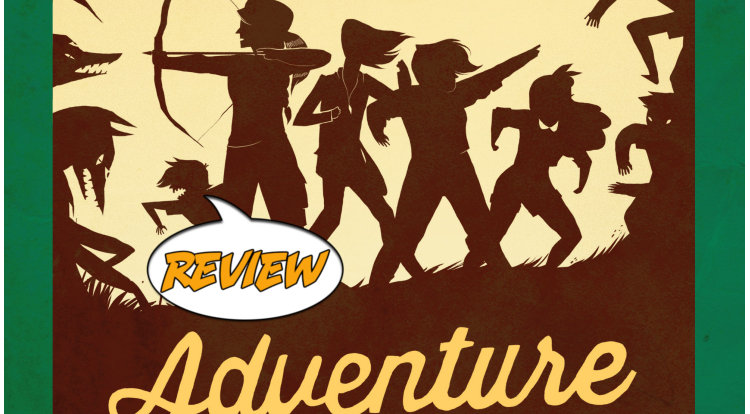 Lumberjanes #8 is the final issue in the first arch of this series and brings to the forefront the girls motto: friendship to the max.

Lumberjanes #8 is the final issue in Noelle Stevenson and Grace Ellis’ original run and the pair has done something quite rare in having no weak issues in the entire story arch. Lumberjanes #8 ends just as strongly as the series began with each of the girls having a moment to shine on their own and make a significant move in the narrative that plays to their respective strengths.

This issue picks up exactly where Lumberjanes #7 left off. Jo is lost in a shadowy world that her – frankly – conniving older sister has sent her off to. She’s trapped completely with no course of action, save to call out for her friends and hope for rescue. In a different issue in a different world Jo would have been scooped up and carried away by a man, but Lumberjanes #8 is not that and back in the present day version of the world April leads the charge against Diane to save her very best friend.

Diane – yes, like Artemis – however, has something else in mind and seemingly abuses the Lumberjanes’ counselor Jen into divining the location of a power source from a star map. Just as Diane reveals that she, cannot, in fact, change her sister Jo back into a normal human being her twin brother – Jo’s older brother – Apollo appears with his boy scouts and thus begins the epic battle that will continue on through the end of Lumberjanes #8.

Jen, Mal, April and Ripley fight off an army of their male peers as Molly divines magical anagrams cast on the ceiling – a skill that readers familiar with the ongoing series will remember from a previous issue. What can be surmised from the messages in Lumberjanes #8 is that friends must stand strong.

At this point in Lumberjanes #8, Stevenson and Ellis’ planning comes to the light. The expression, lessons and running theme of “Friendship to the max!” has run with great strength throughout the entire series. Certainly, Lumberjanes is sweet, whimsical and campy at different points throughout the series and even through the penned moments of silliness it never strays from feeling incredibly sincere. The ending that the writers have presented in Lumberjanes #8 is not particularly earth shattering and probably won’t change your life as reader experiencing it, yet it serves each character in turn and their overall narrative as a team.

It has officially been confirmed by the creative team via Twitter that Lumberjanes will be returning to print and that Lumberjanes #8 is not the end of the adventures of Jo, April, Ripley, Molly and Mal and I look forward to seeing these girls grow older and change and perhaps have to be reminded of the lesson that this series has worked so hard and so diligently to teach them.

As with the quality of the writing team, artist Brooke Allen delivers a product that remains on par with the rest of her work throughout the series in Lumberjanes #8. The themes tackled throughout this issue and the scale in which they are told on are the largest we’ve yet seen for the girls and Allen shines in several moments.

The great power source that Apollo and Diane are racing toward winds up in the hands of Ripley and the least emotionally stable character in Lumberjanes #8 suddenly has the greatest power in their known universe at her fingertips. Across several panels artist Brooke Allen does nothing short of present Ripley as a goddess. Ripley has been the scruffiest and least feminine character throughout Lumberjanes and Allen draws her with such striking beauty that I found myself just looking at her for several seconds.

Allen moves the fights scenes throughout Lumberjanes #8 along at a quick clip. When I started reading the series I wasn’t in love with Allen’s Adventure Time-inspired cartoon-y style and I was wrong. The battle between the Lumberjanes, the boys and the wicked twins features many, many elongated limbs and physics-defying movies and it’s just stunning to behold.

Lumberjanes #8 has some sweet intimate moments between characters (one I won’t go into much detail about happens between Mal and Molly comes to mind …), and Allen is seamlessly able to highlight them by taking a step away from the overall chaos present in the issue. She intelligently selects the most important moments for readers to see and is instrumental in the breakneck pace Lumberjanes #8 and other issues in the series read at.

Lumberjanes #8 is a great finish to a great series. It satisfies from a narrative and character perspective, it’s lovely to look at and just fun as all get out. This is an awesome issue!

A very fun capper to a great series that featurs: smooches, fastball specials and cameos by figures from Greek mythology.