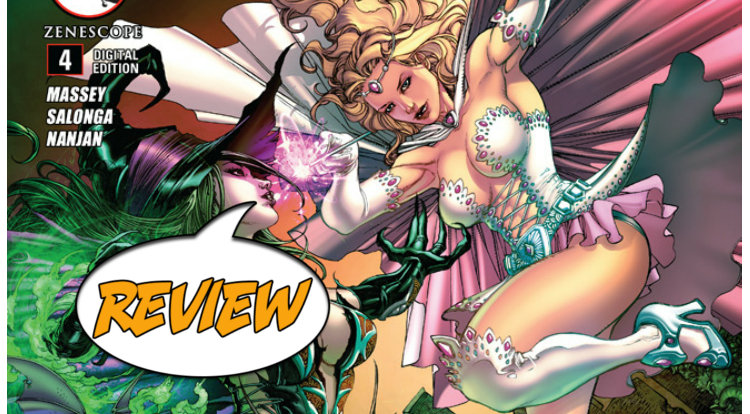 Tales from Oz #4 features Glinda and Smynth trying to help Zamora escape the corruption growing from within her pregnant belly. Previously in Tales from Oz #3: The Witches of Oz rule with power and fear. Even their allies are not safe from their wrath if they step out of line and the punishment for those who betray them is severe. And as one oftheir most trusted advisors is about to find out forgiveness is not in their nature.

A confession right up front: Tales from Oz #4 is my first Zenescope comic. This was the title that I’d always heard lauded as being the best in their paddock and it turns out that this reputation really was earned. Tales from Oz #4 is being marketed as a great jumping on point and that is mostly true. Jeff Massey has enough of the familiar from the Wizard of Oz married with enough original storytelling to keep readers interested.

Side note: if you are familiar with Wicked (either the book or the Broadway musical), and invested in the Wicked Witch of the West being named “Elphaba”, then having the same character be called “Zamora” in Tales from Oz #4 will throw you for a bit of a loop … it certainly did me.

When you distill the narrative down, Tales from Oz #4 is the birth of the Wicked Witch of the West. It has become a classic trope in Wizard of Oz pastiche, but that doesn’t make this issue any less fun. In Massey’s tale, Zamora – already green – is heavily pregnant with twins conceived of an evil entity. Her behaviour is erratic and the birth of her children not only heralds a permanent magical shift in Zamora’s life, but simultaneously heralds a deep, dark evil coming into Oz unlike anything it has ever encountered before.

Glinda – we all know her – sets out with a character named Smynth to unearth some magical aid for Zamora. One of the weaknesses of Massey’s writing in Tales from Oz #4 is that he doesn’t take the time to explain to new readers who Smynth is in relation to the familiar characters beyond a cursory mention of his relation to Zamora’s husband. Early in the issue Zamora curses both Smynth and Glinda, altering their appearance for the remainder of the issue, but beyond that it is difficult to ferret out what service or aid he offers to Glinda as a travel companion.

Beyond dealing with their shifting appearances – and Glinda’s is certainly a step toward the cheesecake – the pair spend the rest of Tales from Oz #4 tracking down Doctor Grafft. Doctor Grafft is a former teacher who is known to dabble in the more eclectic magical arts. In the end he is ultimately helpful, though in the final panels it’s tough to tell how successful Glinda and Smynth will wind up being.

Jeff Massey has put a fun story on the page set against a familiar world from everybody’s childhood and Tales from Oz #4 is a better comic book than I had anticipated.

Artist Noah Salonga has done a lot of beautiful work in Tales from Oz #4. Yes, this is a Zenescope comic and that comes with aesthetic implications, but Salonga excels in this arena and you almost don’t notice it as a reader with the in-canon explanation given.

The character design that struck me as the most beautifully crafted was Smynth. Early on in Tales from Oz #4 Zamora transforms her brother-in-law into a rat and what Salonga puts on the page belongs on the cover of the Redwall series of novels. Even anthropomorphized the character’s intelligence shines through. There is also a gorgon who appears in the latter half of the issue and she is even more striking that the scantily clad Glinda.

My hope for coming issues is that Salonga is able to pay in the magical world of Zenescope’s Oz and is less mired in keeping Glinda at the front of every panel, but that doesn’t seem likely to happen.

THE BOTTOM LINE: WHY NOT JUMP ON

If you like the Wizard of Oz or Wicked or Tin Man or any other pastiche set in L. Frank Baum’s world then Tales from Oz #4 will be a fun read for you. Definitely for a more mature audience, but whimsical nonetheless.

Tales from Oz #4 teaches readers how this world birthed The Wicked Witch of the West in a surprisingly entertaining issue!