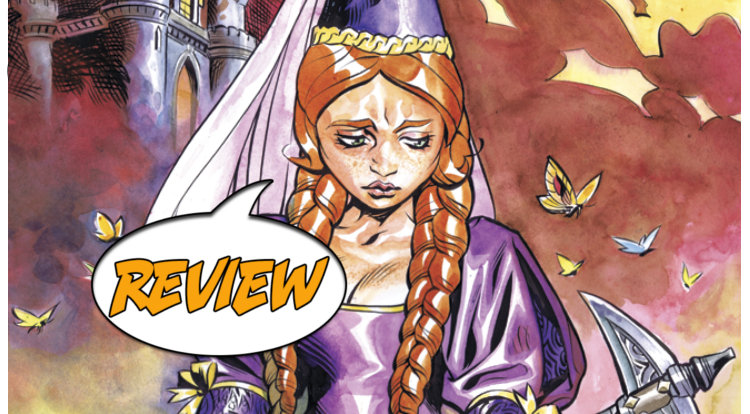 Princess Ugg #5 does away with any character development Julifer has undergone up to this point in the run and has Princess Ulga learn a lesson about boys. Previously in Princess Ugg #4: Ulga helped Julifer in the school’s riding competition and Julifer helped Ulga with her loot. Friendship seemed on the horizon. Meanwhile, in Grimmeria, dark happenings are underway.

WHEN WILL PRINCESS UGG LEARN

I have really, really been enjoying Ted Naifeh’s work on Princess Ugg so far and I was expecting Princess Ugg #5 to keep building on the themes of acceptance, friendship and individuality that the run has been dealing with thus far. However, Ulga’s roommate-cum-nemesis Julifer – whom Ulga inexplicably and repeatedly seeks the friendship of – is just as rude and cold to our protagonist as she was in issue one. At this point in the narrative we should be seeing some major growth from Julifer the way Ulga has undergone obvious shifts in perspective, not dealing with these high school clichés that feel ever-so-slightly out of place in Princess Ugg #5’s fantasy setting.

To the issue itself: Princess Ugg #5 opens with Ulga and her classmates sneaking out of the school to abscond into the night via their horse drawn carriages. They go to meet up with some local soldiers in a pub and when Ulga makes an advance on the Captain of the Guard Julifer gets even more worked up and snarky than readers are used to seeing. As with everything else about her, Ulga’s rough behaviour earns her derision from her fellow girls and the accidental admiration of the soldiers.

Meanwhile, in Grimmeria, Ulga’s father keeps counsel with his raven. The events of Princess Ugg #5 don’t confirm much more about what is happening over in the barbarian kingdom of this world and although we only get the barest of peeks into this secondary storyline it is by far and away the most compelling part of the issue’s narrative.

The next day, the ladies of Princess Ugg #5 dress up – Princess Ulga included – and set off to meet Queen Astoria escourted by the same contingent Ulga and readers alike will recognize from the previous night’s transgression. That night when the groups make camp Ulga seeks to right a wrong that isn’t really a wrong. Despite Julifer’s best effort to impress upon her roommate that she deserves nothing short of exile and shame Ulga goes to the Captain’s tent … just in time to discover the aforementioned terrible roommate in the bed of the Captain.

Princess Ugg #5 picks up the next, next day when the convoy continues Queen-ward. Ulga threatens to out Julifer’s less-than-ladylike behaviour and rather than appealing to Ulga’s kindness, apologizing or even groveling writer Naifeh has Julifer degrade Ulga further. She makes it clear that if Ulga reveals Julifer’s after dark activities she will either be regarded by her peers as a liar or a tattle tale and both are even less desirable titles than her current status as: outcast.

The only real redeeming quality Naifeh manages to bring to Princess Ugg #5 is a bandit attack that requires Ulga to woman up and pull out a weapon. It’s pretty disappointing because this had been a great series until this issue.

Writer Ted Naifeh is also on art duties for Princess Ugg #5 and that’s probably the best thing about the entire issue. His water colours are consistently stunning and add a whimsical, fairytale quality that does nothing but enhance the story being told.

That being said, there are some things in Princess Ugg #5 that are less than lovely on the art front. For the second time in the series Naifeh has an oddly cheesecake-y scene with Julifer almost naked in the Captain of the Guard’s bed. It was an unnecessary move in the thrust of the overall narrative and seeing her nudity feels out of place in a comic series that, otherwise, is very much all-ages.

Second, Naifeh usually does a great job at having Ulga appear physically strong on the page. She has muscles and tone and the artists also does a good job at balancing that against her inherent femininity. That in mind, in Princess Ugg #5 we see Ulga lying in her bed with her arms behind her head confidently waiting to dangle shame over Julifer and she looks like a man with braids. Much like Julifer’s nudity it, this panel toward the latter half of the issue just doesn’t look right.

The art in Princess Ugg #5 is very good, but like the writing this issue has some missteps.

THE BOTTOM LINE: A MISS IN A SERIES OF HITS

Princess Ugg #5 is an unfortunate miss in an otherwise excellent series. If you’ve been reading along than pick up this issue and hope, like myself, that this is a rare misstep for Ted Naifeh, not signifying the downfall of an entire series.

Princess Ugg #5 hits on a troubling number of tropes for a story about adolescent girls including the fact that Princess Ulga is blind to the fact that she has a cruel roommate in Julifer who, in spite of everything, will never accept or come to like her.