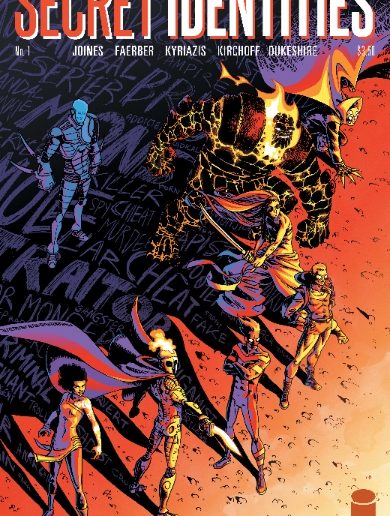 In SECRET IDENTITIES #1, the supergroup known as The Front Line has just invited the new hero Crosswind to join them. But what they don’t know is that Crosswind is a mole, sent to learn all their secrets. And the Front Line has LOTS of secrets…

“Brian and I have been friends for a long time, and one of our common interests is super-heroes,” said Faerber. “So it only made sense that our first writing collaboration would be on a project like this. And Ilias’ art is explodes off the page, mixing a classic super-hero style with an alternative sensibility.”

“It’s great to be dipping my toe into super-hero waters,” added Joines. “And to be doing it with someone with a track record like Jay is a true thrill. On top of that, watching Ilias bring these characters, some of whom have been warming the bench in my head for a very long time, to life with such vibrant style and energy… absolutely amazing.”

While issue #1 introduces Crosswind as a traitor, what readers won’t know is what form his betrayal will take. When will he turn on the team? How will he do it? While he bides his time gaining their trust, he must also learn to act like a hero. Is there a chance that acting like a hero will actually turn him into one?