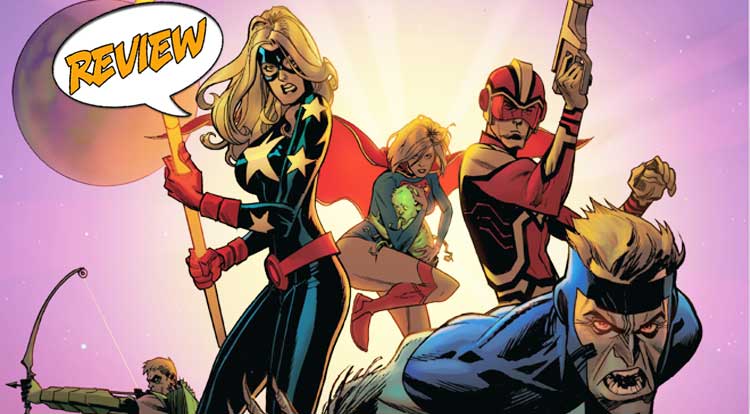 The Legion Of Super-Heroes has arrived in the present from the 31st Century, with a grave mission: Stop the greatest menace their time has ever known.  Unfortunately, that may mean killing an innocent child…

…assuming they can get past the child’s JLU protectors.  Your Major Spoilers review of Justice League United #6 awaits! Previously in Justice League United:  In the wake of a massive interdimensional war (known to us as “Forever Evil”), several former Justice Leaguers bumped into one another and stumbled across a conspiracy to create an alien hybrid creature that will one day destroy the universe.  Thankfully, the madman behind it ISN’T actually space-warping hero Adam Strange, but a Thanagarian shape-shifter named Byth.  The Martian Manhunter, Green Arrow, Hawkman, Supergirl, Stargirl, Animal Man, the real Adam Strange and new young hero Equinox have joined forces to keep that from happening.  After Hawkman’s murder led the team to split up, Martian Manhunter’s squad was stunned to be confronted by a man in a cape, a representative of something called the Legion of Super-Heroes, who insists that Ultra must die.  The two teams came to terms on NOT murdering the tiny alien boy, but things have been complicated by the arrival of a third faction, The Cadre, a group of mercenaries who aren’t as likely to be talked out of their murderous urges.

Having been very frustrated by the Legion’s appearances in the New 52 to date, I was pretty happy to hear that Jeff Lemire would be bringing them back in this title, but I wasn’t sure about the premise (the old “travel back to kill Hitler in his crib” routine) was going to make me happy.  JLU Annual #1 surprised me, with some lovely character work and a respectful take on the heroes of the future, leading to this issue, wherein the combined Legion and League take on The Cadre.  Most of this issue is fighty-fighty, with Mon-El and the Martian Manhunter leading the charge against the (much more powerful than they were in 1984) villains, with Hawkman mind-controlled into battling Green Arrow and with new hero Equinox forced to face off with alien crazy-pants shapeshifter Byth for Ultra’s life.  It’s very much a middle chapter, without much plot momentum, but some interpersonal bits that are satsifying (Animal Man/Stargirl and Equinox/Ultra are particularly good), and the issue ends with a question that’s been hanging since the middle of 2012: What in the world happened to Wildfire and the rest of the ‘Legion Lost’?

There’s a lot of clever lore at the bottom of this story, but I get the feeling that Lemire (like myself) really wants to put everything together in terms of the Legion, as their very important to the DCU.  Fortunately, he’s also got a pretty cool story behind it all to work with, and a lovely art team that makes the issue look really good, despite using some of the unattractive Gary Frank LSH designs.  Most importantly, the characters of the Justice League are at the center of this galaxy-spanning madness, making it clear whose book we’re reading, even with 10 villains and more than a dozen guest-heroes in play.  I find Supergirl and Green Arrow to be a little bit flat this issue, but that’s likely more a matter of space than one of pacing, and the issue ends at a satisfying point in the story for me, serving both as cliffhanger and quiet “Hell, YEAH” moment.

The big takeaway from this issue is the Legion Lost returning, but there is still the unanswered question in the background of what to do if they can’t keep Ultra from becoming the evil Infinitus and destroying the 31st Century.  Can the Legionnaires murder a kid in cold blood?  Should the Justice League allow it?  It’s a question of destiny and blah blah blah predetermination-cakes, and one that probably won’t have a satisfying resolution either way, but at least it’s something we haven’t fun into a million times before in comics.  All in all, Justice League United #6 does the trick, with lovely visuals a compelling story and strong enough plotting that the dozens of characters don’t totally overwhelm it, even if things do bog down a bit, earning 3 out of 5 stars overall.

Not a lot happens this time, but some unanswered New 52 questions finally get resolved...