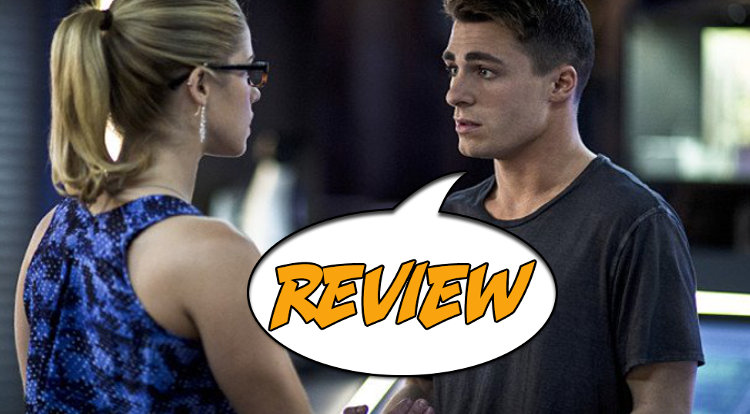 Arrow season 3 episode 6 features Ted Grant being framed by an outside source. Ollie isn’t sure he can be trusted and Laurel is dead set on protecting her trainer. Roy thinks he is responsible for Sara’s death. Previously on Arrow: Viewers get a lot of details revealed about Felicity (Emily Bett Rickard)’s past that they didn’t need and ultimately led to a weak episode. Brother Eye made a brief appearance.

Arrow season 3 episode 6 is very Laurel (Katie Cassidy), heavy, much to the episode’s detriment. She has become a character much like Clara Oswald became in the most recent series of Doctor Who – we spend a lot of time in Arrow being told how important, talented and smart Laurel is and she never ever proves it. Guilty is much the same.

The crux of Guilty is Ted Grant – who also happens to be Laurel’s personal trainer – is being set up. A trail of bodies are being littered across Starling City all with direct connections back to Grant. He starts out the episode spending a lot of time with Laurel working on her boxing technique. These beginning scenes might have been more compelling – or even mildly entertaining – if Katie Cassidy could throw a punch. For the most part she comes across as petulant whilst J.R. Ramirez struggles to keep afloat.

Both Captain Lance (Paul Blackthorne), and Oliver Queen (Stephen Amell), are ready to throw in the towel where the investigation on Grant is concerned and, in scenes placed too close together, both caution Laurel against spending any more time with Grant than is absolutely necessary. In an outburst that I could barely have rivaled as a teenager, she shuts the two characters who care most about her in the world down.

The increasingly reckless behaviour that Laurel has displayed in Arrow – and in the episode Guilty in particular – raises some troubling questions about, unfortunately, the leading female character of the series. In past seasons of Arrow we’ve seen Laurel become addicted to alcohol and drugs in quick succession, thereby establishing an acknowledged pattern of addictive behaviour. I believe the intent of writers Erik Oleson and Keto Shimizu and the showrunners to show that Laurel is brave, strong and bold (qualities that we recognize and even like in Oliver/the Arrow). However, it does make me wonder: is Laurel addicted to danger? Is she addicted to adrenaline? Is she addicted to either the illusion of power or the physical beatings that she has suffered each time she has played her hands at vigilantism in past episodes?

Arrow season 3 episode 6 Guilty is about Laurel and Oleson and Shimizu have effectively hamstrung any strength that she might have had. This, coupled with the fact that Cassidy consistently brings performances to the screen that come across as trite and unsympathetic, have rendered their leading lady useless to the point of displaying mentally unstable behaviour.

What’s even more unfortunate for female viewers of all ages is that Felicity – who has consistently been an emotionally strong and highly intelligent character throughout Arrow – spends much of Guilty relegated to the sidelines in the B-plot in order to give Laurel more screen time. Further to the point, Thea (Willa Holland), who is just really coming into her own and beginning to reflect the DC Comics character Mia Dearden, doesn’t even appear at all.

More on the B-plot of Guilty – as teased at the end of the last episode of Arrow, Roy Harper (Colton Haynes), hasn’t been sleeping. He is plagued by a half-remembered Mirakuru fever dream of murdering Sara Lance (Caity Lotz), on a rooftop. Roy enlists the services of Felicity to test his blood for any remaining traces of the drug that may have spiked and caused him to black out and commit murder.

Guilty’s Hong Kong storyline (which is nowhere near as strong as the Lian Yu island storylines from previous episodes), collides with the episode’s B-plot. We see Oliver Queen learning a memory technique to open up forgotten parts of his memory … that consists of breathing deep and lighting a candle. While not a wholly original plot device on behalf of Oleson and Shimizu do absolutely nothing beyond copying down the introduction to a yoga class. This memory technique should have been a good place to include some magical jargon and little Easter Eggs for the hardcore DC Comics readers. As with Laurel as a character, the pair dropped the ball here again.

Ollie uses the Hong Kong memory technique on Roy and by the end of Arrow season 3 episode 6 Guilty viewers get an answer as to whether Roy is culpable or not. For her part, Laurel turns out to be right about Ted and Oliver is able to prove and accept that Grant is innocent. We get a peek at his previous career and a vigilante and the legend of Ted “Wildcat” Grant gets some brief appearances.

THE BOTTOM LINE: A WEAK EPISODE

Arrow season 3 episode 6 Guilty is probably the weakest episode in the season thus far. It bears omens of Laurel’s ascent to the mantle of Black Canary and I, personally, could not be less enthused for it. The writers have a show called Arrow and they need to focus the narrative of the season back on their titular character and built up strong characters – males and female – around him, rather than forcing one into the spotlight who does not serve Oliver’s character arch in any way.

This episode focuses on Laurel in actions that are supposed to make her seem brave and strong, but raise the question of her addictions more than anything else. It is the weakest episode of the season thus far.