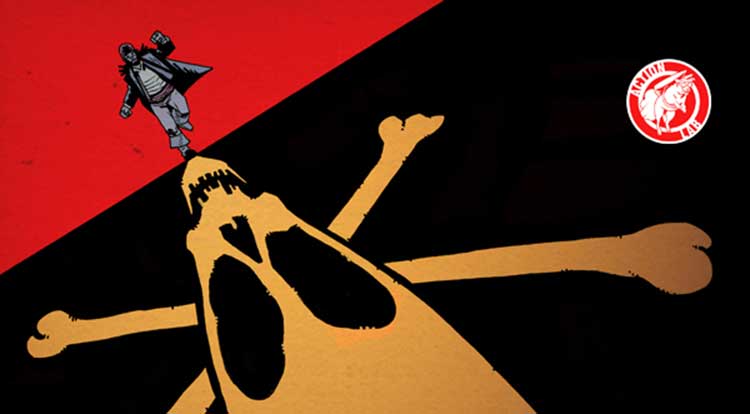 Pirate Eye, the genre mash up that took many by surprise is back!  Pirate Eye: Exiled from Exile, written by Josiah Grahn with art by Carl Yonder, is now a four issue monthly mini-series.  For the first issue of the series, there is a special variant cover painted by series artist Carl Yonder, limited to 1500 copies!

Combining elements of pirates and noir, Pirate Eye is the story of Smitty, an ex-pirate turned detective.  Banished from the sea, he is forced to take up residence in a port, relying on his brigand-honed skills as a ‘finder’ to make a living-until an old enemy exposes a secret that forces Smitty to flee for his life.  With a price on his head on land and at sea, Smitty will have to survive long enough to find out what went wrong, how to make it right, and who is responsible. ABOUT ACTION LAB ENTERTAINMENT– Formed in 2010 with the purpose of pooling their collective talents into a single, powerful entity, the members of Action Lab Entertainment have countless years in multimedia publishing, design, and business.  Their first release, Fracture, was successfully funded through Kickstarter and since then they have continued their mission to produce high quality, genre-spanning entertainment.  Since its formation, the accolades for A.L.E continue to build on a daily basis.  Among its more popular titles are all ages material like the Eisner, Glyph, Shel Dorf Award nominated series PRINCELESS, NFL RUSHZONE (based on the Nickelodeon Television series), Jamal Igle’s MOLLY DANGER, Artist/ Writer Jeremy Dale’s hit series SKYWARD, and Gayle Middleton’s (My Little Pony, The Littlest Pet Shop) monstrously adorable VAMPLETS. Action Lab’s Mature Readers imprint ACTION LAB DANGER ZONE continues to push the envelope of comics entertainment with titles as varied as EHMM THEORY and Dan Mendoza’s over the top horror-comedy ZOMBIE TRAMP, THE FINAL PLAGUE and BO, PLUSHY GANGSTA.