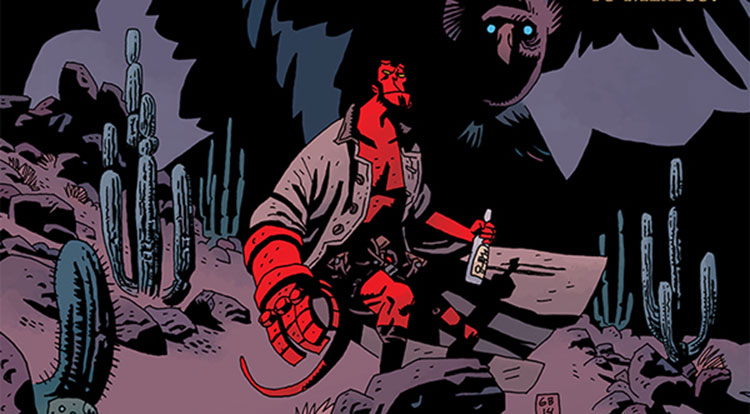 Dark Horse Comics will publish the milestone 200th issue of its Eisner and Harvey Award-winning comic book anthology DARK HORSE PRESENTS in February 2015, featuring the story MASKS by Gillian Flynn, the bestselling novelist of GONE GIRL, with art by Dave Gibbons, the bestselling artist of WATCHMEN recently named the first ever comics laureate. The 200th issue of the celebrated anthology will feature a HELLBOY cover by Gabriel Bá, an APE-X variant cover by THE GOON creator Eric Powell, and stories by some of the biggest names in comics, including legendary HELLBOY creator Mike Mignola, GROO Creators Mark Evanier and Sergio Aragones, Alex de Campi, Matt Kindt and Jerry Ordway.

“DARK HORSE PRESENTS #1 was the very first comic book our company published back in 1986 and from day one that comic set the tone for our ambitious and diverse publishing philosophy,” said Dark Horse Comics President & Publisher Mike Richardson. “When we started making plans for the landmark 200th anniversary issue of DARK HORSE PRESENTS, it was imperative we pull out all the stops to celebrate the legacy of the preeminent contemporary comic book anthology title.” The 80-page 200th issue of the multiple Eisner and Harvey Award series will feature:

Mike Mignola and Gabriel Bá revisiting Hellboy’s time in Mexico with a follow-up to their classic story THE COFFIN MAN.
Fred Van Lente and Miguel Sepulveda delivering a Project Black Sky story about the telepathic cyborg gorilla Ape-X
Brendan McCarthy’s DREAM GANG
Damon Gentry and Aaron Conley’s SABERTOOTH SWORDSMAN
The first chapter of a new GROO tale by Sergio Aragones and Mark Evanier
A mermaid story by Gustavo Duarte (MONSTERS)
Alex de Campi and Jerry Ordway’s SEMIAUTOMAGIC
Ed Brisson’s MURDER BOOK featuring art from Michael Walsh
The first ever U.S. publication of the short story MASKS, which was originally published in the UK’s GUARDIAN newspaper to commemorate the British Library’s exhibition of British comics. The story is the comic book debut for Gillian Flynn, the NEW YORK TIMES bestselling writer of GONE GIRL, which is now a major motion picture directed by David Fincher (FIGHT CLUB). She collaborates with artist Dave Gibbons, (WATCHMEN) for a story about mothers… and vigilantes.