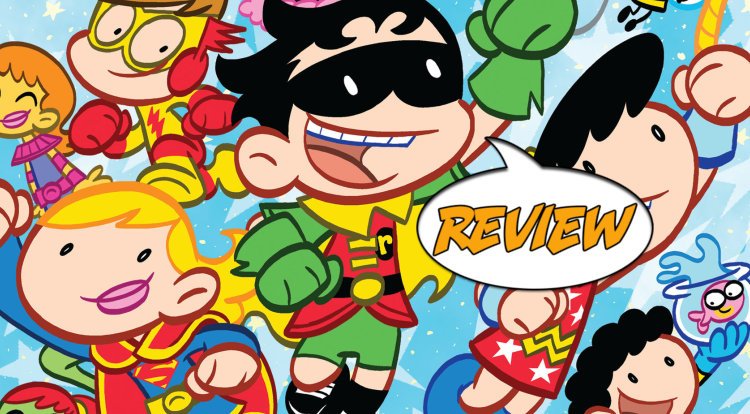 Tiny Titans: Return to the Treehouse #6 sees the Titans get the treehouse and Slade and Darkseid show up! Previously on Tiny Titans: Return to the Treehouse #5: Just when all hope of finding a new treehouse is lost, the girls travel to Paradise Island! Oh, what a wonderful place it is! But where are all the boys? And who’s Terra supposed to throw rocks at now?

LET’S SEE ALL THE BAD GUYS

Tiny Titans: Return to the Treehouse #6 continues in the amazingly entertaining tone of previous issues. Writing team Art Baltazar and Franco have proven repeatedly throughout their work on the series that they understand the spirit of these characters better than many of the writers on their main titles.

The Titans are in school! Sidekick Elementary is helmed by Principal Slade Wilson with Lunchlady Darkseid being promoted partway through the issue to substitute teacher. Baltzar and Franco cleverly give Cyborg the ability to call up Boom Tubes because “Cyborg has some sweet Justice League connections!” according to Beast Boy. Although this is just a clever reminder to readers that Tiny Titans: Return to the Treehouse #6 does exist within DC New 52 continuity, but it also acts as a clever plot device to transport the Titans to the Watchtower.

This issue features a prominent appearance by Batman – and boy is he grumpy! Imagine your shouty, grumpy relative and that is Baltazar and Franco’s Batman. He shouts at B’dg (Yeah, B’dg is in Tiny Titans: Return to the Treehouse #6). At Robin’s insistence that B’dg is a “Green Lantern pet” Batman shoots his sidekick down, insisting that B’dg is given the proper respect for his position as a Green Lantern – again, a nice reminder to readers that potentially just see him as a squirrel, rather than as a truly valuable superhero.

Batman continues his crusade to return the lost treehouse in Tiny Titans: Return to the Treehouse #6 by shouting for Superman’s aid and shouting at Brainiac to stop being a bad guy, essentially. The best thing about Brainiac’s brief appearance in the issue is that he has an entire Brainiac family – including Brainiac 5 … and a Justice League tablecloth for some reason – which is not something I ever expected to see in this comic series.

At the end of Tiny Titans: Return to the Treehouse #6 all of the underaged characters – heroes and relatives of Brainiac alike – wind up in detention under the supervision of Darkseid with the full knowledge that they will have to wait until the publication of the next issue to learn if they survive. Dun dun dunnnnnnn!

As in his capacity of a writer, Art Baltazar does absolutely perfect work on the art of Tiny Titans: Return to the Treehouse #6. Mary Marvel is the absolutely sweetest thing to see on panel after panel AND her costume looks cool. Similarly, Starfire’s costume is a more conservative update than what readers will currently see in Red Hood and the Outlaws, though similarly well-conceived and adorable. The regular cast of Titans do look equally stunning, but Mary Marvel and Starfire are really the surprising standouts.

Principal Deathstroke is a nice mesh of both worlds represented in Tiny Titans: Return to the Treehouse #6. Baltazar brings Slade Wilson to the page with his classic black-and-orange mask on top of a tired, grey plaid blazer that we all recognize from the school leaders of our childhood.

Similarly, Baltazar puts Darkseid on the page as a veritable brick. He’s not an especially threatening character as he appears in Tiny Titans: Return to the Treehouse #6, but he is visually striking and so differently designed from the young heroes that he does come across as menacing up to a point – and when one considers the younger readership that may be picking these issues up, I really think Baltazar struck an excellent balance with the design of both Deathstroke and Darkseid.

THE BOTTOM LINE: JOIN THE TREEHOUSE

Once again, Tiny Titans: Return to the Treehouse #6 is an incredibly well-conceived issue, amazing rendered by a team working to the best of their abilities. The story is charming and true to the characters that inhabit this particular series. Shame on you if you’re not already reading Tiny Titans.

Tiny Titans: Return to the Treehouse #6

Another fantastic issue of Tiny Titans! This time we get glimpses of Slade Wilson and Darkseid working in the Titans school!