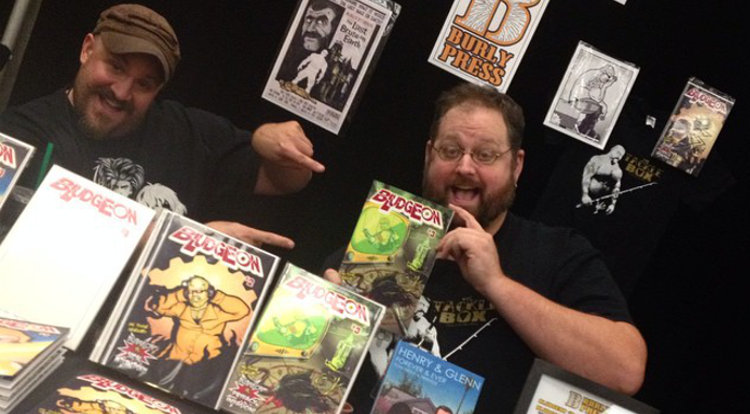 Jeremy Owen is an independent comic book writer, artist and half the creative force behind Burly Press. He has drawn pinups for Henry and Glenn Forever and Ever, provides art for The Red Shirt Diaries companion webcomic A Night in the Enterprise and is presently self-publishing his semi-autobiogrphical superhero comic Bludgeon.

Jeremy took matters into his own hands to bring a burly gay superhero to the independent comic book scene with Bludgeon and we caught up with him at Los Angeles’ premiere comic convention focusing on the LGBT community, Bent-Con.

Major Spoilers: Jeremy, can you tell us a little bit about why you’re an exhibit here at Bent-Con today? Jeremy Owen: I’m here to spread the word and sell my art and my comic books.
MS: And, you self-publish a lot of your comic books. Can you tell us a little bit about that process?
JO: Yeah, I self-publish. I even hand make my books right now, for the most part. Most of my books I print and staple and fold and cut all by myself. It’s labour-intensive, but I like the end product that comes out of it. In the future I’d like to move on to getting print runs done, but for now, I like – as a small publisher – I like being able to control the product and I really like what I put out. It feels more like art when it’s handmade to me.
MS: What would you say the biggest challenges are about being small press? What’s the ultimate end goal for Burly Press?
JO: The challenge of being small press is, obviously, getting the word out. Getting the word out is big. Advertising and trying to grow your business is tough especially in this day and age. We live in a gold age of DIY, so it’s the easiest it’s ever been to self-publish and to get your product out there, but at the same time, the market is flooded with people trying to get their own real estate in the business and I don’t have any designs on working for the Big 2 – although, if that did happen I would jump at the chance – but, I do it mainly for me and for my own sanity and a little grocery money here and there. I’m trying to grow and if I could grow this business to the point where I could do it full-time that would be awesome. I’m looking to expand in the future once I get my first story arch done, maybe get a collection. Instead of self-publishing that I would want to actually get a solid print run of that, try to get it in Previews and Diamond and things like that and get it out into the masses.
But, for right now where I’m at, in the learning process of running my own business and making my own product and be consistent about it, it’s growing at a decent rate.
MS: Speaking of control, I know that Bludgeon is based a little bit on your real life. Could you talk about that and why you wanted to bring that story to the public?
JO: Yeah. I was, kind of, a late bloomer and in the story Bludgeon is on his own for the first time after being a superhero for so long that he doesn’t really know who he is and he just figured out that he’s queer maybe 2 -3 years prior to the story and me, myself, I was a late bloomer too. I didn’t figure out that I was gay until I was 23 or 24 and, so that’s part of the story that I write in as part of me. He also came from my own alter ego from back in college. All of our friends had a superhero team called The Hooligans and every single one of us had our own superhero alter ego and that came from my co-writer’s high school experience, that’s where that started; and, so Bludgeon was me, but then, over the years it’s evolved into its own thing and his own character – but, I do have a lot of me in the story.
Primarily, the experience of being a late bloomer and being awkward and being – for lack of a better word – an “older person” onto the scene without any experience. Not that 23 was old, but older than somebody who figured themselves out at 15 or 16, so that experience I’ve written into the book as well.
MS: Who would you say are your top three influences on Bludgeon (thinking contemporary superheroes)?
JO: Contemporary superheroes, I don’t know. Some of my favourite books in contemporary comics have been The Maxx. Scud: the Disposable Assassin is a huge one – the creativity in that book and how crazy it gets. I draw inspiration from a lot of different sources, whether that leaks into my material or not is up to the reader to decide, but I’m very influenced by Rob Scrab and Sam Kieth and Jhonen Vasquez and, as far as the contemporary stuff, John Romita Jr.
There’s a ton of great comic art out there that I love and I hope to do justice with my own work, while trying not to imitate, but also trying to do justice to the superhero genre, while still keeping it personal and character-driven.
MS: How many issues are going to be in Bludgeon altogether?
JO: Well, we haven’t planned an end. We plan on keeping going with Bludgeon even though there might be breaks between story arcs. The first story arc is going to be about eight issues-ish because we started with a #0. We try to cram as much story as possible to get value for people’s dollars.
MS: Does Mike wind up happy in the end or are you taking the route that superheroes don’t get to get married?
JO: Our approach has been: nothing can be easy. That leads to conflict, that leads to drama, that leads to good reading, so we don’t want anything to be easy for Mike. Everything is going to be a struggle and is going to be hard for him, but at the same time, it’s not like I’m going to make an everybody dies at the end because technically he’s coming out of one of those endings.
My writing partner, Greg Freeland, is working on the story of the Hooligans, which is the superhero team Mike came from and that ended badly. Mike is coming from a DC-style everybody’s dead or in jail ending and into his own personal story. I’m hoping he can find happiness.
MS: What is your best piece of advice for people who want to get into self-publishing? JO: The best piece of advice is: stop pussyfooting around and just do it. I talk to so many people that say, “I had this idea,” and “I’m waiting for.” We live in the Golden Age of Do-It-Yourself. Just do it.
MS: Do you have any advice for people in the queer art community? Any words of wisdom?
JO: Especially for the queer art community is, again, do what you want to see. I started doing Bludgeon because I wanted to see a superhero story about a gay bear that wasn’t on the nose, that wasn’t porn. I wanted to see a big burly gay superhero represented in a comic book that was accessible to more than just the gay community. I’m trying to make my book accessible to everyone.
If you see an absence of what you want to see do it or talk to someone who can do it and collaborate and get it together and make it happen. You can make it happen now.