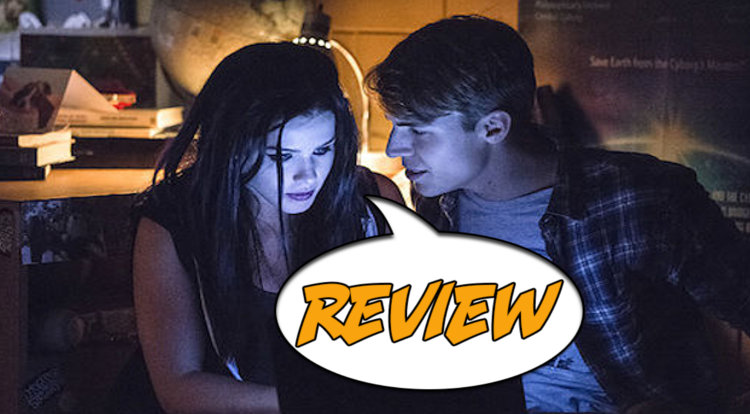 Felicity’s mother comes to town as do details of her past – both dead and alive. Previously on Arrow: Nissa cried and Ra’s Al Ghul showed up played by another white guy.

The fifth episode of the third season of Arrow is titled The Secret Origin of Felicity Smoak. It certainly proves that writers Ben Sokolowski and Brian Ford Sullivan have taken little-to-nothing from the character’s namesake existing character in the DCU and that comes with both positive and negative things that play out across this episode.

As with most episodes of Arrow, The Secret Origin of Felicity Smoak takes place between two timelines. In the not so long ago (four years, I believe they say), time of Felicity (Emily Bett Rickards)’s college years we learn that she was a goth-y kid! For such a darling and unique character as Felicity it does feel like and cheap and pedestrian move on behalf of the writing and design teams. That notwithstanding, Felicity has a boyfriend named Cooper (played adequately by Nolan Gerard Funk), and they are both of the hyper-intelligent computer-programmer types.

Felicity is the more prodigious of the two, though Cooper the more dangerously ambitious. Where Felicity uses her coding – and code-cracking – abilities to explore and test boundaries, Cooper is more inclined toward acts of adolescent anarchy with no real outcome save to enter into a pissing contest with the government that he ultimately loses. Eventually, Cooper is taken away to prison and Felicity later tells Ollie (Stephen Amell), that he died for their hacktivism.

In the present day Felicity is surprised by a visit from her mother Donna (Charlotte Ross), who is the exact opposite of Felicity. Donna is sexually provocative and not the brightest bulb in the closet, that being said, she’s an incredibly likeable character throughout the episode including when she gets flustered in the face of meeting the likes of Ray Palmer (Brandon Routh), Oliver Queen and John Diggle (David Ramsey). Donna repeatedly becomes an obstacle to her daughter throughout The Secret Origin of Felicity Smoak to the point where her daughter tells her to leave.

An evolving computer virus calling itself Brother Eye (a name many DC fans will instantly recognize), invades and threatens not only the sanity and health of Starling City residents, but the safety of the large organizations the dwell within any major city – social security, banks et cetera. The jargon used by this mysterious organization and the types of targets it threatens strongly recall things that Cooper says to Felicity in every flashback. In fact, it’s handled with such a lack of subtlety by Sokolowski and Sullivan that viewers can spot the big reveal of The Secret Origin of Felicity Smoak in the first act of the episode.

For her part, Felicity spends most of the episode as an emotional wreck (understandably), and skipping out on work. Every scene she shares with Ray Palmer involves her unprofessionally excusing herself. Perhaps it’s the intention of the creative team to prove Ray’s love for Felicity, but it comes off as her been a bad worker who takes advantage of her boss – who is even less qualified to be in the position he has found himself. Not the strongest outcome by either of them.

Her name is in the title, so by Arrow rules, Felicity is bound to save the day and, in the end, she does. By recognizing her own code in the Brother Eye program Felicity is able to deduce the identity of the man behind Brother Eye – and the viewing audience is pleased to have her catch up. However, the final act of The Secret Origin of Felicity Smoak is where the episode really begins to fall apart and lose a lot of the nice moments of character development that we’ve had so far.

Felicity and Donna are kidnapped and – in order to preserve each others’ lives – they must outwardly expressing the love and appreciation for the other that both women had thus far been unable to do. An emotional conclusion is shoehorned in amidst and following an awesome parkour rescue sequence by the Arrow and, then again on Donna’s last day in Starling City.

The Secret Origin of Felicity Smoak does have a stinger for Roy Harper (Colton Haynes)’s plotline as it ties into the death of Sara (Caity Lotz), that definitely makes me excited for the next episode coming down the pipe.

What The Secret Origin of Felicity Smoak ultimately proves is that Felicity was a much more compelling and dynamic character without a Vampire Diaries-inspired backstory and that she is probably the worst employee ever and out to be fired by Ray Palmer. It’s not the best episode of Arrow, but not the weakest. In the end, sadly, The Secret Origin of Felicity Smoak seems destined to remain secret.

Arrow season 3 episode 2 The Secret Origin of Felicity Smoak is none of the characters’ best moment – especially not Felicity’s – but it is entertaining amidst the overuse of the word “hacktivist”.

Felicity's mother comes into town as a villain from her past crashes into Starling City in a weirdly paced episode.