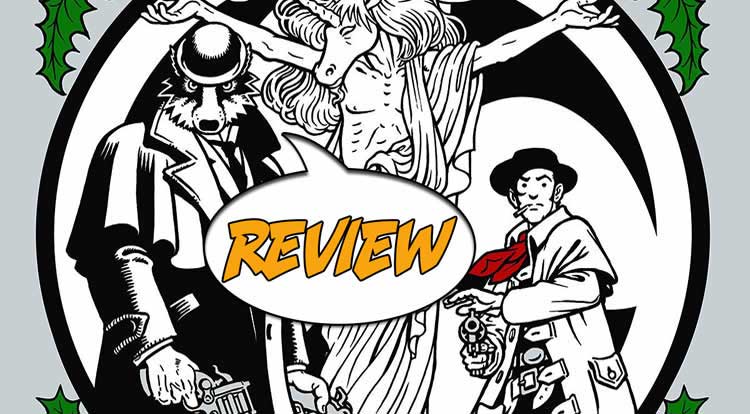 It’s fun to see our reality flipped on its head, which helps us understand what we’re going through better.

If you haven’t yet discovered Grandville, a series of hardcover GNs with animals playing the role of humans, and humans trying to rise up and take their place in society in this alternate world, I really recommend them. Because we see rats and badgers and toads, we expect them to act with a more “wild” feel to them, and that’s again the case this time.

Previously in GRANDVILLE: Detective Inspector LeBrock stalks a cult responsible for horrific mass murder. With Paris in the grip of a mysterious crime lord and violent attacks by human terrorists, can LeBrock stop the inevitable slide into fascism? And could this all be part of a centuries-old conspiracy to throw the world into war? Grandville Noël is the fourth volume of the popular steampunk series. It is described by Talbot as “like Jules Verne and Sherlock Holmes directed by Quentin Tarantino – with animals!”

THE ULTIMATE MARRIAGE OF SCRIPT AND ART

Since I consider myself something of a writer, I tend to be more concerned with things like plotting, characters and story twists and the like. Don’t get me wrong – I enjoy great art! It’s just that I don’t understand the making of it as well as I do the writing of a comic.

There are several writer/artists around. Probably the best known has been John Byrne, who could write a pretty decent story as well as draw action and facial expressions very well.

I felt that Mr. Byrne was the best of this category until I encountered the work of Bryan Talbot. He could very well be the best of the creators who can script as well as produce excellent art.

I’ve read all the previous Grandville hardcover graphic novels, and they’ve all been very engaging, with twists and turns along the way while being portrayed by what I refer to as “stunning” art.

I do like to point out that The Tale of One Bad Rat was literally over a decade ahead of most other comics. More than that, I will not say because to give any kind of story description would spoil that amazing hardcover. With the holidays coming, I recommend that book as well as the other Grandville hardcovers.

One of the great thing about this series of graphic novels is that, just when you think you know what’s about to happen next, you discover that you really don’t.

Talbot just won’t let the reader get comfortable, and that’s what I long for in my comics. If I can see what’s going to happen ahead of time, why waste my time reading that particular book? Talbot has always surprised me at least four or five times per book.

In this edition, Talbot takes on the touchy subject of religion. You’ll see illustrations that greatly resemble religious iconic artwork as the story progresses as well as allusions to today’s religions. Yet I wasn’t offended, and I doubt others will be either.

This time, the “doughfaces” or humans are becoming more and more interested in being granted equal rights, but the animals will have none of it. By putting the humans in the lowest class of society, Talbot is helping us understand what prejudice really is all about. Well done!

Of course, the characters continue to shine. I still enjoy Inspector LeBrock the most, but the others clearly have different characters.

Sometimes the animal-like characteristics of the people indicate what these individuals will be like, but not always. Again, we don’t see Talbot’s curve balls coming, and that makes the book truly worth reading!

The animals are truly “anthropomorphic” in nature in that most often, it is only the head that resembles an animal. The rest of the body seems almost completely human, which makes the prejudice against the “doughfaces” silly. Talbot can make the expressions on the heads very understandable, and that’s good because he doesn’t always use words to explain what’s going on. Again, I love a story in which I have to read and pay attention to visuals as much as I have to in Grandville.

Also, the actions are clear and dynamic, so the occasional fight as well as the running that British television and other storytelling is so famous for comes across very strongly.

BOTTOM LINE: Grandville Noël Is the Latest in a Series of Terrific Hardcover Graphic Novels!

I’ve tremendously enjoyed the previous editions of Grandville, and this sequel does not in any way disappoint. You can get it in the U.S. through Dark Horse.

Totally relatable, LeBrock untangles devious plots, but at the same time, he can’t sort out his love life. How realistic is that?

Grandville Noël is a volume worth adding to your collection. I do recommend buying the previous editions so you can get the most out of this tale.

Steampunk fan or not, you'll enjoy this fascinating tale about an anthropomorphic characters in a world that teaches us about our own!