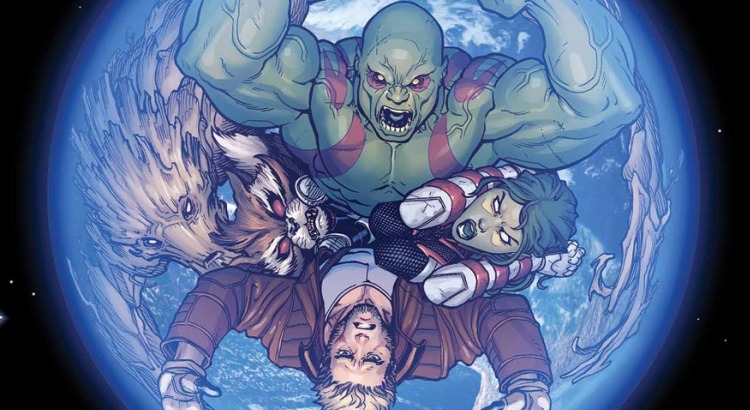 REVIEW: Guardians of the Galaxy #20

In the conclusion of the Guardians of the Galaxy Original Sin tie-in, we finally learn Nova’s fate in the Cancerverse. Did he go out as he lived, in a blaze of glory? Or was it not with a bang but with a whimper? Behold, thine review awaits! Previously in Guardians of the Galaxy: Gamora continued her interrogation of Peter Quill regarding his time in the Cancerverse. Star-Lord, Nova, Drax, and Thanos found out that not only were they trapped, but, thanks to some cosmic loophole, they also couldn’t die. Plus, they were also not alone, as the Cancerverse Revengers showed up with their eyes set on the cosmic cube. Unfortunately, it may have cost the unlikely heroes everything when it fell into the Revengers’ claws…

THE LAST WILL AND TESTAMENT OF RICHARD RYDER

At long last, Peter Quill revealed the final fate of Richard Ryder within the confines of the Cancerverse. After Thanos royally decimated the Revengers and claimed the Cosmic Cube for himself, it became clear that the only way out was for one to die. Seeing as how Nova was now down one arm and was probably not going to make it anyway, he chose to sacrifice himself to help Star-Lord, Drax and, very unintentionally, Thanos escape their prison universe. It wasn’t without one last request of Quill: Due to his unrequited love for Gamora, Nova asked Quill to never tell anyone of what happened there, especially Gamora, knowing she’d gone through enough without suffering that disappointment as well.

What really makes this book is Nova’s dying monologue. Before that, most of the book is primarily made up of battles and therefore doesn’t have much in the way of writing. Rocket Raccoon’s brief bit of dialogue is of course funny and Star-Lord has a few good one-liners, but Bendis did a particularly good job with Nova. Nova talks about what he loves about Gamora, lists a few regrets about his own life, but ultimately says he would trade that all to ensure that Quill and Drax survive even if he dies in the process. It’s the right mix of realistic dialogue and a sense of “what could have been”, without it being overly sentimental or preachy. It all culminates with the final image of Gamora processing Nova’s confessions of love–via Quill–making the ending very bittersweet, as it very well should be.

SO MANY NAKED DUDES…

A whole slough of artists worked on this book and it’s fairly easy to tell where one artist leaves off and another picks up. However, in this case it works, as it helps separate what parts of the book are taking place in the current continuity–Valerio Schiti’s work–and which parts are being narrated by Peter Quill–Ed McGuiness’s work. It also really works that Schiti would helm the portions of the book that take place in the current continuity–who’s male characters have much more realistic proportions–and McGuiness would take over the portions that occur from Quill’s account and his own imaginings of how things went down–as McGuiness’s male characters much more muscly and bulky.

Another thing to note is the sheer amount of male nakedness going on in this book. While you don’t see anything–as all the male frontal nudity is hidden in strategically placed shadows because this is a Marvel book–it’s really hard to not notice how nude everyone is becoming as their clothes are being blasted off left and right. In the end, Nova is really the only one in the Cancerverse who hasn’t managed to get his shirt off. Sure, it makes sense that all that fighting would shred clothes, however it’s really hard to take seriously anything that’s being said when Thanos’s tush is hanging out for all to see.

This book is a fairly good–though slightly predictable–end to the Guardians of the Galaxy Original Sin tie-in. Bendis does well with Nova’s death, though the rest of the book doesn’t have a ton in the way of substance. Other than the all-male nudist colony taking place in the Cancerverse, the art is solid with Schiti and McGuiness working well off each other in their own respective parts of the book. It’s a nice send-off for Richard Ryder, but, if you haven’t been following the Original Sin tie-in books for this series, you could probably just thumb through this one to get the gist of it.

Guardians of the Galaxy #20

Despite all the male tuchus, it's a pretty good conclusion to the Original Sin tie-in for Guardians of the Galaxy and Richard Ryder had a nice farewell monologue.