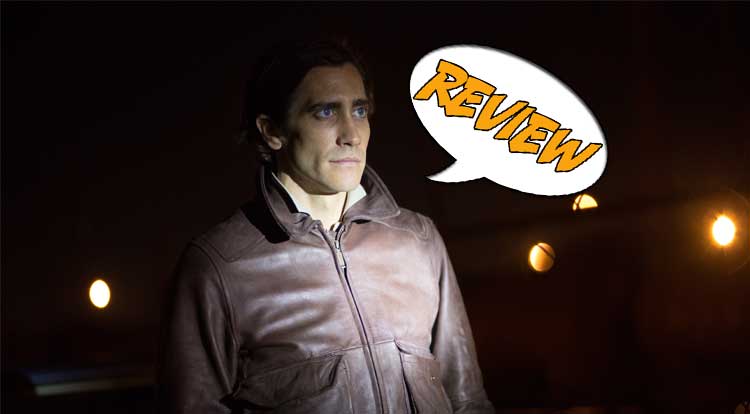 Nightcrawler has gained positive reviews since debuting at the Toronto Film Festival in September, but does the hype hold up now that the film has been released a wider audience?

“If it bleeds it leads.” an adage that if you are familiar at all with news production you will know by heart. A fatal shooting? Put it at the top of the hour. A car on fire after a drunk driver runs into an embankment? First image you see at 6 o’clock. But blood doesn’t guarantee that a story will be reported on. Who’s blood it is factors into if a news organization will give it any coverage at all. A car wreck in an affluent neighborhood is sure to get more coverage than a stabbing in a predominately minority neighborhood.

Those ideas are given to audiences throughout Nightcrawler.  A film all about the exploitation of tragedy for personal gain.

Jake Gyllenhaal plays Louis Bloom, a character we are suppose to believe that is down on his luck and will pursue any opportunity to land a new career. After selling off stolen chain link fence, copper wire, and man hole covers, Louis drives past a car wreck and stops to watch police officers pull the driver out of the burning vehicle for no apparent reason. Perhaps he is just drawn to human suffering. While on the scene Louis speaks to Joe Loader (Bill Paxton), a freelance videographer that turns on police scanners to find the bloodiest crimes and accidents Los Angles has to offer every night.

That meeting would set Louis down the career path of night crawling, the term used to describe people who wait for tragedy to strike so they can show up on scene with a camera in hand and the record light flashing. Forget the well being of those involved. Cheer for a high body count. Smack talk the competition on how you were first on scene to multiple charred bodies. See the dollars signs when you beat the police to a crash and, if you are Louis, re-arrange the bodies to capture a more “appealing” image.

Now, audiences can’t put all of their disgust solely on Louis’ back because all of his work is meaningless if there isn’t a news outlet willing to put it on air. Rene Russo plays Nina Romina a one time reporter who is now the late night news director at the Los Angles news station KWLA. Nina describes their broadcast as “a screaming woman running down the street with her throat cut open”, a perfect home for Louis to sell his work.

A professional relationship begins between Nina and Louis. Louis goes and films the happenings of an LA night and brings them to Nina first and in turn she compensates Louis above average rate for his brand of footage. It is a relationship that works smoothly and is a benefit for both parties, but that isn’t enough for Louis. Louis is not a schlub. He educates himself on whatever his current endeavor is so that he can have the upper hand, a trait that puts him in a position to leverage the coming news ratings week against Nina in order to obtain the sexual favors that he desires.

While Nightcrawler is certainly a criticism of the news media, the idea which is the backbone for the story is the manner in which humans will exploit others for their personal gain. The film does this through the relationship between Louis and Rick (Riz Ahmed), a true down-on-his-luck guy who is hired by Louis to help him listen to police scanners and navigate Los Angles. Louis reluctantly pays Rick $30 a night for what he does while he is being paid hundreds all the way up to $15,000 a night by Nina.

Rick is the moral compass of Nightcrawler voicing his concern over some of the material that Louis is willing to film and sell to the news station. While Rick sees the tragedy of what has happened, Louis only sees his video leading the news the next morning. But this is only when Rick is making next to nothing. As the film closes in on the climatic scene of the film, Rick looks past the depravity and broken laws once Louis offers him $25,000 if he will stay with him as they pursue their biggest story yet. When Rick agrees to continue, we are left wondering if we too would risk the endangerment of ourselves and others while breaking the law if presented the chance to make more than we have all year in one night.

The dark tone of the film is brought to life on screen by cinematographer Robert Elswit (There Will Be Blood, Boogie Nights) who uses the new LED streetlights in LA to bring a stark clarity to the world we are presented. When LA decided to change out the old halogen streetlights for new LED lights, the color tone of the entire city changed. No longer is there an orange haze surrounding LA, but a crisp, darker city with a slight blue tone, which certainly influences many decisions throughout the process of filming. KWLA’s main station color is blue. The van of a rival nightcrawler is blue. But Louis doesn’t want to blend in with the city, he is looking to standout and be noticed. So when he decides to upgrade his car what does he go with? A bright red Dodge Charger.

Jake Gyllenhaal gives a performance that is sure to lock up his first Oscar nomination for actor in a leading role with Nightcrawler. In an entertainment environment that is bringing anti-heroes to the screen more each and every year, Louis Bloom is one to be remembered. A character in the end that doesn’t receive blowback for the misdeeds he has committed, which stands as reminder that as long as we reward news organizations that show blood first and ask questions later, Louis Blooms will always be out there.