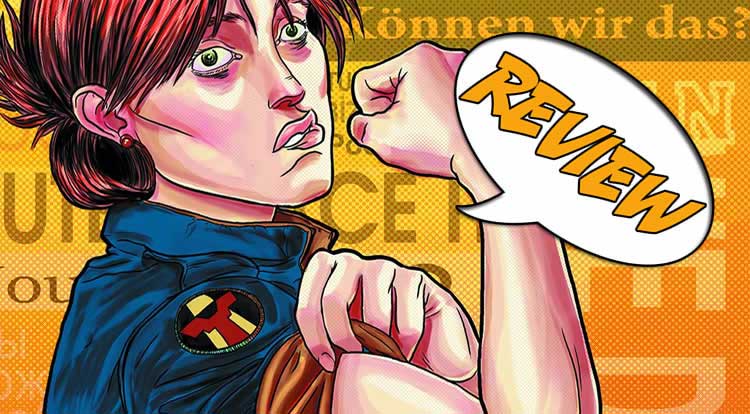 Look, nearly every one of us has endured THAT job – the one that makes the rest seem palatable.

Mine was the one that took place in my local high school, cleaning out the building just before the new school year began. I had to lug pails of clean water from room to room so the cleaning ladies could mop up the wooden floors. Then, once each pail’s water became filthy, I had to carry it to the bathroom so I could empty it out, then replace it with new water.

I literally couldn’t wait for the last day of summer.

That’s something of what’s going on in this fun miniseries, and the last issue hit the stands this past Wednesday.

Previously in GIANT ROBOT WARRIOR MAINTENANCE CREW: “This is it! The final chapter of the most bizarre giant robot story in history ends with a bang! Can Erica Pratch and the maintenance crew save Herotron from its most dangerous adversary – the pilots? It’s a race against the clock and common sense in this epic exclamation marked comedic conclusion!”

Erica went to school in order to become a pilot of a Transformer-like robot called Herotron, sent out to keep the universe and its inhabitants safe.

However, she didn’t qualify to be a pilot. She did still want to make a difference, so instead she joined the robot’s maintenance crew.

The people she’s working with have had to endure indignities from the group that DID earn the ability to work as a pilot. Also, the robot’s accountant has gone nuts as a result of what’s been happening there. He was recently discovered in Herotron, and seems somewhat okay … for now.

Erica’s supervisor has had just about enough from the pilots, so when he discovers that Herotron is about to fall apart at the seams, he feels it’s time to give those pompous pilots a piece of his mind even though they’re under attack by an alien force.

This third and final issue of the miniseries is a tremendous amount of fun, and some folks get what’s coming to them. Others learn a thing or two, and Erica … well, she’s anxious to move up the ladder. But will she?

Even though largely happens in a sci-fi setting, it’s still very “real” in the way people act and how things take place.

My favorite character in the series has to be Erica, who sees her dreams shattered only to find her place in Herotron seriously reduced. That has to hurt!

Both action and character sequences are enjoyable and engaging regarding the scripting. When you reach the end, I’m sure you’ll feel that it’s been just as enjoyable a journey as I found it to be!

Honestly, if Mr. McCoy’s art hadn’t been so strong, I think the scripting would have been a LOT less understandable and enjoyable.

The action sequences are easily perceived, and the facial expressions of the characters are also easily understood.

The best part about McCoy’s art is that I could swear I’ve met and gotten to know some of these mechanics, accountants and all at some point in my life. I know them very well, and that helped make this miniseries as excellent as it is.

We’ve all wanted to run huge androids or robots, to take on other big ‘bots in the heat of battle. In this miniseries, we get to meet these people and experience their adventures.

I want more! Hopefully, there will be another miniseries coming our way before too very long. Me, I could easily see this story turned into an animated film to air on any cable network that likes telling tales enjoyed by all ages!

Want to learn more about Giant Robot Warrior Maintenance Crew? Go to the Cosmic Times website here. Also, be sure to check out my interview with Mervyn McCoy about this book during a recent Wayne’s Comics Podcast by go to this location!

Terrific story that goes inside a giant robot warrior!