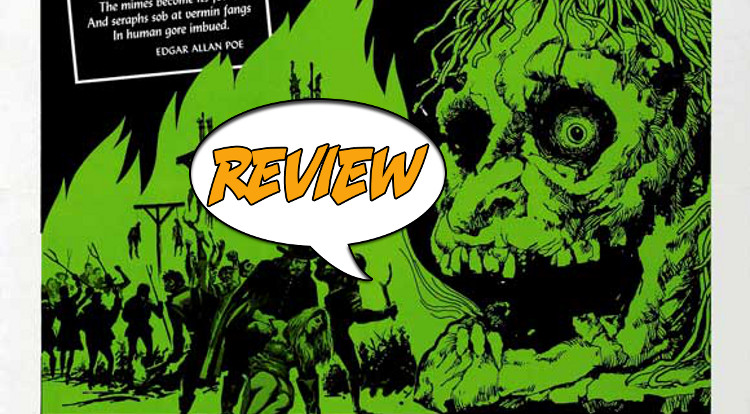 As October draws to a close, so too must Friday Night Frights. The final entry? The cultish Vincent Price vehicle, Witchfinder General. One last time, let’s play the alternate title game. The original title for this film is Witchfinder General because, and see if you can stay with me here, the film is about Matthew Hopkins, a witch-hunter who claimed the title Witchfinder General during the English Civil War. Of course, in America, the film was retitled by the American distributor to The Conqueror Worm, after Edgar Allen Poe’s famous poem. Not that the film has anything to do with Edgar Allen Poe, for obvious reasons, but the distributor had a profitable series of film’s concerning Edgar Allen Poe so why not make a connection that doesn’t exist, if it’ll garner an extra buck?

NOW THAT THAT’S OUT OF THE WAY

Horror is a funny genre. Not only is it rife with confusing and weird alternate titles, but a key part of the genre is how it deals in shocks and scares. Horror is in an arms race against itself to continually top itself in the shock department, with a resulting creep in what polite society finds revolting from one generation to the next. What horrified British censors in Witchfinder General in 1968 would barely merit a blip on many primetime network crime dramas. What was horrifyingly sadistic in the late 60s doesn’t hold a candle to the awfulness in a Saw or a Hostel. In horror, whether or not these shocks are deployed solely for shock’s sake or for something more meaningful is what makes the difference in how well a film stands the test of time. Psycho was once considered unimaginably gory, as was Texas Chainsaw Massacre. So too it was with Witchfinder General.

Witchfinder General was released in Britain in 1968, and it was subject to much handwringing even before the script was finalized. The film portrays the exploits of Matthew Hopkins (as played by Vincent Price), a real-life witch-hunter who plied his trade amidst the conflict between the Roundheads and the Royalists. It opens on a pastoral setting, beautiful, except for the man erecting a gibbet, and the screaming woman being dragged toward it. The Hopkins and his crony Stearne employ grisly tortures to elicit “confessions” from suspected witches, who they then execute. They also receive a few silver guineas from the local magistrate in return for their troubles. Meanwhile, the Parliamentarian cavalry trooper Richard Marshall looks forward to a leave with his beloved, betrothed Sara and her priestly uncle John. You can imagine where it goes from there – Hopkins and Stearne investigate Marshall’s loved ones, resulting in torture, murder and sexual assault, so Marshall must take his revenge.

Vincent Price is predictably the main draw for Witchfinder General. His Hopkins has the familiar nasal Price voice, but absent is any trace of his usual campiness. In place of the camp is a silky smooth, sinister presentation. Hopkins is all business, a true predator, utterly unconcerned with his own contradictions and hypocrisies. “We are doing God’s business,” he intones, while overseeing torture and murder, getting paid for it all the while. His underling Stearne is a gleeful sadist, who genuinely loves the violence he inflicts. Hopkins is much more removed; it’s unclear how much he actually believes in his mission, and the only things that he seems to enjoy even slightly are the sexual liberties he takes. He is the very picture of a banal, business-like evil, festering in a broken society. He’s all cruel pragmatism, and one gets the sense he’d enjoy chopping wood just as much as ruining lives, if only it paid so well. Price’s Hopkins is all the more terrifying for how such characteristics are present in so many individuals in both contemporary and historical society.

Few of the other characters get off easily, either. Aside from Sara, her uncle John, and Marshall, everyone else is seemingly venal, amoral, or apathetic. Marshall’s Parliamentarian comrades casually steal food and horses from civilians, and treat the pursuit of Royalist fighters like a fox hunt. It’s a country without the rule of law, where violence is the only means of power or protection. These themes are powerfully evoked in the film’s ending, as a woman screams over a montage of depopulated settings. It’s a coda, recapitulating the film’s beginning, arguing against the activities of the film’s climax, which would’ve been portrayed as heroic acts in a lesser film. It is a chilling, depressing ending, which is great stuff in horror.

BOTTOM LINE: WHAT COULD HAVE BEEN

Witchfinder General is all the more striking due to Michael Reeves’ unfortunate passing less than a year after the film debuted. The filmmaker was 25 years old, belying the savvy direction at play in the film. His camera angles and edits are quite modern, helping Witchfinder General avoid the pacing problems that plague many a movie from yesteryear. His famously antagonistic relationship with Price on the set ended up producing a chilly, terrifying portrayal of Matthew Hopkins that ranks up with the best of Vincent Price’s acting. Witchfinder General still holds up, and is well worth your time. It is a shame Reeves couldn’t produce more work. Witchfinder General has seven stabbings, four shootings, three dunkings, multiple mentions of Roundheads, multiple mentions of papists, Running Fu, Flintlock Fu, Tankard Fu, Halberd Fu, a spur to the eye, Axe Fu, a burning, a hanging, and Vincent Price saying “They swim… the mark of Satan is upon them!” Check it out.