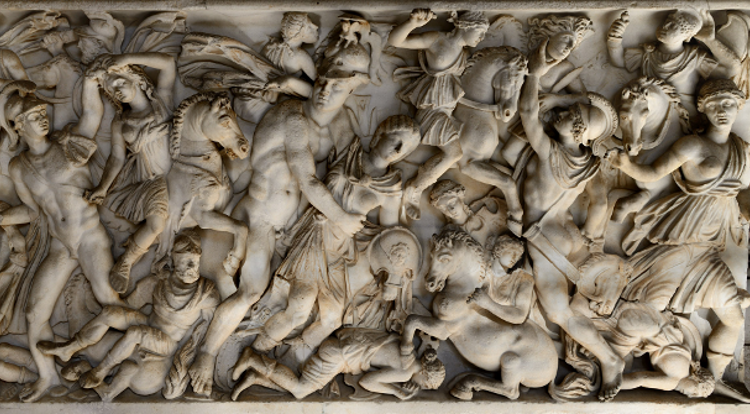 Winston Churchill tells us that heroes fight like Greeks, but then why are there so few Greek superheroes? At least we still have Wonder Woman. Ancient Greece casts a long shadow over the breadth of the Western canon. Creators from Shakespeare to Zack Snyder have heard the siren call of antiquity, adapting tales from a mythos laid down more than a thousand years previous. This is especially true in comics, where it is not uncommon to hear fans defending the art form by comparing the status of Superman in today’s world to that of a Hercules or Hector in Ancient Greece. It is hard to overstate how foundational Hellenism is to Western culture as a whole, and the influence the classics have had on art, literature and comic books.

So then why is the treatment of Greece in modern comics so creatively bankrupt? The fetishization of Classical Greece has led to the unfortunate tendency to ignore modern Greece, as if the country was frozen in time circa 27 B.C., with no semblance of culture generated since. Modern Greece is a much messier place than the archaeologically-inaccurate, sterile alabaster depictions of antiquity that are commonly pushed. That complexity requires a creative ambition to address it. It seems many creators feel it is safer to tell the same stories people have been telling for thousands of years. This has created a legacy where Greece is perceived culturally in a kind of temporal stasis. It is what led my fellow students to ask me through middle school if I worshipped Zeus when I identified my religion as Greek Orthodox. It’s also what leads writers drawing from Greek traditions to be woefully boring.

Wonder Woman is one of the few Greek heroes to be recognizably Greek, while also being an original creation. Rather than being another Zeus or Agamemnon or Athena, Diana is a modern creation synthesized from classical sources. Ancient Greeks placed Amazons on the far fringes of civilization and would not have recognized them as Greek themselves, but the Amazonian story comes from the Hellenistic world and is folded into the rich ethnic stew that makes up antiquity. The power of Wonder Woman, in a narrative sense, is how this character blends the old and the new, the mythological and the contemporary. From a Hellenistic myth is drawn a powerful feminist symbol for the modern era. Wonder Woman is best when she serves this syncretic function. Take her too far from her roots (by, say, having her become a kung fu master) and you lose the core of the character.

I won’t pretend to be the most well-read reader of Wonder Woman, so my authority on what are her best stories is suspect. I find Brian Azarello and Cliff Chiang’s recent interpretation to be my favorite for how it breathes life into old mythology. It takes the framework of the old Greek myths and builds something new out of it. Gone are the hoary depictions of Greek gods in their togas (which is not a Greek garment) and laurel wreaths. Instead, we have interesting character designs that evoke strangeness and wonder. Instead of Poseidon in the form of King Triton from The Little Mermaid, we have a monstrous amalgamation of marine life. Hades is a frightening mass of wax atop a child’s body, evoking a funereal sense. Wonder Woman herself is tough, confident and decisive. My second favorite interpretation is in the pages of Kingdom Come, where she serves as a straightforward foil to Bruce Wayne’s shadowy machinations and Superman’s angst. It’s an old school approach, appropriate for a warrior of antiquity. She is neither bellicose nor naïve, but a force all of her own.

Wonder Woman is by far the most prominent “Greek” superhero, but there is precious little competition. The runners up are Olympian re-treads (Ares, Hercules) and an inexplicable ninja assassin (because Greeks are very into ninjitsu), so perhaps that is faint praise. However there is no question that Wonder Woman is one of the most significant and well-regarded superheroes. Comic books, as has every Western art form, have borrowed a lot from Greece. But rarely has it been done so well as with Wonder Woman. So long as we’re raiding the Greek classics for material rather than drawing on modern Greece, it is best done with the grace, class and originality of Wonder Woman.