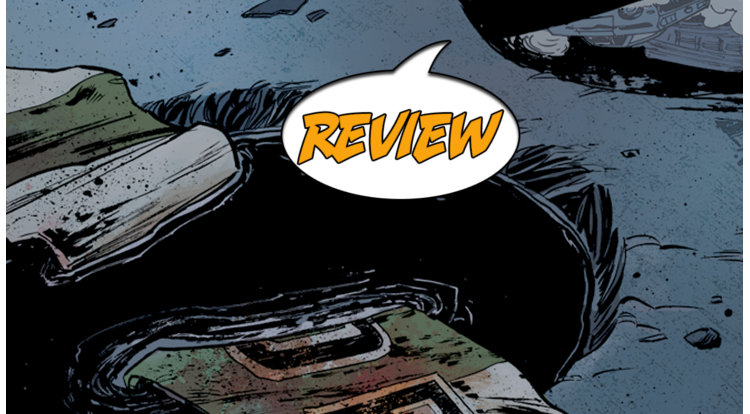 Dex Parios squares off again CK over and over again throughout Stumptown #2 as the investigation into a local shooting takes off and rumours are already flying. Previously in Stumptown vol 3 #1: Greg Rucka’s fan favorite private eye is back in a new ONGOING series illustrated by Justin Greenwood (Image Comics’ THE FUSE)! Things never go according to plan for Dex Parios–it doesn’t matter whether it’s work or play. When a weekend of soccer fun (both playing and watching!) turns ugly, it’s up to Dex to get to the bottom of the violence before a heated rivalry transforms into an all out war!

BATTLE OF THE LADIES

Greg Rucka opens Stumptown #2 in the aftermath of Mercury’s shooting. Dex Parios and her brother Ansel – sincere, but certainly not the brightest bulb in the shed), immediately face questioning at the hands of the Portland Police Department for their proximity to the shooting.

Rather than go home, rest up and stay where the PD can keep an eye on her, Dex and her brother promptly head to the hospital to more closely monitor the situation – or in Ansel’s case, to fall asleep in the waiting room. At the hospital readers of Stumptown #2 meet a man named “Old Ben”. Rucka introduces the character positively by having him offer Dex a cup of coffee and present himself as an empathetic ear also invested in Mercury’s medical state, however, it is quickly revealed that Old Ben only wants to plant rumous; to make a guess at Mercury’s assailant.

Already Rucka is forecasting the conflict to come later in Stumptown #2. By the time CK comes poking around Dex’s individual investigation of the crime scene. The visual contrast of the two characters aside, it is really, really fascinating to watch two strong, determined women who work on the edge of law enforcement as they come at the problem of solving an attempted murder from two clearly individual perspectives. Additionally, to have Stumptown #2 penned by a male writer is impressive.

The best moment in Stumptown #2 is the issue’s closing scene. CK and Dex grudgingly go to breakfast together (and we get a cleverly sarcastic reminder that CK is from Seattle and, according to the law of hipsters, a coffee snob), where they proceed to compare notes (and there aren’t many), and vow to the other that regardless of any obstacles they are going to bring the perpetrator to justice.

Dex’s conviction and the strength of her beliefs carry the narrative of Stumptown #2. Even with nothing by way of evidence readers are able to back her convictions. When Rucka sprinkles little nuggets of evidence throughout the issue we revel in Dex’s discovery of them. It begins with her protection of Ansel and goes to her mother bear dedication to bringing justice to Mercury.

Dex Parios may not be the Sherlock Holmes of Portland, but Stumptown #2 cements that she is absolutely the right woman for the job and entertaining as all get out to read.

… but I do. Artist Justin Greenwood is new to the world of Stumptown having come onto the title with this third volume. His linework is what I would tend to describe as “loose” and not usually a style that I’m fond of. That bias in mind, I love the art throughout this issue.

Let’s begin with protagonist Dex Parios. She’s not real pretty. She’s not tiny. She has sharp edges, her tough attitude bleeding over into her outward appearance. Similarly, CK isn’t exactly soft around the edges and she stands out a little bit as being one of two African-American characters in the pages of Stumptown #2.

As mentioned above, the women contrast each other visually as often as they butt heads throughout the issue. Colourist Ryan Hill keeps both Dex and CK grounded in the real world, filling them in with the washed out colours that permeate the city of Portland itself. Everything in Stumptown #2 feels as if it has been rained on for days adding another layer of obstacles for the characters to work against.

THE BOTTOM LINE: HOPE YOU KNOW THE WORLD

Stumptown #2 is a very well-constructed issue with the entire creative team bringing their A-game to the page. It is an interesting read, but so much more enjoyable if you are familiar with Dex Parios and the two previous volumes of Stumptown.

Stumptown #2 features Dex Parios beginning her investigation into the attempted murder of Mercury and, through a conversation with CK, cements her strength of character and will.