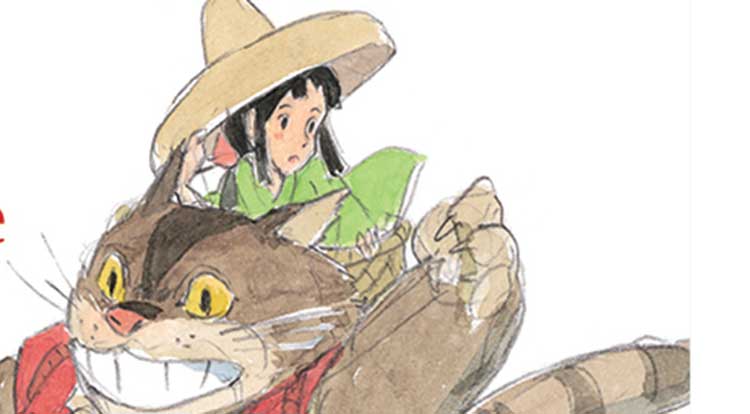 VIZ Media, LLC (VIZ Media), the largest distributor and licensor of manga and anime in North America, delivers a treat to readers and fans of famed director and pioneering creative visionary, Hayao Miyazaki, with the release today of PRINCESS MONOKOKE: THE FIRST STORY.

The oversized (11¾ x 11¾ inch) hardcover release is published under the Studio Ghibli Library imprint and carries an MSRP of $34.99 U.S. / $39.99 CAN. The beautifully illustrated storybook features Hayao Miyazaki’s original watercolor artwork, which complements his thoughtfully written fable about man’s need to maintain ecological balance with nature that became the origin for the 1997 feature film. An afterward written by Miyazaki lends further context and insights to the Mononoke story and its deep and lasting impact upon the director.

This is the original Princess Mononoke story, created by Hayao Miyazaki in 1980 while he was first conceptualizing the landmark animated film that would be released to universal acclaim seventeen years later. As an initial version of the tale, it offers a new and significantly different perspective from the final version presented in the film. After a long, exhausting war, a samurai lost in a forest encounters a giant wildcat – a mononoke. The beast saves his life, but at the price of his daughter’s hand in marriage…

“Princess Mononoke was a historic release for Hayao Miyazaki and Studio Ghibli and propelled the animation auteur to an entirely new level of international fame,” says Masumi Washington, Senior Editorial Director. “But few know of THE FIRST STORY, the imaginative fable that was the genesis for his groundbreaking film. This premium storybook fittingly presents it for the very first time in English and prominently displays his expressive watercolor characters and landscapes. We look forward to readers discovering Princess Mononoke in a whole new way in this unique release!

VIZ Media also invites fans to also explore the imaginatively conceived world of Princess Mononoke in THE ART OF PRINCESS MONOKOKE (MSRP: $34.99 U.S. / $39.99 CAN). The substantial hardcover edition from the Studio Ghibli Library imprint features an all new translation and contains a trove of insightful interviews, original concept sketches, character art and finished animation cels, and a look at the computer graphics technology used in the film’s production.

The Studio Ghibli Library imprint is exclusively devoted to the work of iconic Japanese film director Hayao Miyazaki and his famed animation studio. The imprint has collected a substantial catalog of full-color art books, film comics, children’s picture books and other releases celebrating Studio Ghibli films such as Princess Mononoke, The Wind Rises, Howl’s Moving Castle, The Secret World of Arriety, Ponyo, Spirited Away, Kiki’s Delivery Service,  My Neighbor Totoro, Nausicaä Of The Valley Of The Wind, and Pocco Rosso. Hayao Miyazaki is one of Japan’s most beloved animation directors. In 2005 he was awarded the Venice International Film Festival’s Golden Lion Award for Lifetime Achievement, and his Studio Ghibli received the festival’s Osella Award for overall achievement in 2004. Miyazaki’s films include Spirited Away, winner of the 2002 Academy Award® for Best Animated Feature Film, as well as The Wind Rises (nominated for an Academy Award for Best Animated Feature Film in 2014), Castle in the Sky, My Neighbor Totoro, Kiki’s Delivery Service, Princess Mononoke, Howl’s Moving Castle, and Ponyo, all of which have received tremendous acclaim in the U.S.

Miyazaki’s achievements also include the highly regarded manga series, Nausicaä of the Valley of the Wind, and a pair of memoirs, Starting Point: 1979-1996, a collection of essays, interviews, and remembrances chronicling his early career and the development of his theories of animation, along with Turning Point: 1997-2008, which details his rise to unprecedented international notoriety. All of these titles are published in English by VIZ Media.