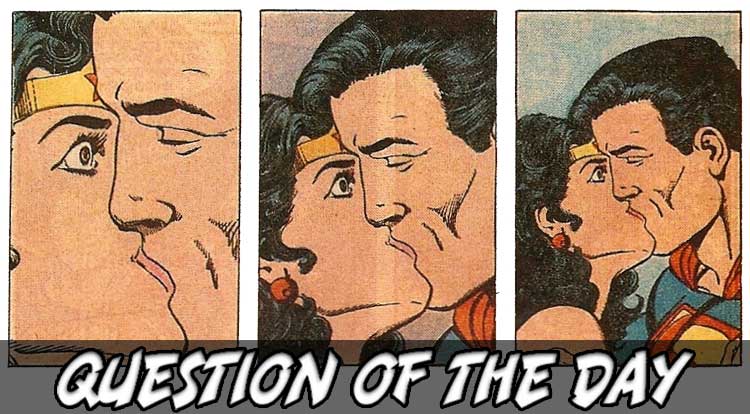 In her very first appearance, Wonder Woman met and became enamored of Air Force pilot Steve Trevor, a relationship that continued off and on for decades, and spanned at least five resurrections between the two of them.  Though Trevor is around in the New 52, Wonder Woman’s dance card has lately been filled by fellow hero Superman, a pairing that many fans have been clamoring for.  Though in some ways it makes sense that they’d have an attraction (especially since they wear the same colors, have the same blue hair, and work side-by-side, day after day), the idea of a Superman/Wonder Woman kiss is as creepy to me as the idea of a Quicksilver/Scarlet Witch liplock.  Though I’m used to being in the minority, especially when it comes to pop culture romance (#TeamMaryJane  #TeamSilverStCloud #TeamLanaLangAsLongAsShe’sNotKirstinKreuk  #Starfire+Robin4Eva), I’ve long wondered if this one is just me, which leads us to today’s osculatory query…

The MS-QOTD (pronounced, as always, “misquoted”) rather enjoyed the Justice League Unlimited cartoon’s toying with a Batman/Wonder Woman relationship, but always thought she’d be happier with Plastic Man, asking: Do you like the idea of Wonder Woman and Superman as a romantic pairing?