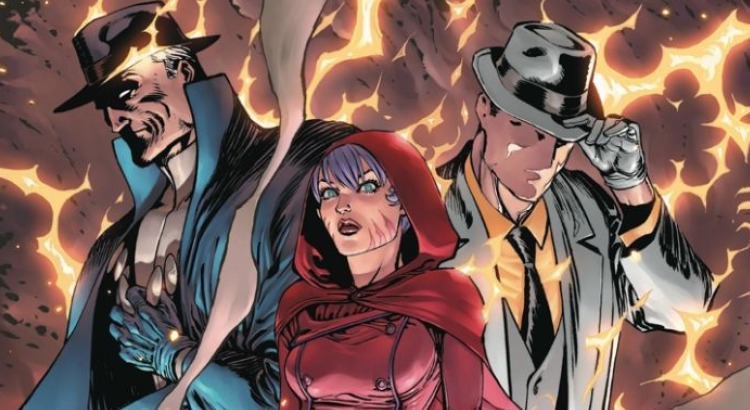 It’s time for a team-up of the DC Universe’s most notorious sinners! What sort of crazy hijinks can Pandora, the Phantom Stranger, and the Question get into?

Previously in Trinity of Sin: Nada! New series! Though it helps if you have a vague understanding of what Pandora and the Phantom Stranger have been up to in their own books.

The Phantom Stranger, the Question, and Pandora are all enjoying their own private lives. The Phantom Stranger is hanging out with Doctor Thirteen in San Francisco, solving mystical cases. Pandora is relaxing on a Goa beach. The Question is trying to find out who he is in Chicago. That all changes when a mystical entity by the name of Nimraa sends out her three minions to collect the trio, destroying any chance the three had at living their separate lives and forcing them (mostly) together once again to get to the bottom of this dark entity’s plans.

J.M. DeMatteis does a fairly good job of narrating in the various mystical voices of each character: The Question is still asking questions, the Phantom Stranger is still talking about atonement, and Pandora is still enjoying her freedom from the judgment passed on her years ago. In addition, DeMatteis has introduced a number of villains that really only the trio can defeat. One of the maddening things about the introduction of new villains is that sometimes they are too overpowered or too underpowered for a hero (when really they would be a better match for someone else). Here, though, DeMatteis has introduced a villain that only the Trinity of Sin can defeat—one that the Justice League or any of its incarnations would probably have a difficult time tackling.

While this book was okay, something keeps nagging at one’s mind: this is not the pre-52 Question. One of the endearing things about Vic Sage (and Renee Montoya) was that he was human—a way toned down Batman and detective-of-sorts, DC’s answer to the call for a Rorschach-like character. Sure, he had some mystical training in some of his solo series, but he was still human and painfully mortal. This new Question is definitely not that person. As seen in some of his other appearances in the New 52 universe, he’s a mystical sinner whose identity has yet to be revealed. He has an understanding of magic and has lived since the judgment was first passed on Pandora, the Phantom Stranger, and himself, making him immortal. It’s an okay past, but it takes away from what made him a great character to begin with: that he was a man who was able to kick ass and take names despite his mortal nature. While none of this is DeMatteis’ fault, as he is undoubtedly just working with the material he was given, it’s still a very prominent itchy thought in the back of one’s head that this isn’t Vic Sage.

ATTACK OF THE 20-FOOT TURKEY VULTURE!

Until we get to Nimraa. The big reveal of who this demonic evil is that is threatening to send the world into eternal night and darkness didn’t really hit home like it was intending to. If anything, the Big Bad just looks kind of like a vulture wearing armor, which may have been the point. Honestly, her minions, Ya’aka, Zalkoat, and Sydenn, all looked more intimidating that she. And the term “her” is used loosely, because it’s hard to tell if Nimraa is male or female, save for her armor which hints at the possibility that she might have breasts.

OVERALL: DID I MENTION I REALLY MISS VIC SAGE?

DeMatteis did a fairly good job at narration and writing for this book and introduced pretty good villains for the trio to take on. With the exception of their turkey-vulture Big Bad, Guichet and Gorder do a fairly good job on art. However, while I’m not an avid nu-52 hater, I do think DC messed up bad when they made the Question a mystical entity and not a mortal investigative reporter and I continue to really miss Vic Sage and Renee Montoya. This is something that’s not DeMatteis’ fault, though. If you’re an avid fan of any of the Trinity of Sin members in their current incarnations, you might want to pick this up. Otherwise, it’s just okay.

While the narration and art is pretty good, nostalgia and a kinda goofy villain make this book nothing to write home about.