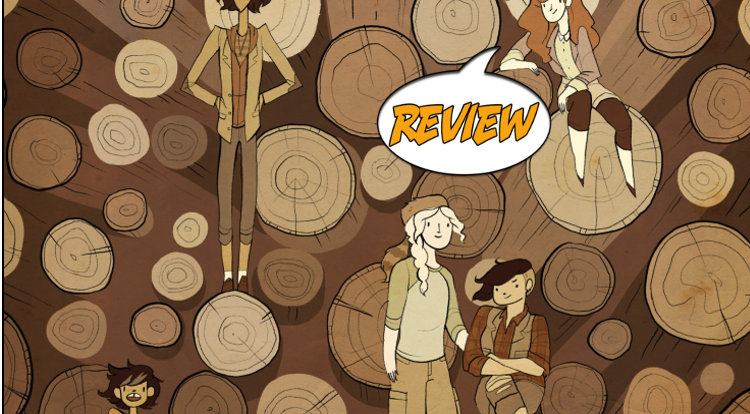 Diane suddenly becomes important as she and Jen ban together with the regular cast of Lumberjanes #7 and Jo learns the true meaning of friendship and sacrifice. Previously in Lumberjanes #6: An epic game of capture the flag reveals a deeper relationship between Diane and Jo and Mal gets to save Molly. Yay!

FRIENDSHIP TO THE MAX

Noelle Stevenson and Grace Ellis open Lumberjanes #7 with a heist! Mal, Molly, April, Jo and Ripley are joined by Jen – their councilor – and Diane – until last issue a secondary character. The girls are breaking into the cabin of Rosie – the butch head of the Lumberjanes camp – in order to retrieve a mythical, blue, glowing crystal. All of the details, of course, mean that it is very, very important.

The retrieval of the blue shiny crystal doesn’t go awesomely and Jen is forced to lie to her boss’ face and it is absolutely the most stressful and devious thing she has done to date. Everything pans out and Ripley (in a very Ripley-from-Alien-esque move), gets her sticky hands on the crystal and Lumberjanes #7 is really, really off to the races.

Exactly halfway through Lumberjanes #7 Diane the pretty mean girl takes charge of the blue crystal while Jo offers up the golden eye. This is an artifact that she has had since the fourth or fifth issue and has implicitly called a lot of the three eyed monsters to attack the Lumberjanes. When the two items are paired they create a doe who calls to “Artemis” and hops off through the forest. Suddenly, Stevenson and Ellis’ choice to name this character Diane makes a lot more sense.

April doesn’t take Jo’s deception well. As Jo’s professed “best friend” she can’t understand why possession of this article or the mythological heritage of Diane (who has a brother named Apollo and a father named Zeus and is, straight up, just a goddess). April is the most classically feminine of the Lumberjanes regular cast members – and in a nice move by the writing team the most physically strong as well – and to have her carry the righteous outrage of a teenaged girl ring true to the reader. It is over-the-top, certainly, but earned and she holds this betrayal over Jo’s head for the remainder of Lumberjanes #7.

The group of girls are forced to re-enter a cave readers will remember from the early issues of this series where they are promptly attacked by a bunch of scary magical lightning bugs. In a move of supreme cowardice for a supposedly immortal goddess, Diane forces Jo to make a final move with the magical totem the girls have carried with them throughout the issue. Despite apprehension, Jo does as she’s told to save her friends. The phrase “friendship to the max” is sprinkled liberally by Stevenson and Ellis throughout Lumberjanes #7 and in the final panels Jo makes an enormous sacrifice to preserve the mortality of her closest friends.

Throughout the Lumberjanes series Brooke Allen has been at the top of her game and Lumberjanes #7 is not different. The girls are stunning and cartoonish in they ways, each visually diverse and occasionally veering so far into the realm of the absurd that their anatomy defies gravity. Initially I found this to be jarring, but as more and more of the dark, sinister nature of Lumberjanes is revealed (tonally it’s not too far from Welcome to Night Vale), Allen’s style really serves the story well.

The mystical doe was the most stunning representation of the aforementioned sinister nature in Lumberjanes #7. It is ethereal, yet simplistic. It belongs in this world, yet it is not of this world. Allen handles the introduction of a new level of mythos with such aplomb that the doe never feels out of place, despite the fact that we have seen nothing like this in the series to date.

Lumberjanes #7 is adventure girl candy for the eyes!

THE BOTTOM LINE: CAMP WITH THE LUMBERJANES

Lumberjanes #7 is one in a long line of a great series from BOOM! Box that deserves to be read by every person reading comic books today. Plus Ripley!

Diane reveals a lot about the crazy things that have been going on at camp while Jo learns just what she is willing to do to protect her friends in another outstanding issue.