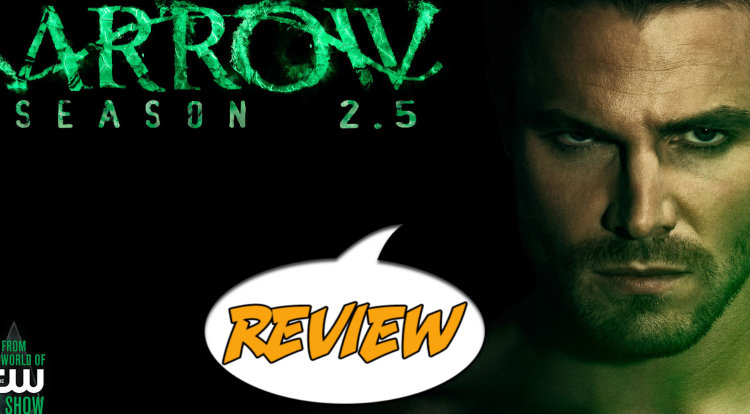 In the negative space between season 2 and season 3 DC gives us Arrow: Season 2.5 #1 written by showrunner Marc Guggenheim with a lot of Roy action this issue!

Arrow: Season 2.5 #1 is a super fun issue! I’ve dipped into official tie-in comics before and rarely found them to be of quality, but Marc Guggenheim has put a lot of things into this issue that I love about the world of Green Arrow set in the universe of the television show. In its twenty-two small pages Arrow: Season 2.5 #1 manages to be truer to the character of Oliver Queen than the latest issue of the main Green Arrow title.

Of course, Arrow: Season 2.5 #1 begins with the Oliver Queen voiceover introduction from the show, though it quickly transitions into a set up for forthcoming issues. Six years in the past, a young man name Caleb witnesses his mother being brutally beaten by his father who is obviously suffering from paranoia and anxiety, perhaps even to the point of delusion. By the end of 8 pages Guggenheim has Caleb as the only character left alive, definitely setting him up to be either the big bad of this storyline or directly tied to the big bad.

Arrow: Season 2.5 #1 continues along with Oliver and Roy swinging through the Star City skyline in the wake of a huge cargo plane. They can’t get inside the plane and Guggenheim cuts back and forth between Ollie and Roy clinging to the side of the plane and Felicity and Diggle in the foundry beneath Verdant. Felicity desperately hacks the lock open – despite a weak wifi connection – to allow the two archers to do their job. As one would expect of an Arrow writer, Guggenheim nails the voices and the dynamic between the four key members of the latest update of Team Arrow – clever, but not too clever with a touch of urgency.

Eventually, Ollie and Roy get inside the plane and they are hardly a welcome sight. South American drug smugglers and their guns are present to deal with these new intruders. Guggenheim does a great job at this point in Arrow: Season 2.5 #1 of marrying the worlds of the tv show and the classic DC comic. Oliver fires off an arrow whose tip explodes from the typical sharp arrowhead to a round, hard ball, effectively acting a first and striking the pilot in the face. Yes, it’s a boxing glove arrow in microcosm and Oliver is none too pleased when Felicity calls him out on this.

The remainder of Arrow: Season 2.5 #1 is an ongoing fight scene where Oliver and Roy struggle to subdue the drug dealers and pilot the cargo plane at the same time – and Oliver calls Roy “Speedy”! For the most part the issue is an ongoing fight scene ripped straight out of the CW show. Marc Guggenheim tells the story at a quick clip, nails the characters’ voices and drops some clever jokes. This is probably the best digital tie-in comic book I’ve ever read.

Artist Joe Bennett has a really cool style throughout Arrow: Season 2.5 #1. He doesn’t worry about aping the faces of the actors – whether that be due to licensing or as a style choice, I really enjoyed it – but the costumes of the Green and Red Arrow are straight off the small screen. As with the narrative, there are just enough ties directly back to the CW source material to comfort fans of the show.

Bennett uses great, dynamic angles to keep the lengthy fight scene from growing stale visually. The first appearance of Oliver and Roy together is a splash as they cut through the night sky (as mentioned earlier), and it is nothing short of stunning. Even in the smaller digital format the scale of his art is expansive.

Inside the plane during Arrow: Season 2.5 #1 gravity is not a kind mistress and Bennett utilizes that to his advantage to pose the characters at any angle across the panel while, at the same time, knowing exactly when to take everything else away and just let us see an arrow as it slices through the air.

THE BOTTOM LINE: THIS IS A FAST FUN ISSUE

Arrow: Season 2.5 #1 is a better issue than I anticipated. It is funny, fast and interesting and really looks good doing it. Marc Guggenheim does a great job here and Joe Bennett completes the package with aplomb. For $0.99 this story is a steal.

A really fun, action-packed direct tie-in comic written by a showrunner who really understands where the characters have come from and where they are going.