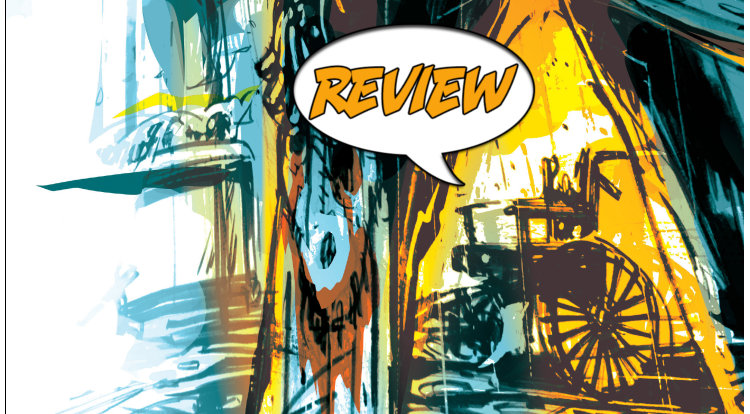 Previously in Dead Letters #4: Sam’s first case in his new “job” comes to a close as he uncovers the ultimate fate of his predecessor, “the Old Op,”—along with a secret that will blow the top off of the gang war raging across “Here.

CAN’T HIDE IN THOSE SHADOWS ANYMORE

Dead Letters #5 has been heralded as a great jumping on point for new readers and writer Christopher Sebela continues to develop the details of Sam, Fante and their world. That being said, a preexisting knowledge of Dead Letters and what it is all about certainly enhances the reading experience.

Dead Letters #5 jumps right into a phone conversation between Sam and Fante (his new boss), so that Sebela can teach readers about the new way souls are arriving “here”. Their arrival is violent, making the issue tonally sad from the first panel. Speaking further to a sense of hopelessness the new arrivals – on top of the fact that they are lined up, defeated – a new gang appears. Sebela names them the Saints of Nowhere, which is perhaps not the most subtle of potential titles, but definitely feels rock and roll in keeping with the tone of the issue … the Saints also have scary soul-destroying weaponry to add to the mix. Fante’s assignment to Sam is to figure out where the Saints weapons are coming from springing him forward into the remainder of Dead Letters #5.

Following that, we check in with Jones and Ma and pick up on their plans for Here. Unfortunately, Sebela doesn’t handle this reminder as skillfully as the exposition in the opening of Dead Letters #5 and it feels out of place and forced at best. Ma’s disdain for Jones remains firmly in place.

Continuing through Dead Letters #5 Sam’s notoriety becomes increasingly apparent. He’s no longer able to step into the shadows and play puppet master in his Constantine-inspired moves from previous issues – the residents of the Here know what he is up to. It is interesting to see a protagonist have to make this tonal shift in the space of an issue and well-handled by Sebela compared to some of the other aspects of Dead Letters #5.

Sam is forced to fight an ever-shifting world in Here, Dead Letters #5 is moderately successful in its position as a great jumping on point and Sebela has shown the depth of his plan for this story, its leading man and the world he works in.

ALL OVER THE COLOURFUL PLACE

Chris Vision is the incredibly talented artist working on Dead Letters #5. His style could easily be compared to Ben Templesmith right off the bat, but with more vibrant colour splashed across the page by colourist Matt Battaglia.

Vision gets to employ a nice visual gag right out of the boat in Dead Letter #5 – a bus driving through Here with LOOK OUT in place of its route name.

Most of Vision’s linework bleeds together and is sketchy, often without defined boundaries. This speaks to the changing nature of Here and Sam himself. As mentioned above, in Dead Letters #5 Sam undergoes a change in his approach to the tasks assign him by Fante. The limited gore he encounters is bright and startling (thanks again to Battaglia), and the violent moves characters make on each other throughout the issue highlight not only the nature of the world, but of the types of people that wind up there.

Vision’s art in Dead Letter #5 works as equal partner to Sebela’s narrative in teaching readers about this story.

THE BOTTOM LINE: NOT A BAD JUMPING ON POINT

Dead Letters #5 is really, really interesting. Sebela, Vision and everyone else working on the issue is clever and have put forward a great story, but it honestly is supported by a preexisting knowledge of the roles and regulations of Here.

A pretty good jumping on point for a story set in a complicated world beyond the veil and a shifting approach to action by the leading man.