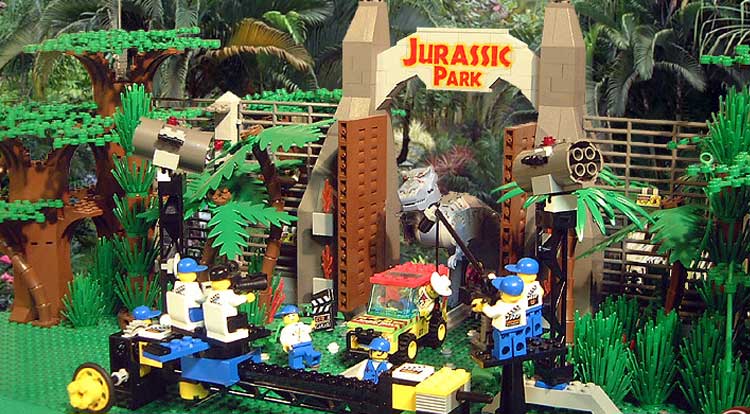 LEGO and Universal are teaming up for Jurassic World sets!

Steven Spielburg’s dinosaur world is coming back to the screen in 2015 with the Chris Pratt starring Jurassic World and to sweeten the whole deal, LEGO will be creating new sets based on the film!

The partnership between LEGO and Universal was announced just yesterday per a press release sent out by the film studio. Details are few on what sets will be created or even how many. The only piece of the puzzle that we have been given is an interview Chris Pratt did saying that he had already seen his Jurassic World character’s minifig. Which, with this new film, would make three separate characters Pratt has played that have resulted in minifig form (The LEGO Movie, Guardians of the Galaxy).

Universal has been tight-lipped out the latest installment in the Jurassic Park franchise, so it shouldn’t come as a huge surprise that no promotional images were included with the press release. However, two huge Toy Fairs are only months away so I wouldn’t be surprised if we learn more about the sets then as surely the first trailer for Jurassic World  will be released at that time.

You can read the press release of this announcement below:

LOS ANGELES, CA, Oct. 7, 2014—Universal Partnerships & Licensing (UP&L) today announced that The LEGO Group will create original LEGO® products in conjunction with the release of Jurassic World, the long-awaited next installment in Steven Spielberg’s groundbreaking film series that will be released on June 12, 2015. The LEGO Group’s participation rounds out an overall branded toy campaign designed to bring the action, adventure and excitement of the film to audiences around the world alongside global master toy licensee Hasbro. The toys will be available in May 2015. The announcement was made by UP&L President Stephanie Sperber and Jill Wilfert, vice president of global licensing and entertainment for The LEGO Group.

“Jurassic Park defined dinosaurs for an entire generation 20 years ago, and Jurassic World will
do the same in 2015,” said Sperber. “Working with LEGO Group to bring this classic into
the present in dynamic and exciting ways is truly thrilling.”

“We are thrilled to be a part of the groundbreaking Jurassic Park series,” said Wilfert. “The
film’s imagery and branding are iconic, with a rich array of landscapes, vehicles and
dinosaurs that are perfect for inspiring a line of building sets that will encourage hours of
creative play.”