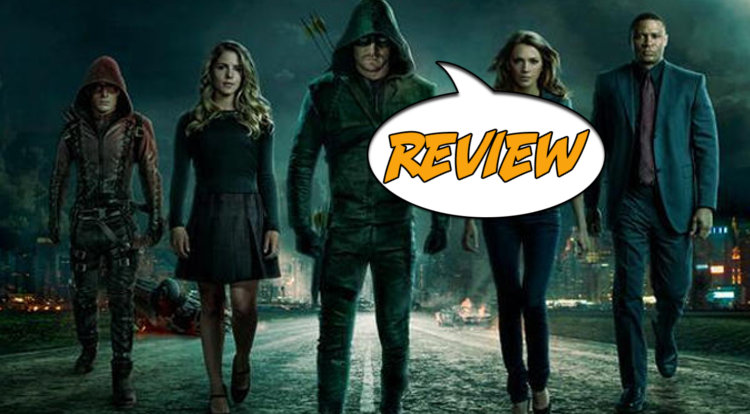 The Arrow season 3 premiere episode the Calm catches up with all of the characters in the newly rebranded Star City and dangles the beginnings of a romantic plot.

Previously on Arrow: Oliver Queen (Stephen Amell), with the help of Roy (Colton Haynes), in his first Arsenal/Red Arrow, take down Slade (Manu Bennett), in the season 2 finale, tells Felicity (Emily Bett Rickards), he loves her and saves his city.

The Arrow season 3 premiere episode the Calm brings long-time watchers to check in with the characters they are familiar with. This review will spoil events of the episode (including a major character death), so proceed from this point with that in mind.

Team Arrow steps it up in the Calm, we don’t see a lot of Roy (Colton Haynes), in his new persona as either Arsenal or Red Arrow (his moniker has yet to be determined in the show yet), but he functions well as an auxiliary team member and is able to take some responsibility off Oliver and allow him more moments of character development. I’m thrilled to have Roy here and can’t wait to see him out in the field as Arrow season 3 continues.

John Diggle (David Ramsey), has become an actual father. He was always the most level headed and grounded character, often serving the role of father figure to his emotionally crippled young team members. It’s unfortunate that his relationship with Lyla comes across as shaky at best – he refers to himself as her “boyfriend” and she refers to him as her “ex-husband” and then a doctor makes a bad joke – and the introduction of their tiny baby is certain to be the writing team’s excuse to bench Diggle in select upcoming episodes. I was further disappointed with the writers when at the top of Arrow season 3 we get another Oliver/Diggle squabble over Oliver pushing Diggle away and John insisting that he is valuable. On top of the fact that Diggle is utterly invaluable to Team Arrow, David Ramsey is strongest actor among the regular cast and it’s annoying to see him relegated to the back row over and over again.

Formerly-Detective-now-Captain Lance (Paul Blackthorne), is similarly boxed as “father”. He accomplishes lots in this episode – publicly commends the Arrow, cements a Batman/Gordon dynamic, actively brings down the villain-of-the-week – until he is hospitalized and promises Laurel (Katie Cassidy), that he will stay out of the field and will always be her father. Laurel is, predictably, a plot devise for dispensing information and, predictably, the worst performance of the entire episode.

Ray Palmer (Brandon Routh), debuts in the Arrow season 3 premiere and exists to hit on Felicity (Emily Bett Rickards), and get in Oliver’s (Stephen Amell), way. He proves from the get-go that he is not above making underhanded moves in order to acquire the information that he requires, but inherently smoother and more likeable than Ollie and is being set up as the antagonist, though not necessarily the big bad, of Arrow season 3. He is a fun and irritating character and will make a fun foil for the über-serious Oliver … and brings the name Star City to this television universe.

Speaking of Oliver, the leading man of Arrow season 3, drowning in daddy issues, is surrounded by fathers throughout The Calm. In his Hong Kong flashbacks he is held by Maseo Yamashiro (Karl Yune), under threat from Amanda Waller; in the present day he struggles with Diggle’s new position and Quentin Lance’s mounting health problems. Oliver’s external issues with these paternal men may be referred to in a future storyline if the writers give us Connor Hawke (whose existence has been teased), and nicely mirrored his internal struggle: Oliver versus the Arrow.

In a move to keep the fangirls and CW viewers compliant, Oliver takes Felicity out on a date in the episode’s opening scenes – needless to say, something goes wrong. With Felicity as the representation of his normal-life-as-Oliver-Queen he loses control and confidence in that situation, then he loses control of Queen Consolidated a further representation of his normal-life-as-Oliver-Queen and must take physical action to stop Count Vertigo version 2.0 (who is cartoonish and largely unnecessary).

One of the things that the Arrow writing team does very well is Oliver suffering and The Calm has that in spades. Stephen Amell has really grown into his role as leading men and does a great job at portraying the combating duel natures of this character’s existence (both internally and externally). For the most part, the rest of the cast give great performances and are fun to watch throughout the Arrow season 3 premiere.

Something else the Arrow writers do very well is surprises. They take lots of sharp turns that confront viewers expectations, never allowing us to become complacent in the things that we think we know about Arrow … and at the end of the Calm they kill Sarah/the Canary. Unequivocally, she’s dead and not coming back. It was shocking and complete and serves so many purposes that do speak to the fact that the writing team is playing the long game. With Sarah’s (Caity Lotz), death Oliver now has a revenge quest to pursue moving forward, Oliver’s romance with Felicity will be put on the backburner for fear of her coming to harm and, with Sarah now gone (save, perhaps, for occasional flashbacks), the way is paved for Laurel to take up the mantle of the Canary.

The Calm, the Arrow season 3 premiere, is a great episode. It catches us back up following the summer off, the Arrow punches a bunch of guys and our expectations will have to shift in an exciting way going forward.

Vieweres check in with Oliver, Felicity, Diggle and co., we meet Ray Palmer and an important character dies.