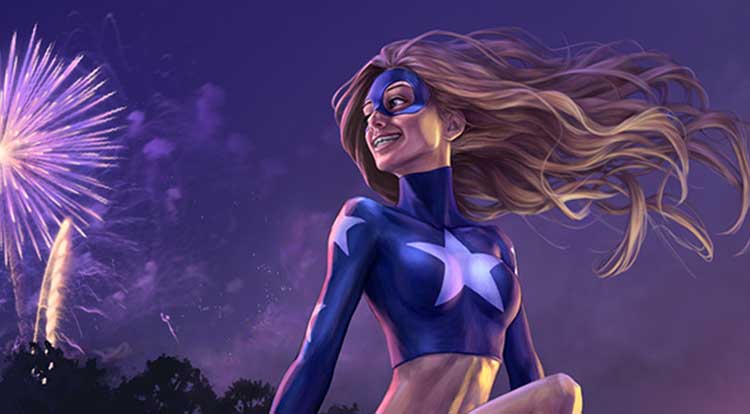 The latest champion from Infinite Crisis has been revealed – Stargirl! Warner Bros. Interactive Entertainment sent us a look at the superhero in the free to play MOBA game that arrives on October 15th.

Unlike other heroes, the event leading Courtney Whitmore to becoming a hero wasn’t tragedy. Instead, it was the breakup of her parent’s marriage and her mother’s remarriage to a man named Pat Dugan.

Courtney was miserable in her new life and blamed her stepfather. One day, looking through Pat’s belongings, she stumbled across the gear of ‘The Star-Spangled Kid’ and realized that Pat had once been the adult sidekick of a teenage hero. To make a mockery of Pat, she took his old gear to a school dance. Unfortunately, detecting someone wearing the Kid’s gear, one of Kid’s old enemies thought there was a new Star-Spangled Kid and attacked the dance. Pat came to Courtney’s aid in a suit of mechanized battle armor he had been secretly working on and the two defeated the old foe.

Exhilarated by the battle, Courtney decided to continue as a hero. Seeing how well she’d handled herself, and how it could help them grow closer as father and daughter, Pat agreed. However, there was one condition: He would have to fight alongside her as her guardian. Amused that he would now be her sidekick, Courtney agreed and took a shorter heroic name: Stargirl.

Check out the new Champion profile video via the link and embed code below, along with the accompanying character bio and key art.

Entrusted with the Cosmic Staff, teenager Courtney Whitmore, blasts her way into Infinite Crisis as the super-powered Stargirl on October 15th!Want to wield …