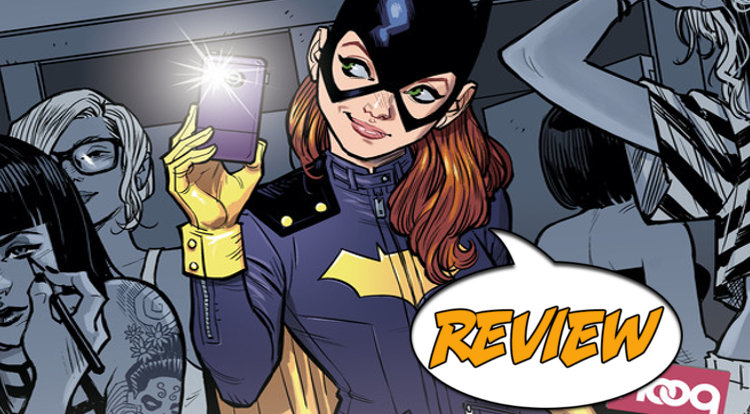 Previously in Batgirl #34: After issues and issues of dark, gritty Batgirl by Gail Simone DC tosses a new creative team into the mix and we get a selfie cover!

Cameron Stewart and Brenden Fletcher share writing duties on Batgirl #35 and it is definitely not Gail Simone’s Batgirl. I have to say that I, personally, find that to be a relief. Batgirl #35 is lighter tonally, Babs is brighter and happier and slang is scattered liberally throughout the issue. That in mind, as a female in her 20s I can unequivocally say that we don’t speak the way the characters in this issue do and I have a real problem with that (what does “bae” mean?).

Batgirl #35 opens with Barbara moving into her new apartment in the hip up-and-coming Gotham neighbourhood that no one has ever heard of before – Burnside. She has a forgettable roommate who insists on popping up throughout the issue to add nothing to the plot nor to reveal anything about either herself – or Barbara – as a character and might as well have been called Pants (to borrow a phrase from the Oatmeal). Babs then goes on to spend most of the opening hung over and embarrassed.

The issue begins to pick up when Barbara chases a thief out of a local Burnside coffee shop and beats the snot out of him in an alleyway, despite the fact that this sequence has one of the worst lines in all of Batgirl #35 – “I’m legal, loser.” Further promise arrives in the form of Black Canary sitting on Barbara’s steps begging for a place to crash and revealing the loss of Batgirl’s costume, which later goes on to prompt the quick redesign of the costume that got myself and so many other readers excited months ago.

Rumours swirl throughout Batgirl #35 of a hacker named Riot Black who reveals people’s deeply personal information – most of which is hacked or illegally obtained – on his website. Barbara gets to be Batgirl for a second and do a lot of brilliant deduction work in order to track down Riot Black and essentially hack his brain. Her own brand of hacking is exciting because it calls back to her roots as Oracle – even if that doesn’t really exist in the current New 52 timeline.

Stewart and Fletcher pin Batgirl at her best – junior detective, incredibly intelligent, sweetly feminine – but they burry a lot of the brilliant parts of Batgirl #35 under colloquialism that are going to date this issue and make it inaccessible in under a year. I wish they would fixate less on being so desperately different from Gail Simone and celebrate what they love about the character with their own unique spin. It was not the issue I was hoping for, but there is definitely something here.

Much like the narrative, Babs Tarr’s art has a lot of promise. Many pages have absolutely too many panels crammed onto them (which I fault Cameron Stewart for credited with layouts), and as a result the micro-panels feel crammed and the art not as flushed out as with as much detail as it ought to have been.

The best thing on the page, when she appears, is Black Canary. Even more than Barabara, Dinah is striking. Tarr understands the characters inherent energy and translates that so far as her stance throughout Batgirl #35. She instantly draws the eye and looks better than Dinah has looked in the entirety of the New 52.

The costume – we must address it. Although I don’t like the fact that it is construction in a splash page montage halfway through Batgirl #35 (we don’t even see Batgirl until page 14), it is amazing – easily the best visual aspect of the issue. It reads as functional, yet stylish with enough notes taken from Batman’s classic design to resonate long-time Batfans.

THE BOTTOM LINE: NOT A GREAT FIRST ISSUE

Batgirl #35 is the very definition of an okay first issue. There are some good ideas and some strong images with problems piled on top of them. If, like me, you’ve really built this issue up, then it can be difficult to see the forest for the trees. I’m in for the next few issues and hope the more compelling aspects are played up and Cameron and Fletcher let Babs talk like a normal person rather than an affected stereotype.