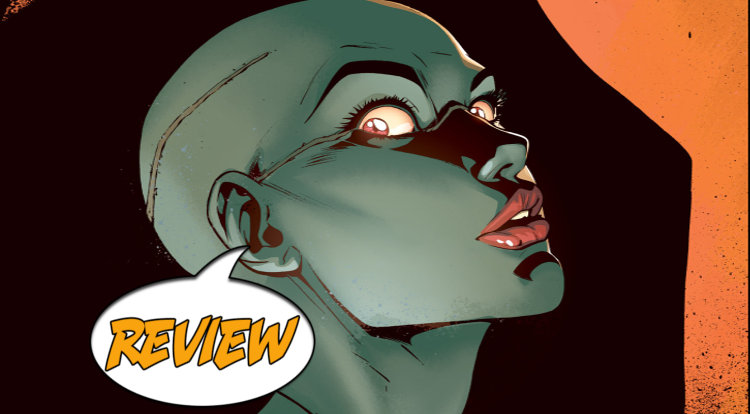 Madame Frankenstein #6 is a story in rivalry as Henry and Vincent face off along with two ladies later on in the issue. AN ISSUE OF RIVALS

Writer Jamie S. Rich has something interesting to say about human nature and the way we compare ourselves to our rivals in the pages of Madame Frankenstein #6. Vincent, bitterly unhappy with his Creature, tosses her down a flight of steps and into Irene’s basement, holds her in place with a tiny lit flame (a nice hold over from Mary Shelley’s classic Creature and his fear of fire). The Creature is to be punished and learn her place in the world. Already in the opening pages of Madame Frankenstein #6 she has been declared a failed experiment and reader resentment for Vincent is high.

Madame Frankenstein #6 continues with Vincent being called away via telegram to meet Henry in Courtney’s grave (Courtney being the woman who has since become Vincent’s Creature), and the men show down in a classic literary move. Writer Rich takes this opportunity to do a little bit of an exposition dump and explain to readers Vincent’s life before the beginning of this series. Tragic flaws come to the surface: alcoholism, drug abuse, thievery and the death of Courtney.

Henry comes right out, just over halfway through Madame Frankenstein #6, and reveals that Vincent was intoxicated, crashed the car and Courtney died. It’s not a leap of logic to assume this accident as the catalyst for this story.

Meanwhile, in a nicely employed mirror plot on Rich’s behalf, Vincent’s latest flame Linda Ruby let’s herself into Irene’s home (and basement), to face off against the shunted Creature. Rather than being empathetic – or even fascinated – Linda is cruel. She speaks to the Creature as if she were an uncomprehending child, an animal in a zoo to be gawked at and examined for one’s own amusement. In a way she is very much perfect for Vincent, a lot of flare and little worthwhile substance.

That being said, the titular character of Madame Frankenstein #6 can very much take care of herself and elects not to be afraid anymore in her dealing with Linda as an extension of Vincent in the closing pages of the issue. For Vincent himself, he spends the end of Madame Frankenstein #6 wallowing in a drug-induced swell of self-pity in the light of a violent act I won’t spoil for you here. The issue ends with force and fire and Vincent and the Creature physically close, but emotionally alone.

Rich has penned an outstanding issue in Madam Frankenstein #6 that nicely builds upon the story published thus far that really deserves to be read by more people.

Where has Megan Levens been hiding? This woman is an amazing talent! Madame Frankenstein #6 is a black and white issue filled with splash pages, clever use of negative space and a low number of panels on the page and it is beautiful.

Levens employs a clean art style that uses the bare minimum number of lines necessary to demarcate a face. That being said, nobody wear the same face. Vincent and Henry are both young, good-looking men, but Levens outlines their jaws and the sweep of their hair, so they stand out as separate characters clearly, rather than blending into one another.

As for her women, Irene, Linda and the Creature have similar hairstyles and are all beautiful in their way. When one considers the ladies of Madame Frankenstein #6 in relation to Vincent it makes sense that he would attach himself to familiar features and highlights. However, as with Henry and Vincent, the three ladies stand out as stunning individuals.

Madame Frankenstein #6 illustrates artist Levens’ skill in dealing with light and dark. When Vincent screams at the Creature she draws him in heavy shadows, the Creature illuminated in her innocent fear. Henry’s car as he begins his antagonism of Vincent emerges from a shadow-y alley and as Linda creeps into Irene’s house to face down the Creature she is nothing but a silhouette, still hidden away in darkness as the Creature leans away from her in the light.

As with Rich’s clever use of plotting and comparison, Megan Levens has put a lot of thought into everything she put on the pages of Madame Frankenstein #6.

Madame Frankenstein #6 – and the entire series for that matter – is beautiful, clever, well-conceived story. The characters are interested and they play on familiar story points and characters readers know from Mary Shelley’s classic Frankenstein or the Universal Monster Movies. It is a refined, visually dynamic and exciting comic. Read it!

A stunningly beautiful issue where two pairs of rivals enter and only two are like to survive. This issue is more clever, more lovely and more well thought out than you may think.