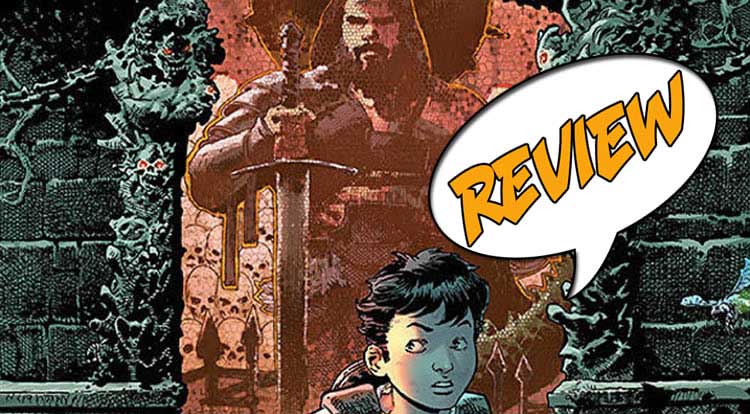 There’s nothing more fun to read that a writer who can work in different genres. That’s why I’m really coming to be a big fan of Joshua Willliamson.

This week, his newest title, Birthright, hits the stands. It’s very much an adventure/fantasy tale, complete with a great unexpected twist at the end. You get 40 pages for $2.99, and it’s a great read, of course!

Previously in BIRTHRIGHT: “For the Rhodes family, losing their son was the most devastating thing that could’ve ever occurred… but it couldn’t prepare them for what happened when he returned. Skybound’s newest original series turns fantasy into reality in this EXTRA-SIZED FIRST ISSUE for just $2.99.”

As I mentioned in a previous review, I first came across Mr. Williamson’s writing when he was creating Masks and Mobsters at monkeybraincomics.com. It’s a mixture of crime noir and superheroes, and I’m not the only one here at MajorSpoilers who adored this series.

Next, I found out he was working on Captain Midnight, a revival of a superhero from the 1940s for Dark Horse, which I also really enjoy. Then he came out with Image’s Ghosted, a supernatural mystery book that had me baffled! I couldn’t, for the life of me, figure out how someone could steal a ghost! In the fifth issue, Williamson showed me how.

Then Nailbiter came out from Image. It has to do with serial killers who are mostly all born in a small town named Buckaroo. I thought, “Well, he’s done great so far, there has to be a lemon in the bunch.” Nope, not even close. I’m now hooked into that book as well.

So, Birthright is now out, and it’s something very different from all the rest. I love it when a writer can script many different kinds of stories, and that’s what Mr. Williamson is proving he can do very well.

I really like the characters in this book, including Mikey’s family. A young boy playing catch with his father on his birthday, Mikey looks for a lost baseball in the woods when he disappears. We see the grief of the family, most closely his brother, who’s still hurting (and being teased) a year later.

We also see that the loss of their son has caused a huge rift in the Brennan family, with the father unable to cope with the loss. It causes Mikey’s mother to file for divorce on the anniversary of their son’s disappearance – talk about bad timing!

But things take an unexpected turn when an adult male shows up that has some kind of connection to Mikey’s disappearance. Did he do something to the boy or, strangely enough, is HE actually the child who vanished a year before?

Williamson displays his mastery of character and drama in this issue, first setting up what happened on “our” world, then showing us what Mikey experienced. I couldn’t wait to see what happened on the next page!

The artwork from Andrei Bressen and Adriano Lucas is really powerful, and I particularly was taken by the panel in which Mikey’s dad is calling for his son in the forest. It appears more than once in this book, and it is used very effectively.

There’s a darkness in the police HQ where we first encounter the older man who seems to have ties to Mikey’s disappearance. It adds to the sense of drama we’re feeling. But then, we shift to where the boy went to, and the art (particularly the color scheme) is much more vibrant and dynamic, fitting the mood of the tale being told.

But it’s the last two pages that are sticking in my head, when the big reveal happens. VERY nicely done, especially on the final page when we get a pretty clear idea just what’s happening. Wow!

It’s often very difficult to judge the first issue of a series. Will it be good as the story progresses? Will we get great payoffs along the way? I often struggle with evaluating premieres.

That’s not my reaction to the debut of Birthright! It pulled me in and won’t let me go! As I often say, I love variety in my storytelling, and this book is the perfect kick-off to an action/adventure/fantasy story that I can’t wait to read more of!

I have to say, if you see the name Josh Williamson on the cover of a comic, buy it! You may be surprised by what genre story he’s telling, but you won’t be disappointed! Be sure to pick up Birthright #1 so you can get into this book on the ground floor! It’s terrific!

If you see the name Josh Williamson on the cover of a comic, buy it!